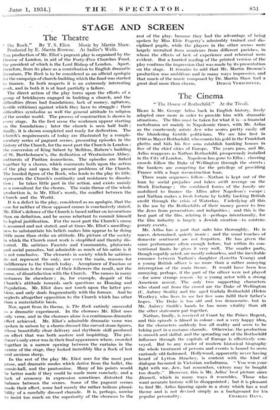 " The House of Rothschild." At the Tivoli.

HERE is Mr. George Arliss back in English history, freely adapted once more in order to provide him with dramatic

situations. The film must be taken for what it is—a financial

melodrama set mainly in Napoleonic times, with Mr. Arliss as the courteously astute Jew who scores pretty easily off

the blundering Gentile politicians. We see him first in 1780 as Mayer Rothschild, who counts his gold in the Frankfurt ghetto and bids his five sons establish banking houses in five of the chief cities of Europe. The years pass, and Mr.

Arliss reappears as Nathan Rothschild, prosperously installed in the City of London. Napoleon has gone to Elba ; cheering crowds follow the Duke of Wellington through the streets ; the bankers are competing for the privilege of providing France with a huge reconstruction loan.

Three main sequences follow—Nathan is kept out of the loan by social prejudice and takes swift revenge on the Stock Exchange ; the combined forces of the family are mobilized to finance the Allies after Napoleon's escape.; and Nathan makes a fresh fortune by boldly backing British credit through the crisis of Waterloo. Underlying all this is the use by the R othsehilds of their money power to free the Jews from persecutions and indignities ; and this is the best part of the film, rela ling it—perhaps intentionally, for the film industry is largely a Jewish creation—to contem- porary events.

Mr. Arliss has a part that suits him thoroughly. He is suave, determined, quietly ironic ; and the usual touches of domestic sentiment are not forgotten. He has given the same performance often enough before, but within its con- ventional limits he gives it very well. The smaller parts, though capably acted, are mostly colourless, and the inevitable romance letween Nathan's daughter (Loretta Young) and a young British officer is no more than a rather annoying

interruption of the main theme. It would have been less annoying. perhaps. if the part of the officer were not played —for some strange reason—by a young actor with a strong American accent. The only two supporting characters

who stand out from the crowd arc the Duke of Wellington (C. Aubrey Smith) and the aged Gudula Rothschild (Helen Westley), who lives to sec her five sons fulfil their father's hopes. The Duke is too old and too democratic, but in Mr. Aubrey Smith's hands he has more vitality than all the other statesmen put together.

Nathan, finally, is received at Court by the Prince Regent, and this episode is filmed in colour—not a very happy idea, for the characters suddenly lose all reality and seem to be taking part in a costume charade. Otherwise, the production is smooth and skilful, and the spreading out of the Rothschild influence through the capitals of Europe is effectively con- veyed. But to any reader of modern historical biography the whole treatment of persons and events is bound to seem curiously old-fashioned. Hollywood, apparently never having heard of Lytton Strachey, is content with the kind of dialogue favoured in Victorian melodrama. " You won your fight with me, Jew, but remember, victory may be bought

too dearly." However, this is Mr. Arliss' best picture since Disraeli, which in many ways it resembles. Those who

want accurate history will be disappointed ; but it is pleasant to find Mr. Arliss figuring again in a story which has a real theme and is not devised simply as a background for his