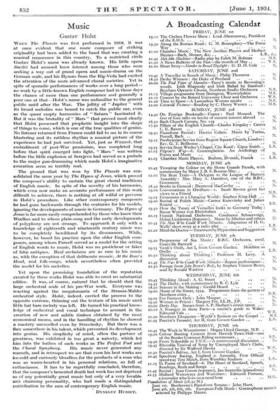 WHEN The Planets was first performed in 1919, it was at once evident that one more composer of striking

originality had been added to the band that was creating a musical renascence in this country. To a restricted circle Gustav Hoist's name was already known. His little opera Sauna had aroused keen interest among those who were seeking a way out of grand opera and music-drama on the German scale, and his Hymns from the Rig-Veda had excited the attention of the more advanced choral societies. Yet in spite of sporadic performances Of works over a long period- no work by a little-known English composer had in those days the chance of more than one performance and generally a poor one at that-Hoist's name was unfamiliar to the general public until after the War. The jollity of " Jupiter " with its broad melodies was bound to catch the public ear, even as the queer empty harmonies of " Saturn " fascinated it. But it was the brutality of Mars " that proved most clearly that Hoist possessed that prophetic insight into the shape of things to conic, which is one of the true qualities of genius. No listener returned from France could fail to see in its coarse blustering and its ruthless rhythm a musical picture of the experience he had just survived. Yet, just as Wozzeck, that embodiment of post-War pessimism, was completed long before that spirit emerged into light, " Mars " was written before the little explosion at Serajevo had served as a prelude to the major gun-drumming which made Hoist's imaginative evocation seem so terribly reaL The ground that was won by The Planets was con- solidated the same year by The Hymn of Jesus, which proved the composer's ability to sustain the great choral traditions of English music. In spite of the novelty of his harmonies, which even now make an accurate performance of this work difficult to achieve, there is nothing at all wilful or perverse in Hoist's procedure. Like other contemporary composers he had gone backwards through the centuries for his models, ignoring the developments of music in Germany. The Hymn of Jesus is far more easily comprehended by those who know their Weelkes and to whom plain-song and the early developments of polyphony are not strange. To approach it only with a knowledge of eighteenth and nineteenth century music was to be completely bewildered by its dissonances. While, however, he based his practice upon the older English com- posers, among whom Purcell served as a model for the setting of English words to music, Hoist was no pasticheur or faker of false antiques. Real archaisms are as rare in his music as, with the exception of that deliberate mosaic, At the Boar's Head, real folk-songs, which nevertheless often provided the model for his melodies.

Yet upon the promising foundation of the reputation created by these works Hoist was able to erect no substantial edifice. It was, of course, natural that he should shed the large orchestral scale of his pre-War work. Everyone was reacting against the megalomania of the Strauss-Mahler orchestral style. Hoist, indeed, carried the process to the opposite extreme, thinning out the texture of his music until little but bare melody was left. He turned his practical know- ledge of orchestral and vocal technique to account in the creation of new and subtle timbres obtained by the most economical means, and in the handling of rhythm he showed a mastery unexcelled even by Stravinsky. But there was a flaw somewhere in his talent, which prevented its development into genius. His simplicity of mind, often the partner of greatness, was exhibited in too great a naivety, which led him into the bathos of such works as The Perfect Fool and

the Choral Symphony. His music never generated any warmth, and in retrospect we see that even his best works are ice-cold and curiously bloodless for the products of a man who was so warm-hearted in his personal relations, so full of enthusiasms. It has to be regretfully concluded, therefore, that the composer's lamented death last week has not deprived us of any potentially great music but only of a very lovable anii charming personality, who had made a distinguished contribution to the sum of contemporary English music.