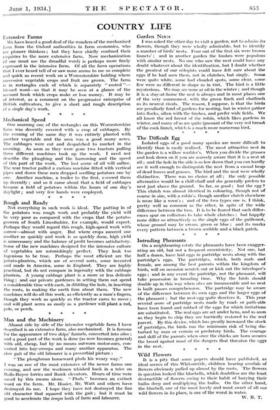 Garden Nests I was asked the other day to visit

a garden, not to admire its flowers, though they were wholly admirable, but to identify a number of birds' nests. Four out of the first six were brown linnets' ; and in another garden the bushes were populous with similar nests. No one who saw the nest could have any doubt whatever about the identification, but I doubt whether the greatest of our otilogists could have felt sure about the eggs if he had seen them, not in clutches, but singly. Some were quite white, some had clouded spots, some clear, some few were as different in shape as in tint. The bird is a little mysterious. We may see none at all in the winter ; and though it is a stay-at-home the nest is always and in most places one of the very commonest, with the green finch and chaffinch as its nearest rivals. The reason, I suppose, is that the birds are peculiarly fond of gardens for nesting, but in winter gather into flocks, often with the finches, and prefer wide fields. We all know the red breast of the robin, which likes gardens in winter, and many of us are quite ignorant of the very red breast of the cock linnet, which is a much more numerous bird.