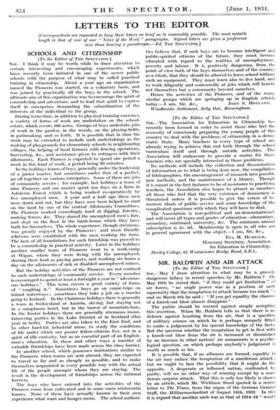 [Correspondents are requested to keep their letters as brief as is reasonably possible. The most suitable length is that of one of our News of the Week " paragraphs. Signed letters are given a preference over those bearing a pseudonym.—Ed. THE SPECTATOR.] SCHOOLS AND CITIZENSHIP [To the Editor of THE SPECTATOR.] think it may be worth while to draw attention to certain interesting and encouraging experiments, which have recently been initiated in one of the newer public schools with the purpose of what may be called practical training in citizenship. About a year ago an organization named the Pioneers was started, on a voluntary basis, and was joined by practically all the boys in the school. The ultimate aim of this organization was to encourage the spirit of comradeship and adventure, and to lead that spirit to express itself in enterprises demanding the subordination of the interests of the individual to the group.

During term-time, in addition to physical training exercises, a variety of forms of work are undertaken on the school- estate, which covers 400 acres. Groups of boys undertake jobs of work in the garden, in the woods, on the playing-fields, in pathmaking, and so forth. It is possible that in time the work may be extended to include such undertakings as the making of playgrounds for elementary schools in neighbouring villages, the helping of local farmers with fencing operations, harvesting, &c., and assistance given to cottagers with their allotments. Each Pioneer is expected to spend one period a week in this kind of work, a period being 90 minutes.

In the holidays teams of boys, generally under the leadership of a junior master, but sometimes under that of a prefect, go off together on various enterprises. Some of these are jobs of community service ; for example, last holidays a team of nine Pioneers and one master spent ten days on a farm in Ashdown Forest which is being worked co-operatively by five unemployed men. A year and a half ago :these men were down and out, but they have now been helped to start on the land by one of the central Allotments Committees. The Pioneers worked exceedingly hard at digging, forestry, making fences, &c. They shared the unemployed men's fare, and slept on the floor in the bunk-house which they have built for themselves. The whole experience, though strenuous, was greatly enjoyed by the Pioneers ; and most friendly relations were established with the men working the farm. The best of all foundations for such friendship was proved to be a comradeship in practical activity. Later in the holidays another smaller team of Pioneers went to a work-camp at Wigan, where they were living with the unemployed, sharing their food as paying guests, and working six hours a day on the allotments of sick or disabled unemployed miners.

But the holiday activities of the Pioneers are not confined to such undertakings of community service. Every member is encouraged to spend at least a fortnight a year in " adventur- ous holidays." This term covers a great variety of forms of " roughing it." Sometimes boys go on canoe-trips on inland waterways ; sometimes they take a job on a trawler going to Iceland. In the Christmas holidays there is generally a team in Switzerland or Austria, ski-ing, but staying not in a sumptuous hotel, but in the barest of mountain-huts. In the Easter holidays there are generally strenuous moun- taineering parties in the Lake District or in Scotland (this year in both). Parties are also taken to the East End, and to other hard-hit industrial areas, to study the conditions of life under which our poorer fellow-citizens live, not in a spirit of idle curiosity, but as an essential part of an English- man's education. In these and other ways a number of valuable friendships have been made across the class barrier.

In another school, which possesses institutions similar to the Pioneers, when teams are sent abroad, they arc expected to travel as far and as cheaply as possible, and to make themselves acquainted in every possible way with the actual life of the people amongst whom they are staying. The result is the development of friendships across the national barriers.

The boys who have entered into the activities of the Pioneers come from cultivated and in some cases aristocratic homes. None of thein have actually knOWn. --in- their- own • experience what want and hunger mean. The school authori-

ties believe that, if such boys are to become intelligent and public-spirited citizens of - the future, they must become educated with regard to the -realitieri of unemployment, poverty and labour. It is positively dangerous, from the point of view both of the boys themselves and o(the country as a whole, that they should be allowed to leave school without such an equipment. They must learn also to live hard; and to work diligently and contentedly at jobs which will benefit not themselves but a community beyond ourselves.

Hence the activities of the Pioneers, and of the many similar groups which are springing up in -English schools