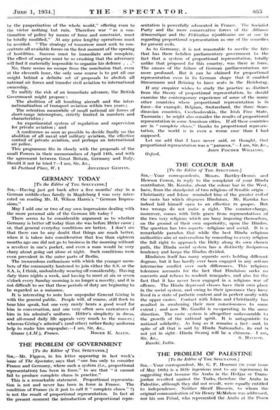 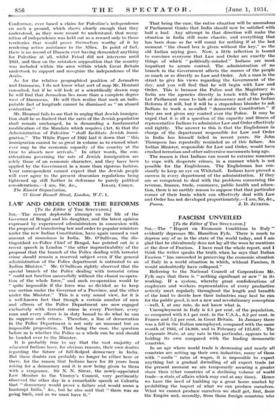 SIR,—Your correspondent, Mr. G. F. Hourani (in your issue of May 18th) is a little ingenious (not to say ingenuous) in suggesting that because the Arabs in the Hedjaz or Trans- Jordan revolted against the Turks, therefore the Arabs in Palestine, although they did not revolt, were equally entitled .to independence. Neither Sherif Hussein, to whom the original communication of Sir Henry McMahon was addressed, nor his son Feisal, who represented the Arabs at the Peace

Conference, ever based a claim for-Palestine's independence on such a ground, which shows clearly enough that they understood, as they were meant to understand, that recog- nition of independence was held out as a reward only to those territories that would prove themselves worthy of it by rendering active assistance to the Allies. In point of fact, there is no record of Hussein ever having demanded anything for Palestine at all, whilst Feisal did not intervene until 1921, and then on the mistaken supposition that the country was included within the area within which Great Britain undertook to support and recognize the independence of the Arabs.

As for the relative geographical position of Jerusalem and Damascus, I do not know what sort of map Mr. Hourani consulted, but if he will look at a scientifically drawn map he will find that Jerusalem lies more than a complete degree west of Damascus. He will then realize that such an indis- putable fact of longitude cannot be dismissed as " an absurd contention."

Mr. Hourani fails to see that in urging that Jewish immigra- tion shall be so limited that the ratio of the Jewish population shall remain unchanged, he is demanding a fundamental modification of the Mandate which requires (Art. 6) that the Administration of Palestine " shall facilitate Jewish immi- gration." The White Paper of 1922 laid it down that " this immigration cannot be so great in volume as to exceed what- ever may be the economic capacity of the country at the time to absorb new arrivals." In other words, the con- siderations governing the rate of Jewish immigration arc solely those of an economic character, and they have been applied by the Government in a more than rigorous fashion. Your correspondent cannot expect that the Jewish people will ever agree to the present draconian regulations being tightened up still further in deference to purely political considerations.—I am, Sir, &c., IsitAEL CouEN. The Zionist Organization,