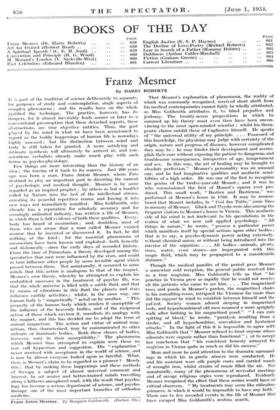 By HARRY ROBERTS h• is part of the tradition of science deliberately to separate, for purposes of study and contemplation, single aspects of complex phenomena ; and the results have on the whole justified the technique. The practice, however, has its dangers, for it almost inevitably leads sooner or later to a conventional presumption that these detached aspects, these abstractions, are true objective entities. Thus, the part played by the mind in what we have been accustomed to regard as the bodily happenings of human life is nowadays highly assessed ; but the distinction between mind and body is still taken_ for granted. A more satisfying and intimate synthesis will ultimately be arrived at, and con- scientious verbalists already make much play with such terms as psycho-physiology.

Few things are more interesting than the history of an idea ; the tracing of it back to its sources. Just 200 years ago was born a man, Franz Anton Mesmer, whom Fate destined to play an important part in diverting the current of psychologic and medical thought. Mesmer is by some regarded as an inspired prophet ; by others as but a boulder rolled by Nature into the bed of the intellectual stream, arresting its peaceful repetitive course and forcing it into new ways not immediately manifest. Miss Goldsmith, who already has a reputation for scholarly accuracy and for seemingly unlimited industry, has written a life of Mesmer, in which there is full evidence of both these qualities. Every- body has heard of mesmerism ; and, doubtless, most of those who are aware that a man called Mesmer existed assume that lie invented or discovered it. In fact, he did nothing of the kind ; for the essential phenomena of mesmerism have been known and exploited—both honestly and dishonestly—since the early days of recorded history. From the time of Paracelsus, a theory developed among the speculative that men were influenced by the stars, and could in turn influence other people by some invisible agent which passed between them. Not unnaturally, it occurred to some . minds that this action is analogous to that of the magnet. Mesmer's own theory, whereby he attempted to explain his undoubted successes in the treatment of psychic ills, was that the whole universe is filled with a subtle fluid, and that by means of vibrations in this fluid the planets and stars influence earthly activities ; whilst, in the same way, one human body is magnetically " acted on by another. " This property of the human body which renders it susceptible of the influence of the heavenly bodies, and of the reciprocal action of those which environ it, manifests its analogy with the magnet, and this has decided me to adopt the term of animal magnetism. The action and virtue of animal mag- netism, thus characterized, may be communicated to other animate or inanimate bodies. Both these classes of bodies, however, vary in their susceptibility." The phenomena which Mesmer thus attempted to explain were those we now call hypnotism and suggestion. His " explanation " never received wide acceptance in the world of science, and is now by almost everyone looked upon as fanciful. What, then, is Mesmer's claim to be regarded as a pioneer ? Merely this : that by making these happenings and these methods of therapy a subject of almost universal comment and interest, he set acuter and better-trained minds travelling along a hitherto unexplored road, with the result that psycho- logy has become a serious department of science, and psycho- therapy one of the most important branches of orthodox medicine.

Franz Anton Mesmer. By Margaret Goldsmith. (Barker. 10s.) That Mesmer's explanation of phenomena; the reality of which was commonly recognized, received short shrift from his medical contemporaries cannot fairly be wholly attributed, as Miss Goldsmith attributes it, to blind prejudice and jealousy. The twenty-seven propositions in -Which he summed up his theory must even then have been uncon- vincing to the most open-minded scientist ; whilst his thera- peutic claims outdid those of Cagliostro himself. He speaks of " the universal utility of my principle. . . . Possessed of this knowledge, the physician may judge with certainty of the origin, nature and progress of diseases, however complicated they may be ; he may hinder their development and accom- plish their cure without exposing the patient to dangerous and troublesome consequences, irrespective of age, temperament and sex. In this way, the artt of healing may be brought to absolute perfection." Mesmer's personality was an unusual one, and he had imaginative qualities and aesthetic sensi- bilities of a high order. He was one of the first to recognize the genius of the twelve-year-old Mozart ; and it was he who commissioned the first of Mozart's operas ever pro- duced. This small work, " Bastien and Bastienna," was performed at Mesmer's home in 1768. It may be remem- bered that Mozart includes, in " Cosi fan Tate," some lines in memory of Mesmer. Gluck and Haydn were also among the frequent visitors to Mesmer's house in Vienna. This aesthetic side of his mind is not irrelevant to his speculations in the realms of what we now call applied psychology. " All things in nature," he wrote, " possess a particular power which manifests itself by special actions upon other bodies ; that is to say, a psycho-dynamic power acting exteriorly, without chemical union, or without being introduced into the interior of the organism. . . . All bodies—animals, plPnts, trees, water, even stones—are impregnated with this magic fluid, which may be propagated to a considerable distance."

Though the medical pundits of the period gave Mesmer a somewhat cold reception, the general public received him as a true magician. Miss Goldsmith tells us that " his practice in Vienna grew so rapidly that he could not receive all the patients who came to see him. . . . The magnetized trees and ponds in Mesmer's garden, the magnetized chairs

in his consulting-room, intrigued the Viennese far more than did the rapport he tried to establish between himself and the patent. Society women adored sleeping in magnetized beds, and hypochondriacal old men assumed a more sprightly walk after bathing in his magnetized pond." " I can cure spitting of blood," he wrote, "paralysis resulting from a stroke, and all hypochondriac, convulsive and hysterical attacks." In the light of this it is impossible to agree with Miss Goldsmith that "Mesmer refused to treat anyone whose ailments were organic rather than functional " ; or to accept her conclusion that " his consistent honesty annoyed his confreres in Vienna quite as much as did his success."

More and more he paid attention to the dramatic surround- ings in which his m .gnetic seances were conducted. He and his assistant wore silk purple coats and carried wands of wrought iron, whilst strains of music filled the air. Not unnaturally, many of the phenomena of revivalist meetings and of savage religious orgies were reproduced. Evidently Mesmer recognized the effect that these scenes would have on critical observers. " My treatments may seem like ridiculous grimaces, in which it would be impossible to have any faith:' There can be few recorded events in the life of Mesmer that have escaped Miss Goldsmith's zealous search.