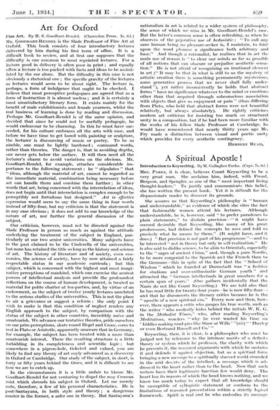 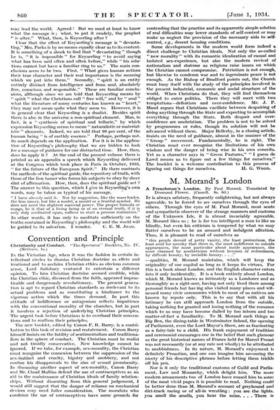 Introduction to Keyserling. By M. Gallagher Parks. (Cape. 7s. 6d. ) Mits. PARKS, it is clear, believes Count Keyserling to be a very great man. She acclaims him, indeed, with Freud, Bergson, and Spengler, as one of the " most important living thought-leaders." To justify and communicate this belief, she has written the present book. Yet it is difficult for the dispassionate reader to discover its grounds.

She assures us that Keyserling's philosophy is " huthan and understandable," as evidence of which she cites the fact that fashionable women attend his lectures. Although understandable, he is, however, said " to prefer paradoxes to plain statements," to disdain precision—" it might have seemed desirable that Keyserling, like many of his great predecessors, had defined the concepts he uses and told us precisely what he means by them." (It might have, and it does.) " But precision is not part of his programme "—and to be interested " not in theory but only in self-realization." He is also said to dislike science, to be akin to Orientals, especially to the " sages of ancient China," and, though a pure Nordic, to be more congenial to the Spanish and the French than to the Germans—this in spite of the fact that the " School of Wisdom " which he founded at Darmstadt was " a fashion for studious and over-enthusiastic German youth " and attracted the " German intellectuals in great numbers for a certain span of years." (One gathers incidentally that the Nazis do not like Count Keyserling.) We are told also that he has read little for twenty-four years—he is now fifty-four— and that he disconcerts the literary critics because he is the " apostle of a new spiritual era." Every now and then, how- ever, there appears a critic who gauges his true worth, such as the writer " who modestly hides behind the initials W. K. G. in. the .Methodist Times," who, after .reading Keyserling's Meditations, wonders " why he ever wasted his time on ' kiddies making mud-pies like Shaw or Wills ' "(sic)" ' Huxley or even Bertrand Russell and Co.' " Keyserling, then, it is clear, is a philosopher who must be judged not by reference to the intrinsic merits of a definite theory or system which he professes, the clarity with which he presents it, the reasoned arguments with which he sustains it and defends it against objection, but as a spiritual force bringing a new message to a spiritually starved world stranded in the arid deserts of the intellect, a message which is ad- dressed to the heart rather than to the head. Now that such writers have their legitimate function few would deny. The heart has its reasons of which the head knows nothing, and we know too much today to expect that all knowledge should be susceptible of syllogistic statement or conform %to the limitations of reasoned presentation within a strictly logical framework. Spirit is real and he who embodies its message

may lead the world. Agreed ! But we need at least to know what the message is ; what, to put it crudely, the prophet is after." What, then, is Keyserling after Clear that the effect of Keyserling's message is " devasta- ting," Mrs. Parks is by no means equally clear as to its content.

It is something of a shock to find that " devastating " though he is, " it is impossible " for Keyserling " to avoid saying what has been said often and often before," while " his solu- tions cannot but have a familiar ring to us." The main con- clusions seem to be two. First, " What gives human actions

their true character and their real importance is the meaning which we put into them." Secondly, " spirit is an entity

entirely distinct from intelligence and from soul, absolutely free, conscious and responsible." These are familiar conclu- sions, although since we are told that Keyserling means by " spirit " what the Christians call " free will," and by " soul " what the literature of many centuries has known as " heart," they may not mean quite what they seem to. However, it is in general clear that Keyserling is a dualist. Besides spirit there is also in the universe a non-spiritual element. Man, in fact, is a " synthesis of spiritual and telluric," by which expression Keyserling seems to mean " naturalistic or material-

istic " elements. Indeed, we are told that 99 per cent. of the human being " is of earthly essence." Perhaps, perhaps not. So much depends on the application. For it is in the applica- tion of Keyserling's philosophy that we are bidden to look fbr a message of guidance for our distracted time. How, then, does he apply it ? At the end of the present volume there is printed as an appendix a speech which Keyserling delivered at the Congress which took place in Paris in October, 1933,

" for the future of the European Spirit." He there contrasts the methods of the spiritual guide, the repository of truth, with

those of the lion tamer who forces his subjects to obey by sheer dint of affirmation. How, then, does the spiritual guide act ? The answer to this question, which I give in Keyserli5ig's own words, may be taken as typical of his message.

" I have already said it. Not by suggestion, like the mass leader, the lion tamer, but like a model, a mould or a fruitful symbol. He does not need the slightest material power. The proper formula or image, be it that of a living being or of an eternal truth, if it is only duly meditated upon, suffices to start a process realization."

In other words, it has only to meditate sufficiently on the truths contained in Keyserling's philosophy and the world will be guided to its salvation. I wonder. C. E. M. JOA.D.