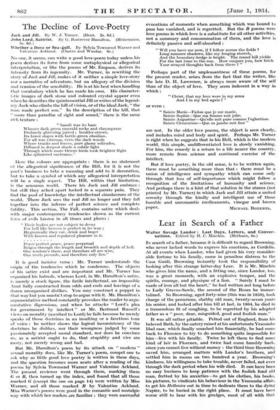 Whether a Dove or Sea-gull. By Sylvia Townsend Warner and Valentine Ackland. (Chatto and Windus. 6s.)

No one, it seems, can write a good love-poem today unless his poem derives its force from some metaphysical or allegorical interpretation, or like the poems of Mr. Empson, derives its

intensity from its ingenuity. Mr. Turner, in rewriting the story of Jack and Jill, makes of it neither a simple love-story nor a narrative of adventure, but an allegory of the division and reunion of the sensibility. He is at his best when handling that vocabulary which he has made his own. His character- istic images of dark stone and coloured crystal appear even when he describes the quintessential Jill or writes of the legend- ary Jack who climbs the hill of vision, or of the ideal Jack, " the man made perfect son." In the description of the hill, that

" more than paradise of sight and sound," there is the same rich texture :

" basalt was its base

For all was vitreous, even the dark woods Whose trunks and leaves, pure glassy solitudes, Diffused in deepest shade a subtle light Through which more Orient birds took brighter flight Like splintered sunbeams."

Here the colours are appropriate : there is no statement of the allegorical significance of the Hill, for it is not the poet's business to take a meaning and add to it decoration, but to take a symbol of which any allegorical interpretation will be a single aspect. The Hill, within that limitation, is the sensuous world. There. his Jack and Jill embrace : but still they ached apart locked in a separate pain. They find the pool of knowledge the intellectual simulacrum of the world. There Jack sees the real Jill no longer and they fall together into the inferno of perfect science and complete futility. This section, The Fall, contains satire which deals with major contemporary tendencies shown as the current form of evils known in all times and places :

" Their bodies are not subject to decay For hell like heaven is perfect in its way ; Hygienically they eat, drink and beget. With known and regulated pleasure in it.

Peace perfect peace, peace perpetual Reigns through the length and breadth and depth of hell. One wisdom's there, and therefore all are wise, One truth prevails, and therefore only lies."

It is good incisive verse : Mr. Turner understands the origin of the tendencies which he condemns. The objects of his satire exist and are important and Mr. Turner has organized his hatreds, whereas Lord, in Mr. Hamilton's satire, is merely a stock figure, the futile intellectual, an impossible Aunt Sally constructed from odds and ends and leavings of a dozen unorganized dislikes. You may construct a puppet in that way but you mustn't stop to argue with it. Mr. Hamilton's argumentative method constantly provokes the reader to argu- mentative digressions, and when he attacks " Lord's plea for government by intellect " or Mr. Bertrand Russell's views on morality (ascribed to Lord) he fails because he merely speaks of those doctrines in an insulting or a facetious tone of voice : he neither shows the logical inconsistency of the doctrines he dislikes, nor their wrongness judged by some passionately accepted moral standard, nor does he convince us, as a satirist ought to do, that stupidity and vice are

nasty, not merely wrong and bad.

But Mr. Hamilton's poem by its attack on " modern " sexual morality does, like Mr. Turner's poem, compel one to ask why so little good love poetry is written in these days, and the question becomes more acute after a reading of the poems by Sylvia Townsend Warner and Valentine Ackland. The present reviewer went through them, marking them G or B, then turned up the index, and found that all those marked G (except the one on page 14) were written by Miss Warner, and all those marked B by. Valentine Ackland. Miss Warner's poems were good in the romantic and nostalgic way with which her readers are familiar : they were successful evocations of moments when something which was bound to pass has vanished, and is regretted. But the B poems were love poems in which love is a substitute for all other activities, not a summary and consummation of them, and the love is definitely passive and self-absorbed : " Will you have me now, if I follow across the fields ? - Long summer shadows, like my longing stretch,

And the boundary-hedge is bright. The round hill yields For the last time to the sun. How conjure you, how fetch Your strayed thoughts back from there ? "

Perhaps part of the unpleasantness of these poems, for the present reader, arises from the fact that the writer, like the late D. H. Lawrence, is always more aware of the self than of the object of love. They seem indecent in a way in which :

" Christ, that my love were in my arms And I in my bed again I "

are not. In the older love poems, the object is seen clearly, and includes mind and body and spirit. Perhaps Mr. Turner is right when he suggests that in his Hell, which is the modern world, this simple, undifferentiated love is slowly vanishing. For him, the remedy is a return to a life nearer the country, more remote from science and continual exercise of the intellect.

But if love poetry, in the old sense, is to be written again, there must be something more than that : there must be a union of intelligence and sympathy which can come only through that loss of self-importance which might follow a recognition of the limitations of humanity and science. And perhaps there is a hint of that solution in the stanza (not printed by Mr. Turner) in which Jack and Jill attain a united serenity through the kindly and intelligent use of those humble and unromantic medicaments, vinegar and brown