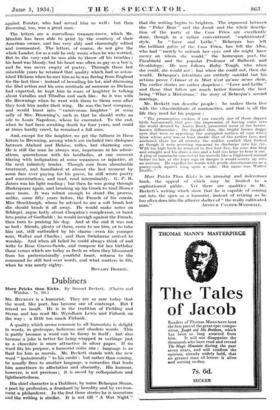 Ma. BEcKorr is a humorist. They are so rare today that 'the word, like poet; has become one or contempt. But I intend no insult. He is in the tradition of Fielding and Sterne and has read Mr. Wyndham Lewis and Firbank on the way ; a little too much Firbank.

A quality which seems common to all humorists is delight in words, in grotesque, ludicrous and obsolete words. This 'is paitly because a word can be funny in itself :" but also because a joke is better for being wrapped in verbiage just as a chocolate is more attractive in silver paper. If no word fits his purpose, a humorist coins one : language is as fluid for him as morals. Mr. Beckett stands with the new word " ipsissimosity " to his credit ; but rather than coining, he usually flees to another language, a cowardice that leads him sometimes to affectation and obscurity. His humOur, however, is not precious ; it is saved by colloquialism and lightheartedness.

His chief character is,a Dubliner, by name Belacqua Shuan, a poet by profession, .a drunkard by heredity and by environ- ment a philanderer.. In the first three stories he is immature and the writing is similar. It is not till " A Wet Night "

that the writing begins to brighten. The argument between the " Polar Bear " and the Jesuit and the whole descrip- tion of the party at the Casa Frica are excellently

done, though in a rather conventional, ' sophisticated ' style. In " Love and Lethe," Efeliequa has left the brilliant galere of the Casa Frica, has left the Alba, who had " merely to unleash her eyes and she might have mercy on whom she would," the homespun poet, the Parabimbi and the poptilaf Professor of Bullscrit and Ovoidology. He now follows Ruby Tough, who when she could, she would not ; but when she could not, then she would. Belacqua's intentions are entirely suicidal but his actions prove P Amour et la Mort n'est qu'une meme chose. The earlier stories are rather shapeless ; "Love and Lethe" and those that follow are much better formed, the best

being, "What a Misfortune," the story of Belacqua's second marriage.

Mr. Beckett can describe people ; he makes them live with the vitaesimilitude of marionettes, and that is all the life they need for his purpose :,

" The presumptive cuckoo, if not exactly one of those dapper little bureaucrats that give the impression of having come into the world dressed by Austin Reed, presented some of the better- known differentiae : the dimpled chin, the bright brown doggy eyes that were so appealing, the unrippled surface of vast white brow whose area was at least double that of the nether face, and anchored there for all eternity the sodden cowlick that looked as though it wore secreting macassar to discharge into his eye. With his high heels he attained to five foot five, his nose was long and straight and his shoes a size and a half too large to bear it out. A plug of moustache cowered at his nostrils like a frightened animal before its lair, at the least sign of danger it would scurry up into an antrum. He expelled his words with gentle discrimination as a pastry-cook squirts icing upon a cake. His name was Walter Draffin."

. More Pricks Than Kicks is an amusing and indecorous book, the appeal of which may be limited to a sophisticated public. Yet there are qualities in Mr. Beckett's writing which show that he is capable of coming out into the open as a humorist, instead of retiring as he

-too often does into the allusive shelter. of " the really cultivated