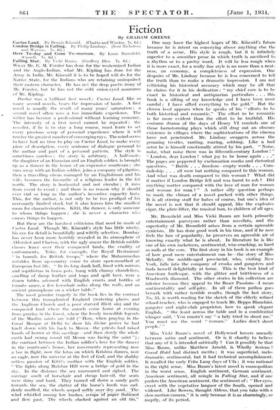 But these are the harshest criticisms that need be made of

Aldershot and Clacton. with the ugly smear the British middle w classes leave over their conquered lands, the crudity of one of his own racketeers, sentimental, wise-cracking, as hard cantonments. Take, for example, the Royal Restaurant as nails at the core. The first story in his book is an example of how good mere entertainment can be—the story of Miss in bounds for British troops," where the Muhammedan notables from up-country come to stare open-mouthed at .MehafT3', the middle-aged provincial, who, visiting New European fast life. " In its long dank hall, lined with mirrors York, falls into the company of crooks and gangsters and and aspidistras in brass pots, hung with clumsy chandeliers, finds herself delightfully at home. This is the best kind of smelling of damp leather and bugs and spilt beer, were a American burlesque, with the glitter and brittleness of a dozen tables adorned with English cruets and . bottles of Woolworth diamond. The other stories in his collection are tomato sauce, a few horsehair sofas along the walls, and an inferior because they appeal to the Baser Passions—I mean ancient gramophone on a wicker table." sentimentality and self-pity.. In all of them pathos goes The most genuine tragedy in the book lies in the contrast between this transplanted England (watering places and No. 55, is worth reading for the sketch of the elderly refined the Anglican Church and a poor starved illicit sin) and the school-teacher, who is engaged to teach Mr. Beppo Bianchini, conquered land where the camels come home at evening gangster and, night-club proprietor, how to speak elegant from grazing in the forest, where the lovely incredible legends English. ' • She leant across the table and in a confidential of the Muslim saints are told (" How, when praying in the whisper said, ' You mustn't say " a lady tried to shoot me." Great Mosque at Delhi to' show his divine power he had You must use the word " woman." Ladies don't shoot knelt down with his back to Mecca—the prieSts had raised people.' " hands of horror at this sacrilegeand then slowly the whole Miss Vicki Baum's novel of Hollywood hovers uneasily earth had swung round till Mecca was facing the saint ") ; between satire and sentiment. Or is it charity to believe the contrast between the Indian soldier's love for the dancer that any of it is intended satirically ? Can it possibly be that in the courtesan's house, her movements representing now Miss Baum, unlike Matthew Arnold, is Wholly Serious ? a bee in flight, now the lotus on which Krishna dances, now Grand hotel had distinct merits ; it was superficial, melo- an eagle, now the universe at the feet of God, and the shabby dramatic, sentimental, but it had technical accomplishment. artless passion of iiitti's mother with the English soldier. It recalled the early Fritz Lang days of Ufa; it was national " The lights along Malabar Hill were a bridge of gold in the in the right sense. Miss Baum's .latest novel is cosmopolitan sky. In the distance the sea murmured and sighed. The in the worst sense. English sentiment, German sentiment, carriage smelt of horsehair and cheap hair-oil, the seats American sentiment, all mingle in Falling Star, and if one were shiny and hard. They turned off down a sandy path prefers the American sentiment, the sentiment of : " Her eyes, towards the sea, the clatter of the horse's hoofs was sod- sweet with the vegetative languor of the South, opened and truth of a scene. His style is rough, but it is infinitely (Cassell. 7s. 6d.) superior to a smoother prose in which truth is sacrificed to

Falling Star. By Vicki Baum. (Geoffrey Bles. 7s. 6d.) a rhythm or to a pretty word. It will be less rough when

Wn.vr Mr. E. M. Forster has done for the westernized Indian it is more exact, for a really fine style is no more than a neat- and the Anglo-Indian, what Mr. Kipling has done for the ncss, an economy, a eompleteneSs of expression. One Army in India, Mr. Kincaid it is to be hoped will do for the despairs of Mr. Lindsay because he is less concerned to tell Native State, for the Indians who are retaining unimpaired the truth than to make a dramatic impression. I am not their eastern character. He has nci the deep poetic irony of criticising his historical accuracy which may be all that Mr. Forster, but he has not the cold onion-eyed assurance he claims for it in his dedication: " my chief care is to be of Mr. Kipling. exact in historical and antiquarian particulars . . . this.

entertainment purveyors rather than novelists, and the superiority of Mr. Bromfield arises from a certain agreeable knotting exactly what he is about. In literature he is like berserk with rather terrible results, though the last story, ...