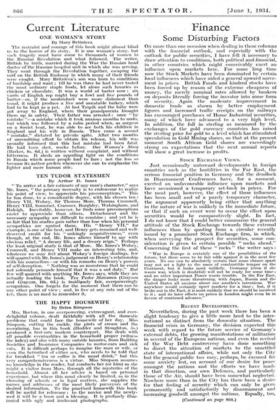 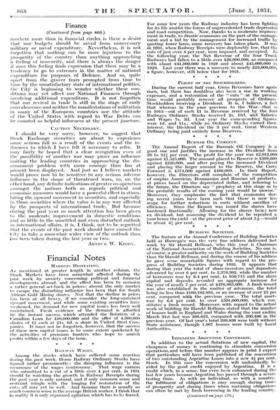 Some Disturbing- Factors more than one occasion when dealing in these columns With the financial outlook, and especially with the outlook for public securities,, I have felt it necessary to draw attention to conditions, both political and .financial, in other countries which might conceivably 'exert an influence upon markets here. For some long time now the Stock Markets have been dominated by certain local influences which have aided a general upward move- ment in prices. British Funds and kindred stocks have been forced up by reason of the . extreme cheapness of money, the merely nominal rates allowed by bankers on deposits: liter-ally forcing the investor into some- form of security. Again the moderate improvement in domestic trade as shown by better eniployment figures and increased traffic receipts on the' railways has encouraged purchases Of Home Industrial Securities, many of which have advanced to a very high level. In addition, the fall in sterling as Measured by the exchanges of the gold currency countries has raised the sterling price for gold to a level which has stimulated speculation in Gold Mining shares, so that at the present moment South African Gold shares are exceedingly strong on expectations that the next annual reports will show a great increase in profits.

Just occasionally untoward developments in foreign countries such as the hostilities in the Far East, the serious financial position in Germany and the deadlock in Disarmament Conferences have, for a moment, exerted an unfavourable influence upon markets and have occasioned a. temporary set-back in prices. For the most part, however; the effect of these influences has been small and- of -a purely temporary character, the argument apparently being either that anything in the nature of war is unlikely in the immediate future, or that if such an event were to occur the effect upon securities would be comparatively slight. In fact, I do not know that I could better summarize the general attitude of the Stock Exchange towards these external influences than by quoting from a circular recently issued by a prominent Stock Exchange firm, in which, when surveying the prospect for securities, 'some con- sideration is given to certain possible " rocks ahead." Concerning the first of these " rocks " the writer says : " War in Europe is certainly one of the possibilities of the future, but there seem to be fair odds against it in the next few years. No one can be absolutely certain that some chance spark may not set a light to the mass of combustible temper on the Continent, but it looks most unlikely. Germany (even if she wants war, which is doubtful) will not be ready for some time ; and no other important Power wants trouble. In the Far East, the danger looks more threatening, with Japan, Russia and the United States all anxious about one another's intentions. War anywhere would certainly upset markets for a time ; but, if it broke out in the East, it is most unlikely that we should be involved in it ; and its later effects on prices in London might even be in favour of continued advance."

Nevertheless, during the past week there has been a slight tendency to give a little more heed to the inter- national as distinct from the domestic situation. The financial crisis in Germany, the decision expected this week with regard to the future service of Germany's external debts, the growing manifestations of militarism in several of the European nations, and even the revival of the War Debt controversy have done something to direct the attention of markets to the unsettled state of international affairs, while not only the City but the general public too may, perhaps, be excused for some anxiety lest, on account of our desire for peace amongst the nations and the efforts we have made in that direction, our own Defences, and particularly those of the Air, should have been somewhat neglected. Nowhere more than in the City has there been a desire for that feeling of security which can only be given permanently and satisfactorily by disarmament and increasing goodwill amongst the nations. Equally, too, (Continued on page 868.) Finance (Continued from page 866.) nowhere more than in financial circles is there a desire that our budgets should be saved from unnecessary military or naval expenditure. Nevertheless, it is not forgotten that nothing can be .more injurious to the prosperity of the country_ than anything approaching a feeling of insecurity, and there is always the danger if once this feeling finds expression that there may be a tendency to go to extremes in .the. matter of national- expenditure for purposes of Defence. And so, - quite apart from the graver fears prompted from time to time by the unsatisfactory state of international politics, the City is beginning to wonder whether these con-' ditions may yet affect our National Finances through involving additional expenditure. It is not forgotten that our revival in trade is still in-the stage of early convalescence and neither the manifestations of militarism in many of the European countries nor the attitude of the United States with 'regard to War Debts can be counted as helpful influences at the present juncture.

I should be very sorry, however, to suggest that Stock Exchange securities are .about to experience some serious fall as a result of the events and the in- IlueneeS to which I have felt it necessary to refer. It may fairly be hoped that a clear recognition even of the possibility of another war may :prove an influence uniting the leading countries in approaching the dis- armatheht problem with more courage than has at present been displayed. And just as I believe markets would prove now to be sensitive to any serious adverse influence in the shape of threatened wars, so, on the other hand, any definite indications of greater co-operation amongst the nations both as regards political and economic measures would have a powerful effect in stimu- lating the upward movement-in securities, and especially in those securities where -the value is in any way affected by the proipeets of international trade. But because during the past year so much attention .has been given to the moderate, improvement in domestic conditions and so little to the unsettled and even disturbed outlook in international affairs, it is, I think; not to be regretted that the events of the past .week should have caused the City to take a somewhat wider view of the outlook than has been' taken during the last year or two.. „ 'ARTHUR . KIDDY.