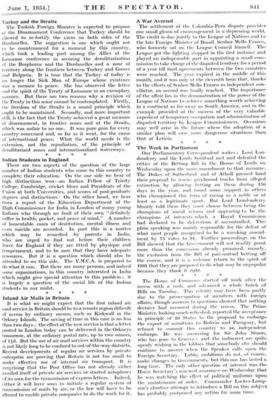 Page 3, 1 June 1934 — The House of Commons started off work after the recess
Close

The House of Commons started off work after the recess

with a rush, and advanced a whole batch of Bills on Tuesday. This celerity may have been partly due to the preoccupation of members with foreign affairs, though answers to questions showed that nothing decisive had occurred during the recess. The Prime Minister, looking much refreshed, reported the acceptance in principle of 20 States to the proposal to embargo the export of munitions to Bolivia and Paraguay, but refused to commit this country to an independent embargo. He was answering for Sir John Simon, who has gone to Geneva ; and the indiscreet are quite openly wishing in the lobbies that somebody else should continue to answer when the Speaker calls upon the Foreign Secretary. Lobby ambitions do not, of course, make changes in Governments, but this one has lasted u long time. The only other question of interest was the Home Secretary's renewed assurance on Wednesday that he was watching the effect of political uniforms upon the maintenance of order. Commander Locker-Lamp- son's abortive attempt to introduce a Bill on this subject, has probably postponed any action for some time.