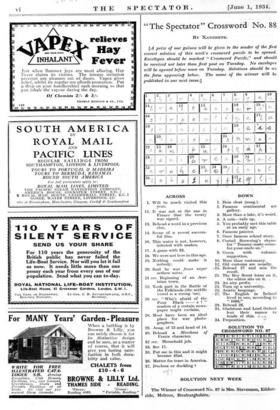 "The Spectator" Crossword No. 88

[A prize of one guinea will be given to the sender of the first correct solution of this week's crossword puzzle .to be opened. Envelopes should be marked " Crosszvord Puzzle," and should be received not later than first post on Tuesday. No envelopes will be opened before noon on Tuesday. Solutions should be on the form appearing below. The name of the winner will be published in our next issue.]

1. Will be much visited this year.

11. It was not at the one in France that the treaty was signed.

13. Behead a word in a previous clue.

18. This water is not, however, infested with snakes.

19. Nothing could make it nobody.

22. Took part in the Battle of the Falklands (the middle vowel is a wrong 'un).

28. Must have been an ideal place for war photo- graphers.

30. Behead a Merchant of Venice character.

35. Put me in this and it might become filial.

36. Matter for tears in America.

5. You probably met this table at an early age.'

31. Gladstone and Lord Oxford lent their names to kinds of this. L aQ