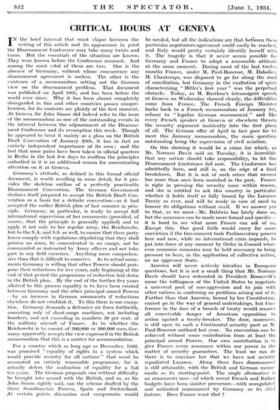 IN the brief interval that must elapse between the writing of this article and its appearance in print the Disarmament Conference may take many twists and turns. But the essentials of the situation are known. They were known before the Conference resumed. And among the most vital of them are two. One is the absence of Germany, without whose concurrence any disarmament agreement is useless. The other is the existence of a memorandum setting out the German view on the disarmament problem. That document was published on April 16th, and has been before the world ever since. Why it has been almost completely disregarded in this and other countries passes compre- hension, for its contents are plainly of the first moment. At Geneva Sir John Simon did indeed refer to the issue of the memorandum as one of the outstanding events in the interval between the adjournment of the Disarma- ment Conference and its resumption this week. Though he appeared to treat it mainly as a gloss on the British Draft Convention of January 20th, it has in fact an entirely independent importance of its own ; and the fact that some pains have been taken in official quarters in Berlin in the last few days to reaffirm the principles embodied in it is an additional reason for concentrating attention on it at Geneva.

Germany's attitude, as defined in this formal official document, is worth recalling in some detail, for it pro- vides the skeleton outline of a perfectly practicable Disarmament Convention. The German Government declares itself prepared to accept the British Draft Con- vention as a basis for a definite convention—as it had accepted the earlier British plan of last summer in prin- ciple. Germany, in particular, is ready to accept full international supervision of her armaments (provided, of course, that the principle is generally applied) and to apply it not only to her regular army, the Reichswehr, but to the S.A. and S.S. as well, to ensure that these party forces comply with regulatiOns stipulating that they shall possess no arms, be concentrated in no camps, not be commanded or instructed by Army officers and not take part in any field exercises. Anything more comprehen- sive than that is difficult to conceive. As to actual arma- ments Germany is willing that other Powers should post- pone their reductions for five years, only beginning at the end of that period the programme of reduction laid down in the British plan. By the end of the further five years allotted to this process equality is to have been created between Germany and the other principal armed Powers —by an increase in German armaments if reductions elsewhere do not establish it. To this there is one excep- tion. Germany demands a defensive air force forthwith, consisting only of short-range . machines, not including bombers, and not exceeding in numbers 50 per cent. of the military aircraft of France. As to whether the Reichswehr is to consist of 200,000 or 300,000 men, Ger- many apparently .aceepts the view expressed in the British memorandum that this is a matter for accommodation.

For a country which as long ago as December, 1932, was promised " equality of rights in a system which would provide security for all nations " that must be accounted an entirely reasonable programme, for it actually defers the realization of equality for a full ten years. The German proposals can without difficulty be brought into accord with can British, and so, as Sir John Simon rightly said, can the scheme drafted by the three Scandinavian Powers, Spain and Switzerland. At certain points discussion and compromise would be needed, but all the indications are that beareen these particular negotiators agreement could easily be reached, and Italy would pretty certainly identify herself with it. The tragedy is that it never seems possible for Germany and France to adopt a reasonable attitude at the same moment. During most of the last twelve months France, under M. Paul-Boncour, M. Daladier, M. Chautemps, was disposed to go far aking the road of conciliation, but Germany in. the exaltation of spirit characterizing " Hitler's first year " was the perpetual obstacle. Today, as M. Barthou's intransigent speech at Geneva on Wednesday showed clearly, the difficulties come from France. The French Foreign Minister harks back to a French memorandum of January 1st, refuses to " legalize German rearmament " and like every French speaker at Geneva or elsewhere thrusts the security argument insistently into the first place of all. The German offer of April in fact goes far to Meet this January memorandum, the main question outstanding being the supervision of civil aviation.

On this showing it would be a crime for which, as Mr. Norman Davis said on Tuesday, it is incredible that any nation should take responsibility, to let the Disarmament Conference fail now. The Conference has admittedly been, and still is, on the edge of a final breakdown. But it is out of such crises that success has more than once been snatched in the past. France is right in pressing the security issue within reason, and she is entitled to ask this country in particular whether it holds itself as fully bound by the Locarno Treaty as ever, and will be ready in case of. need to honour its obligations without cavil. If we answer yes to that, as we must—Mr. Baldwin has lately done so, but the assurance can be made more formal and specific— it is hard to see what more France can ask of us. Except this. Our good faith would carry far more conviction if the Government took Parliamentary powers here and now, while no international crisis impends, to put into force at any moment by Order in Council what- ever economic measures may be held necessary to bring pressure to bear, in the application of collective action, on an aggressor State.

America will never actively interfere. in European questions, but it is not a small thing that Mr. Norman Davis should have reiterated in President Roosevelt's name -the willingness of the United States to negotiate a universal pact of non-aggression and to . join with other nations in conferring on problems arising out of it. Further than that America, bound by her Constitution, cannot go .in the way of general undertakings, but Con- ference in the face of a breach of treaty would remove all conceivable danger of American opposition to action against a treaty-breaker. The door, moreover, is still open to such • a Continental security pact as M. Paul-Boncour outlined last year. No convention can be achieved without some contribution from at least the principal armed Powers. Our own contribution is to -give France every assurance within our power in the matter of security guarantees. The least we can do there is to convince her that we have not secretly repudiated Locarno. Along those lines disarmament is still attainable, with the British and German memo- randa as its starting-point. The single alternative is an armaments race—of which recent French and Italian budgets have been sinister precursors—with unregulated and unlimited rearmament by Germany as its chief feature. Does France want that ? .