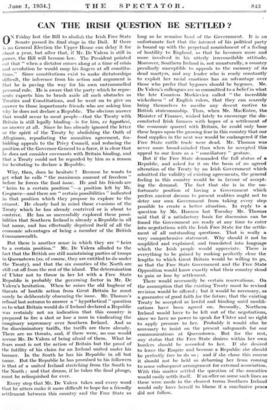 CAN THE IRISH QUESTION BE SETTLED ?

ON Friday last the Bill to abolish the Irish Free State Senate passed its final stage in the Dail. If there is no General Election the Upper House cari delay it for about a year, but after that, if Mr. De Valera is still in power, the Bill will become law. The President pointed out that " when a dictator comes along at a time of crisis and revolution he would snap his fingers at all Constitu- tions." Since constitutions exist to make dictatorships difficult, the inference from his action and argument is that he is paving the way for his own untrammelled personal rule. He is aware that the party which he repre- sents expects him to brush aside all such obstacles as Treaties and Constitutions, and he went on to give an answer to those importunate friends who are asking him why he does not declare a Republic. The obvious answer that would occur to most people—that the Treaty with Britain is still legally binding—is for him, ex hypothesi, no answer at all. Since he has already ignored the letter or the spirit of the Treaty by abolishing the Oath of Allegiance, repudiating the annuities agreement, for- bidding appeals to the Privy Council, and reducing the position of the Governor-General to a farce, it is clear 'that he does not consider covenants with Britain binding, and that a Treaty could not be regarded by him as a reason for heSitating to declare a Republic.

Why, then, does he hesitate ? Because he wants to get what he calls " the maximum amount of freedom " before be forces the final issue. He and his friends are "heirs to a certain position "—a position left by Mr. Cosgrave—and there are " certain possibilities " indicated in that position which they propose to explore to the utmost. He clearly had in mind those evasions of the Treaty which he has already contrived or is about to contrive. He has so successfully explored these possi- bilities that Southern Ireland is already a Republic in all but name, and has effectually deprived itself of all the economic advantages of being a member of the British Commonwealth.

But there is another sense in which they are " heirs to a certain position." Mr. De Valera alluded to the fact that the British are still maintaining parties of troops in Queenstown (as, of course, they are entitled to do under the Treaty), and that the six counties of the North are still cut off from the rest of the island. The determination of Ulster not to throw in her lot with a Free State Republic is probably the governing . factor in Mr. De Valera's hesitation. When he raises the old bugbear of threats of hostile action from Great Britain he must surely be deliberately obscuring the issue. Mr. Thomas's refusal last autumn to answer a " hypothetical " question as to what Britain would do if Ireland declared a Republic was certainly not an indication that this country is prepared to fire a shot or lose a man in vindicating the imaginary supremacy over Southern Ireland. And as for -discriminatory tariffs, the tariffs are there already. There are no threats, and, if there were, no one would accuse Mr. De Valera of being afraid of them. What he fears most is not the action of Britain but the proof of the futility of his claim for an Ireland united under his banner. • In the South he has his Republic in all but name. But the Republic he has promised to his followers is that of a united Ireland stretching from the South to the North ; and that dream, if he takes the final plunge, must be relinquished for ever..

Every step that Mr. De Valera takes and every word that he utters make it more difficult to hope for a friendly settlement between this country and the Free State so long as he remains head of the Government. It is an unfortunate fact that the interest of his political party is bound up with the perpetual nourishment of a feeling of hostility to England, so that he becomes more and more involved in his utterly irreconcilable attitude. Moreover, Southern Ireland is, not unnaturally, a country peculiarly susceptible to appeals to the memory of its dead martyrs, and any leader who is ready constantly to exploit her racial emotions has an advantage over those who prefer that bygones should be bygones. Mr. De Valera's colleagues are so committed to a belief in what the late Countess Markievicz called " the incredible wickedneis " of English rulers, that they can scarcely bring themselves to ascribe any decent motive to British statesmanship. Thus, when Mr. MacEntee, the Minister of Finance, wished lately to encourage the dis- comforted Irish farmers with hopes of a settlement of the economic quarrel with Britain, he could only base these hopes upon the growing fear in this country that our food supplies in the next war would be endangered if the Free State cattle trade were dead. Mr. Thomas was never more broad-minded than when he accepted this appeal to our fears as a " conciliatory " gesture.

But if the Free State demanded the full status of a Republic, and asked for it on the basis of an agreed alteration of the Treaty by an Irish Government which admitted the validity of existing agreements, the general feeling in this country would be in favour of accept- ing the demand. The fact that she is in the un- fortunate position of having a Government which prefers ancient dreams to present realities ought not to deter our own Government from taking every step possible to create a better situation. In reply to a question by Mr. Hannon last Tuesday Mr. Thomas said that if a satisfactory basis for discussion can be found the Government are ready at any time to enter into negotiations with the Irish Free State for the settle- ment of all outstanding questions. That is really a very comprehensive statement. Why should it not be amplified and explained, and translated into language which the Irish people would appreciate. There is everything to be gained by making perfectly clear the lengths to which Great Britain would be willing to go, So that the Free State Government and the Free State Opposition would know exactly what their country stood to gain or lose by settlement.

There would necessarily be certain reservations. On the assumption that the existing Treaty must be revised revision would be offered ; but it would be necessary, as a guarantee of good faith for the future, that the existing Treaty be accepted as lawful and binding until modifi- cations have been agreed on. Secondly, Northern. Ireland would have to be left out of the negotiations, since we have no power to speak for Ulster and no right to apply pressure to her. Probably it would also be necessary to insist on the present safeguards for our communications at Queenstown. But for the rest, any status that the Free State desires within her own borders should be accorded to her. If she desired to leave the Empire and become a Republic she should be perfectly free to do so ; and if she chose this course it should not be held as debarring her from coming to some subsequent arrangement for external association. With this matter settled the question of the. annuities would easily settle itself. If an offer on some such lines as these were made in the clearest terms Southern Ireland would only have herself to blame if a conclusive peace did not follow.