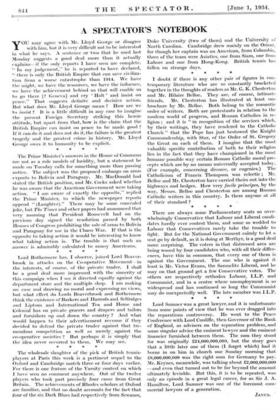 Page 6, 1 June 1934 — There are always some Parliamentary seats so over- whehningly Conservative
Close

There are always some Parliamentary seats so over- whehningly Conservative

that Labour and Liberal candi- dates hardly ever contest *them, and some so wedded to Labour that Conservatives rarely take the trouble to fight. But for the National Government calmly to let a seat go by default, as it is doing at Merthyr, is a good deal more surprising. The voters in that distressed area are being wooed by four candidates who, with all their differ- ences, have this in common, that every one of them is against the Government. The one who is against it least is Mr. Victor Evans, the Samuelite Liberal, and he may on that ground get a few Conservative votes. The others are respectively orthodox Labour, I.L.P. and Communist, and in a centre where unemployment is so widespread and has continued so long the Communist may do unexpectedly well. The late member was I.L.P.