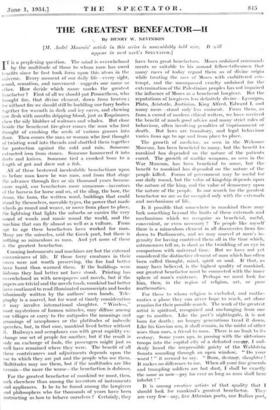 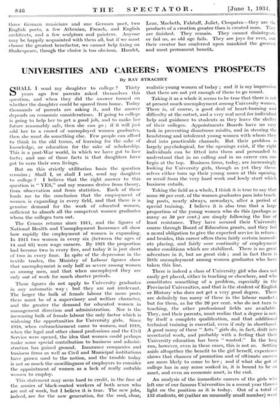 [it. Andre Maurois' article in this series is unavoidably held over. It will appear in next week's SPECTATOR.] IT is a perplexing question. The mind is overwhelmed by the multitude of those to whom man has owed benefits since he first took form upon this atom in the universe. Every moment of our daily life—every sight, sound, sensation, and movement—suggests one name or other. How decide which name marks the greatest benefactor ? First of all we should put Pronietheus, who brought fire, that divine element, clown from heaven ; for without fire we should still be huddling our furry bodies together for warmth in dark and icy caves, and chewing raw flesh with mouths dripping blood, just as Esquimaux chew the oily blubber of walruses and whales. But close beside' the beneficent fire-giver comes the man who first thought of crushing the seeds of various grasses into flour. Then conies the man or woman who first thought of twisting wool into threads and shuttled them together for protection against the cold and rain. Someone extracted iron from stones. Someone hammered it into darts and knives. Someone tied a crooked bone to a length of gut and drew out a fish.

All of these bestowed incalculable benefactions upon us before man knew he was man, and from that stage the advance through five or six thousand years became more rapid, our .benefactors more numerous—inventors of the harness_ for horse and ox, of the srmg, the bow, the drum, the horn, the written word, buildings that could stand by themselves, movable types, the power that made wheels go round and weave, or move from place to place, the lightning that lights the suburbs or carries the very sound of words and music round the world, and the machine that can fly almost as well as a vulture. From age to age these benefactors have worked for man. Many are the miracles, said the Greek poet, but there is nothing so miraculous as man. And yet none of these is the greatest benefactor.

Cunning instruments and machines are but the external conveniences of life. If those furry creatures in their caves were not worth preserving, the fire had better have burnt than warmed them. If the' buildings were hideous they had better not have stood. Printing has overwhelmed us with newspapers and novels, but if the papers are trivial and the novels trash, mankind had better have continued to read illuminated manuscripts and books laboriously written by the authors' own hands. Tele- graphy is a marvel, but for want of timely consideration it may involve international.. slaughter. " Wireless," most mysterious of .human miracles, may diffuse among our villages or carry to the antipodes the moanings and groanings of saxophones or the platitudes of imbecile speeches, but, in that case, mankind lived better without it. Railways and aeroplanes can with great rapidity ex- change one set of people for another, but if the result is only an exchange of fools, the passengers might just as well have remained where they were. The benefit of all these contrivances and adjustments depends upon the use to which they are put and the people who use them. Multitudes may use them, but if the multitudes are like vermin—the more the worse—the benefaction is dubious.

For the greatest benefactor of mankind we must, then, seek elsewhere than among the inventors of instruments and appliances. Is he to be found among the lawgivers and philosophers who for thousands of years have been instructing us how to behave ourselves ? Certainly, they have been great benefactors. Moses ordained command- ments so suitable to his nomad fellow-tribesmen that many races of today regard them as of divine origin while treating the race of Moses with embittered cdp.- tempt, and the unsurpassed cruelty ordained for the extermination of the Palestinian peoples has not impaired the influence of Moses as a beneficent lawgiver. But the reputations of lawgivers less definitely divine—Lycurgus, Plato, Aristotle, Justinian, King Alfred, Edward I, and many more—stand only less eminent. From them, as from a crowd of modern ethical writers, we have received the benefit of much good advice and many strict rules of behaviour, often involving penalties of imprisonment or death. But laws are transitory, and legal behaviour varies from age to age and from place to place.

Is it possible that somewhere in mankind there may lurk something beyond the limits of these externals and mechanisms which we recognize as beneficial, useful, convenient, or even necessary ? To people like myself there is a miraculous element in all discoveries from fire down to Parliaments, and we may marvel at man's in- genuity for having contrived them all in the time which, astronomers tell us, is short as the twinkling of an eye in comparison with universal time. But we have not yet considered the distinctive clement of man which has often been called thought; mind, spirit or soul. If that, as many have believed, is the highest quality of mankind,. our greatest benefactor must be connected with the inner sphere of man's existence. Perhaps we must look for him, then; in the region of religion, art, or pure. mathematics.

For those to whom religion is excluded, and mathe- matics a plane they can never hope to reach, art alone remains for their possible search. The work of the greatest artist is spiritual, recognized and unchanging from one age to another. Like the poet's nightingale, it is not born for death ; no hungry generations tread it down. Like his Grecian urn, it shall remain, in the midst of other woes than ours, a friend to man. There is no limit to its ecstasy. Some years ago, in passing with the victorious troops into the capital city of a defeated enemy, I sud- denly heard the irrepressible gaiety of the Waldstein Sonata sounding through an open window. " Do your -worst ! " it seemed to say. " Burn, destroy, slaughter ! It makes no difference to me. When all your fine generals and trampling soldiers are but dust, I shall be exactly the same as now—gay for ever as long as man shall here inhabit ! "

It is among creative artists of that quality that I should look for mankind's greatest benefactor. They arc very few—say, five Athenian poets, one Italian poet, three German musicians and one German poet, two English poets, a few Athenian, French, - and English architects, and a few sculptors and painters. Anyone may be happily acquainted with them all, but if we must choose the greatest benefactor, we cannot help fixing on Shakespeare, though the choice is too obvious. Hamlet, Lear, Macbeth, Falstaff, Juliet, Cleopatra—they are the products of a creation greater than is created man. They are finished. ' They remain. They cannot disintegrate or fail us, as old age fails. They are joys for ever, and their creator has conferred upon mankind the greatest and most permanent benefit,