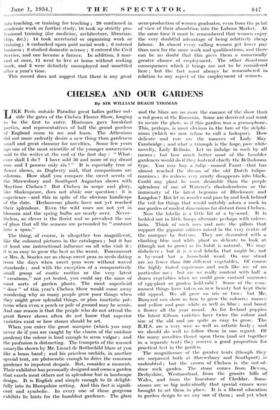 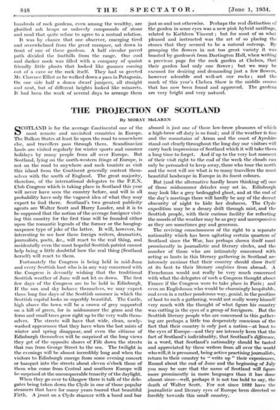 CHELSEA AND OUR GARDENS

LIKE Penis outside Paradise great ladies gather out- side the gates of the Chelsea Flower Show, longing to be the first to enter. Hostesses gave breakfast parties, and representatives of half the grand gardens of England come to see and learn. The Athenians did not more ardently desire a new thing than gardeners small and great clamour for novelties. Some few years ago one of the most scientific of the younger nurserymen said to the writer at the end of the first day : " What- ever shall I do ? I have sold 50 and more of my dwarf rose and I possess only six ! " It is especially true of flower shows, as Dogberry said, that comparisons are odorous. How shall you compare the sweet scents of the Shrewsbury and Southport Augustan shows with 3faytime Chelsea ? But Chelsea in scope and glory, like Shakespeare, does not abide our question : it is experience—and this in spite of the obvious handicaps of the date. Herbaceous plants have not yet reached their splendour. Even the wild roses are not yet in blossom and the spring bulbs are nearly over. Never- theless, so clever is the florist and so prevalent the use of glass that all the seasons arc persuaded to " contract into a span."

The thing, of course, is altogether too magnificent, like the coloured pictures in the catalogues ; but it has at least one instructional influence on all who visit it : it is as easy to grow the best as the worst. Powerscourt or Mrs. A. Searles are as cheap sweet peas as seeds dating from the days when sweet peas were without waved standards ; and with the exception of a comparatively small group of exotic rarities or the very latest " creations," not yet tested, you could say the same of most sorts of garden plants. The most superficial " doer " of this year's Chelsea Show would come away wondering why so many people grow poor things when they might grow splendid things, or plan inartistic pat- terns when even a perch or pole of ground may be scenic. And one reason is that the people who do not attend the great flower shows often do not know that superior varieties exist or how stones should be set.

When you enter the great marquee (which you may never do if you are caught by the charm of the outdoor gardens) the colour is loud enough to seem vulgar ; and the profusion is distracting. The trumpets of the massed amaryllis shown by Mr. Lionel de Rothschild blare at you like a brass band ; and his priceless orchids, in another special tent, are plutocratic enough. to drive the common gardener to impotent despair. But, consider a moment. Their exhibitor has personally designed and owns a garden that excels most others not in splendour but in landscape design. It is English and simple enough to fit delight- fully into its Hampshire setting. And this fact is signifi- cant and symbolic. In every one of these gorgeous exhibits lie hints for the humblest gardener. The glare and the blare arc no more the essence of the show than a red gown at the Encaenia. Some are deceived and want to secure the glare, as if this garden was a gramophone. This, perhaps, is most obvious in the lure of the delphi- nium (which we now refuse to call a larkspur). How delicate and rare are the mauves of Lady May Cambridge ; and what a triumph is the huge, pure white novelty, Lady Belinda. Let us indulge in such by all means ; but how much better most of the humbler gardeners would do if they fostered chiefly the Belladonna type. You may buy a tulip—named Faust—that has almost reached the dream of the old Dutch tulipo- maniacs : its redness very nearly disappears into black. Could any plant be more desirable than the purple splendour of one of Waterer's rhododendrons or the immensity of the latest begonias of Blackmorc and Langdon? But let us wonder and pass by and look behind the veil for things that would suitably adorn a nook in our garden of modest dimensions far distant from Chelsea.

Now the lobelia is a little bit of a by-word. It is bedded out in little lumps alternate perhaps with calcco- laria. Think of such uses and note the pillars that support the gigantic edifices raised in the very centre of the marquee by Suttons. They are decorated with a climbing blue and white plant as delicate to look at (though not to grow) as its habit is natural. We may disbelieve ; but it is a real lobelia that might be, not a by-word but a household word. On one stand are no fewer than 300 different vegetables. Of course the highly tinted capsicums and such like arc of no particular use ; but are we really content with half a dozen vegetables when we could grow custard marrows of egg-plant or garden kohl-rabi ? Some of the com- monest things have taken on new beauty but kept their old appeal. We all grow an iris or two : but Mr. Bunyard can show us how to grow the colours; mauve and yellow and pure white as well as blue ; and boast a flower all the year round. As for Iceland poppies the latest Gibson varieties have twice the colour and size of the old and arc quite as easy to grow. The R.H.S. are a very wise as well as artistic body ; and we should do well to follow them in one regard. Of the many novelties thrust upon them (and set together in a separate tent) they reserve a good proportion for practical test in the garden. The magnificence of the greater tents (though they are surpassed both at Shrewsbury and Southport) is undoubted ; but the crown of Chelsea is the out-of- door rock garden. The stone comes from Devon, Derbyshire, Westmorland, from the granite hills of Wales, and from the limestone of Cheddar. Some stones are so big individually that special cranes were brought to set them in place. It is a liberal education in garden design to see any one of them ; and yet what hundreds of rock gardens, even among the wealthy, are glorified ash heaps or unlovely compounds of stone and mud that quite refuse to agree to a mutual relation.

It was by chance that one observer, emerging tired and overwhelmed from the great marquee, sat. down in front of one of these gardens. A half circular paved path divided the foothills from the range. One cool and darker nook was filled with a company of quaint friendly little plants that looked like gnomes coming out of a cave or the rock itself. They had so greeted Mr. Clarence Elliot as he walked down a pass in Patagonia. - On one side half a dozen dwarf junipers, all straight and neat, but of different heights looked like minarets. It had been the work of several days to arrange them just so and not otherwise. Perhaps the real distinction of the garden in some eyes was a new pink hybrid saxifrage, related to Kathleen Vincent ; but for most of us what pleased and instructed was the art of so placing the stones that they seemed to be a natural outcrop. By grouping the flowers in not too great variety it was boasted by gardener% from Dartington Hall, when writing a previous page for the rock garden at Chelsea; that their garden had only one flower y but we may be excused for desiring and demanding just a few flowers, however adorable and well-set our rocks ; and the mark of this year's Chelsea Show is the middle course that has now been found and approved. The gardens are very bright and very natural.