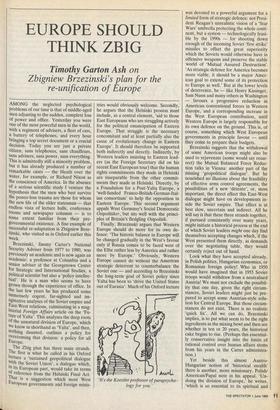 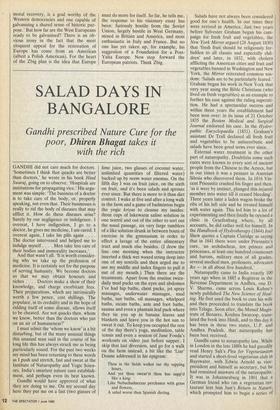 Zbigniew Brzezinski's plan for the re-unification of Europe

AMONG the neglected psychological problems of our time is that of middle-aged men adjusting to the sudden, complete loss of power and office. Yesterday you were one of the most powerful men in the world, with a regiment of advisers, a fleet of cars, a battery of telephones, and every hour bringing a top secret document or a crucial decision. Today you are just a private citizen, sans telephones, sans chauffeurs, sans advisers, sans power, sans everything. This is admittedly still a minority problem, but it has already produced a number of remarkable cases — the Heath over the water, for example, or Richard Nixon as the conscience of America. In the absence of a serious scientific study I venture the hypothesis that the men who best survive the power-loss trauma are those for whom the new life of the elder statesman — that endless vista of lecture halls, conference rooms and newspaper columns — is to some extent familiar from their pre- governmental existence. A fine example of successful re-adaptation is Zbigniew Brze- zinski, who visited us in Oxford earlier this week.

Brzezinski, Jimmy Carter's National Security Adviser from 1977 to 1980, was previously an academic and is now again an academic: a professor at Columbia and a senior adviser at the Georgetown Center for Strategic and International Studies, a Political scientist but also a 'policy intellec- tual'. He is a man who seems to have grown through the experience of office. In the last few years he has produced some immensely cogent, far-sighted and im- aginative analyses of the Soviet empire and East-West relations, culminating in a mag- isterial Foreign Affairs article on the 'Fu- ture of Yalta'. This analyses the deep roots of the unnatural division of Europe, which we know in shorthand as 'Yalta', and then, nothing daunted, outlines a policy for overcoming that division: a policy for all Europe.

The Zbig plan has three main strands. The first is what he called in his Oxford lecture a 'sustained geopolitical dialogue With the Soviet Union', a dialogue which, in Its European part, would take its terms of reference from the Helsinki Final Act. That is a suggestion which most West European governments and foreign minis- tries would obviously welcome. Secondly, he argues that the Helsinki process must include, as a central element, 'aid to those East Europeans who are struggling actively for the political emancipation of Eastern Europe. That struggle is the necessary concomitant and at least partially also the cause of evolutionary change in Eastern Europe'. It should therefore be supported both indirectly and directly. Indirectly, by Western leaders insisting to Eastern lead- ers (as the Foreign Secretary did on his recent East European tour) that the human rights commitments they made in Helsinki are inseparable from the other commit- ments they made in Helsinki. Directly, by a Foundation for a Post-Yalta Europe, a 'well-funded Franco-British-German-Ital- ian consortium' to help the opposition in Eastern Europe. This second argument appals West Germany's Social Democratic Ostpolitiker,, but sits well with the princi- ples of Britain's fledgling Ostpolitik.

Finally, Brzezinski argues that Western Europe should do more for its own de- fence: 'The historic balance in Europe will be changed gradually in the West's favour only if Russia comes to be faced west of the Elbe rather less by America and rather more by Europe.' Obviously, Western Europe cannot do without the American strategic deterrent to counterbalance the Soviet one — and according to Brzezinski the long-term goal of Soviet policy since Yalta has been to 'drive the United States out of Eurasia'. Much of his Oxford lecture 's the Koestler professor of parapsycho- logy for you.' was devoted to a powerful argument for a limited form of strategic defence: not Presi- dent Reagan's unrealistic vision of a 'Star Wars' umbrella protecting the whole conti- nent, but a system — technologically feasi- ble by the 1990s — for shooting down enough of the incoming Soviet 'first strike' missiles to offset the great superiority which the Soviets would otherwise have in offensive weapons and preserve the stable world of 'Mutual Assured Destruction'. 'As strategic defence for America becomes more viable, it should be a major Amer- ican goal to extend some of its protection to Europe as well.' But at the lower levels of deterrence, he — like Henry Kissinger, Sam Nunn and many others in Washington favours a progressive reduction in American conventional forces in Western Europe, and a corresponding increase in the West European contribution, until Western Europe is largely responsible for its own defence on the ground. This is, of course, something which West European governments in principle favour — until they come to prepare their budgets.

Brzezinski suggests that the withdrawal of some American troops might also be used to rejuvenate (some would say resur- rect) the Mutual Balanced Force Reduc- tion talks in Vienna: another part of the missing 'geopolitical dialogue'. But he nourished no illusions about the feasibility of effective arms control agreements, the possibilities of a new 'détente', or, most important, the direct effect this East-West dialogue might have on developments in- side the Soviet empire. That effect is at best slow, uncertain and indirect. All he will say is that these three strands together, if pursued consistently over many years, might initiate a historical process at the end of which Soviet leaders might one day find themselves accepting changes which, if the West presented them directly, as demands over the negotiating table, they would certainly reject out of hand.

Look what they have accepted already, in Polish politics, Hungarian economics, or Romanian foreign policy!. Who in 1950 would have imagined that in 1955 Soviet troops would withdraw from a neutralised Austria! We must not exclude the possibil- ity that one day, given the right circum- stances, Soviet leaders might just be pre- pared to accept some Austrian-style solu- tion for Central Europe. But those circum- stances do not exist. There is no realistic 'quick fix'. All we can do, Brzezinski implies, is to put what seem to be the right ingredients in the mixing bowl and then see whether in ten or 20 years, the historical cake begins to rise. (Perhaps this essential- ly conservative insight into the limits of rational control over human affairs stems from his years in the Carter administra- tion.) Yet beside this almost Austro- Hungarian 'notion of 'historical stealth' there is another, more missionary, Polish/ American/Papal note in his appeal. 'Un- doing the division of Europe,' he writes, 'which is so essential, to its spiritual and

moral recovery, is a goal worthy of the Western democracies and one capable of galvanising a shared sense of historic pur- pose.' But how far are the West Europeans ready to be galvanised? There is an ob- vious irony in the fact that the most eloquent appeal for the restoration of Europe has come from an American (albeit a Polish American). For the heart of the Zbig plan is the idea that Europe must do more for itself. So far, he tells me, the response to his visionary essay has been: furiously hostile from the Soviet Union, largely hostile in West Germany, mixed in Britain and America, and most enthusiastic in Italy and France. But no one has yet taken up, for example, his suggestion of a Foundation for a Post- Yalta Europe. Now step forward the European patriots. Think Zbig.