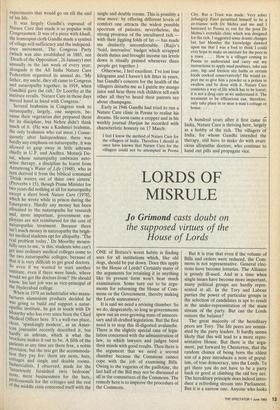 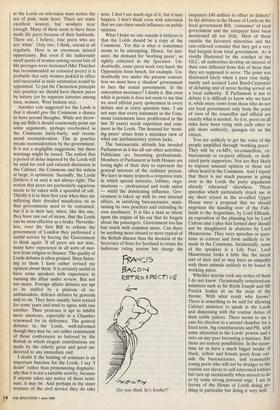 the supposed virtues of the House of Lords

ONE of Britain's worst habits is finding uses for all institutions which, like old dogs, should be put down. Does this apply to the House of Lords? Certainly many of the arguments for retaining it in anything like its present form won't bear much examination. Some turn out to be argu- ments for reforming the House of Com- mons or the Government, thereby making the Lords unnecessary.

It is said we need a revising chamber. So we do, desperately, so long as governments spew out an ever-growing mass of unneces- sary and ill-drafted legislation. But the first need is to stop this ill-digested avalanche. There is the slightly special case of legis- lation concerned with the administration of law, to which lawyers and judges bend their minds with good results. Then there is the argument that we need a second chamber because the Commons cannot cope with the job of examining Bills. Owing to the vagaries of the guillotine, the last half of the Bill may not be discussed at all in the committees of the Commons. The remedy here is to improve the procedure of the Commons. But it is true that even if the volume of Bills and orders were reduced, the Com- mons is not representative. General elec- tions have become lotteries. The Alliance is grossly ill-used. And at a time when single issues have become more important, many political groups are hardly repre- sented at all. In the Tory and Labour parties the power of particular groups in the selection of candidates is apt to result in the under-representation of the main stream of the party. But can the Lords restore the balance?

The great majority of the hereditary peers are Tory. The life peers are nomin- ated by the party leaders. It hardly seems likely that this will lead to a more repre- sentative House. But there is the argu- ment, put forward by Chesterton, that the random chance of being born the eldest son of a peer introduces a note of popul- ism, of true democracy, into the Lords. To get there you do not have to be a party hack or good at climbing the old boy net. The hereditary principle does indeed intro- duce a refreshing stream into Parliament. But it is a narrow one. Anyone who looks at the Lords on television must notice the sea of pink, male faces. There are some excellent women, but nowhere near enough. Many of them seem to have been made life peers because of their husbands. There are, I believe, four peers who are not 'white'. Only two, I think, attend at all regularly. Here is an enormous missed opportunity. But even if the ludicrously small quota of women among recent lists of life peerages were increased (Mrs Thatcher has recommended no coloured peers) it is probable that only women pickled in office and successful in male estimation would be appointed. To put the Chesterton principle into practice we should have chosen peers by lottery (or by separate lotteries among men, women, West Indians etc).

Another role suggested for the Lords is that it should give the Commons a chance to have second thoughts. While not throw- ing out Bills it should courteously point out some arguments, perhaps overlooked in the Commons hurly-burly, and recom- mend reconsideration. This in practice means reconsideration by the government. It is not a negligible suggestion: but three warnings might be issued. The notion that a period of delay imposed by the Lords will be used for cool and rational discussion in the Cabinet, the Commons and the nation at large, is optimistic. Secondly, the Lords (believe it or not) is not always right. The notion that peers are particularly sagacious needs to be taken with a spoonful of salt. Thirdly it is in their first year when they are inflicting their dreaded manifestos on us that governments need to be restrained, but it is in their last, when, like this one, they have run out of steam, that the Lords can be most effective as a brake. Neverthe- less, over the first Bill to reform the government of London they performed a useful service by forcing the Government to think again. If all peers are not wise, many have experience in all sorts of mat- ters from religion to finance. The quality of Lords debates is often praised. Since listen- ing to them I have rather revised my opinion about them. It is certainly useful to have some speakers with experience in running the affair under review. But not too many. Foreign affairs debates are apt to be staffed by a platoon of ex- ambassadors, defence debates by generals and so on. They have usually been retired for some years and tend to agree with one another. Their presence is apt to inhibit mere amateurs, especially in a Chamber renowned for its deference. The general debates in ,, the Lords, well-informed though they may be, are rather reminiscent of those conferences so beloved by the British in which elegant contributions are made by the elderly great and good un- directed to any immediate end.

I doubt if the holding of seminars is an important function for the Lords. I say 'I doubt' rather than pronouncing dogmatic- ally that it is not a suitable activity, because if anyone takes any notice of these semi- nars, it may be. And perhaps in the inner recesses of the civil service they do take note. I don't see much sign of it, but it may happen. I don't think even with television that we can claim much influence on public opinion.

What I hope no one outside it believes is that the Lords should be a copy of the Commons. Yet this is what it sometimes seems to be attempting. Hence, for inst- ance, the demand for 'working peers', so rightly criticised in the Spectator. Un- doubtedly, some peers work very hard: the Opposition front bench, for example. Un- doubtedly too under the present conven- tion we must have a 'shadow' government to face the actual government. Is the convention necessary? I doubt it. But even while it persists it does not seem to me that we need official party spokesmen in every debate and at every question time. I am not sure that every statement in the Com- mons (statements have proliferated in the last 20 years) needs repetition and com- ment in the Lords. The demand for 'work- ing peers' arises from a mistaken view of what our parliamentary system lacks.

The bureaucratic attitude has invaded Parliament as it has all our other activities. Politicians are becoming professionals. Members of Parliament in both Houses are losing sight of their duty to represent the general interests of the ordinary person. We have in many respects a corporate state in which special interests, lobbies, orga- nisations — professional and trade union — wield the dominating influence. Gov- ernment is taken up with its own internal affairs, in satisfying bureaucracies, main- taining its own practices and extending its own machinery. It is like a man so intent upon the engine of his car that he forgets about the passengers. Government too has lost touch with common sense. Can there be anything more absurd or more typical of the British disease than the decision of the Secretary of State for Scotland to retain the ludicrous rating system but charge the

taxpayers £40 million to offset its defects? In the debates in the House of Lords on the local government Bill, 'consumer' of local government and the ratepayer have been mentioned all too little. Most of those outside the favoured minorities and the rate-relieved consider that they get a very bad bargain from local government. As is vividly illustrated by the conduct of the GLC, all authorities develop an interest of their own different from that of those that they are supposed to serve. The point was illustrated lately when a peer rose indig- nantly and accused Lord Boyd-Carpenter of debating and of never having served on a local authority. If Parliament is not to debate it is difficult to know why we have it; while more views from those who do not see local government only from the point of view of the councillor and official are exactly what is needed. As it is, peers on all sides have been vying with each other to pile more authority, quangos etc on the citizen.

You are unlikely to get the voice of the people amplified through 'working peers'. They will be ex-MPs, ex-councillors, ex- bureaucrats or ex-party officials, or dedi- cated party supporters. Nor are they likely to express unusual opinion or those not often heard in the Commons. And I repeat that there is not much purpose in going over in the Lords the party arguments already rehearsed elsewhere. Three speeches which particularly struck me in my short sojurn in the so-called Upper House were a proposal that we should negotiate the handing over of the Falk- lands to the Argentines, by Lord Elibank, an exposition of the planning law by Lord Culross and a plea that farmed deer should not be slaughtered in abattoirs by Lord Massereene. They were speeches or ques- tions in content and form unlikely to be made in the Commons. Incidentally, none of the speakers is a Life Peer. Lord Massereene looks a little like the nicest sort of deer and so may have an empathy with these animals unlikely to be found in working peers.

Whether anyone took any notice of them I do not know. Occasionally conscientious ministers such as Sir Keith Joseph and Mr Patrick Jenkin sit on the steps of the throne. With what result who knows? There is something to be said for allowing Cabinet ministers to speak in the Lords and dispensing with the routine duties of their noble juniors. There seems to me a case for election to a second chamber for a fixed term, big constituencies and PR, with some alteration to the Lords' powers and a veto on any peer becoming a minister. But these are remote possibilities. In the mean- time let us have a much bigger intake of black, yellow and female peers from out- side the bureaucracies, and reasonably young peers who will not be drudges to the routine nor slaves to self-interested lobbies but turn up occasionally when moved to do so by some strong personal urge. I am in favour of the House of Lords doing no- thing in particular but doing it very well.