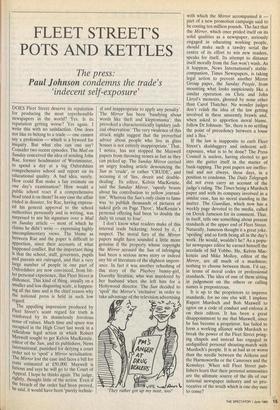 DOES Fleet Street deserve its reputation for producing the most reprehensible newspapers in the world? Yes. Is its reputation getting worse? Yes again. I write this with no satisfaction. One does not like to belong to a trade — one cannot say a profession — which is a byword for iniquity. But what else can one say? Consider two recent episodes. The Mail on Sunday conceived the idea of sending John Rae, former headmaster of Westminster, to spend a day at a big Oxfordshire comprehensive school and report on its educational quality. A bad idea, surely. How could Rae make a fair estimate on one day's examination? How would a public school react if a comprehensive head tried it on them? In any case the affair ended in disaster, for Rae, having express- ed his general approval to the school authorities personally and in writing, was surprised to see his signature over a Mail on Sunday article — most of which he claims he didn't write — expressing highly uncomplimentary views. The blame as between Rae and the paper is difficult to apportion, since their accounts of what happened conflict. But the important thing is that the school, staff, governors, pupils and parents are outraged, and that a very large number of people in one part of Oxfordshire are now convinced, from bit- ter personal experience, that Fleet Street is dishonest. This kind of thing, usually on a smaller and less disgusting scale, is happen- ing all the time and is the chief reason why the national press is held in such low regard.

The appalling impression produced by Fleet Street's scant regard for truth is reinforced by its shamelessly frivolous sense of values. Much time and space was occupied in the High Court last week in a ridiculous legal action in which Robert Maxwell sought to get Kelvin MacKenzie, editor of the Sun, and its publishers, News International, punished for defying a court order not to 'spoil' a Mirror serialisation. The Mirror lost the case and faces a bill for costs estimated at £50,000. Maxwell is furious and says he will go to the Court of Appeal. I hope he thinks again. The judge, rightly, thought little of the action. Even if the breach of the order had been proved, he said, it would have been 'purely technic-

al and inappropriate to apply any penalty'. The Mirror has been 'bandying about words like theft and kleptomania'; this provoked a characteristically lapidary judi- cial observation: 'The very virulence of this attack might suggest that the proverbial advice about people who live in glass houses is not entirely inappropriate.' That, I notice, has not stopped the Maxwell papers from throwing stones as fast as they can picked up. The Sunday Mirror carried an angry leading article denouncing the Sun as 'crude', or rather 'CRUDE', and accusing it of 'lies, deceit and double- dealing'. Its editor, Kelvin MacKenzie, said the Sunday Mirror, 'openly boasts about his contribution to yellow journal- ism'. Whereas the Sun's only claim to fame was 'to publish thousands of pictures of naked girls on Page Three', MacKenzie's personal offering had been `to double the daily tit count to four'.

I don't know what readers make of this internal trade bickering: bored by it, I suspect. The moral fury of the Mirror papers might have sounded a little more genuine if the property whose copyright the Mirror accused the Sun of infringing had been a serious news story or indeed any bit of literature of the slightest import- ance. In fact it was another rehashing of the, story of the Playboy bunny-girl, Dorothy Stratten, who was murdered by her husband when she left him for a Hollywood director. The Sun decided to 'spoil' the Mirror's 'exclusive' in order to take advantage of the television advertising - 'They rather got up my nose, too!' with which the Mirror accompanied it part of a new promotion campaign said to be costing ten million pounds. The fact that the Mirror, which once prided itself on its solid qualities as a newspaper, seriously engaged in educating working people, should make such a tawdry serial the centre of its effort to win new readers, speaks for itself. Its attempt to distance itself morally from the Sun won't wash. As it happens, News International's stable- companion, Times Newspapers, is taking legal action to prevent another Mirror Group paper, the Sunday People, from mounting what looks suspiciously like a similar operation on Chris and John Lloyd's memoirs, ghosted by none other than Carol Thatcher. No wonder judges don't relish the idea of the law getting involved in these unseemly brawls and, when asked to apportion moral blame, follow Dr Johnson: 'Sir, there is no settling the point of precedency between a louse and a flea.'

If the law is inapposite to curb Fleet Street's skulduggery and indecent self- exposure, what is to be done? The Press Council is useless, having elected to get into the gutter itself in the matter of bank-tapping. The post papers are ineffec- tual and not always, these days, in a position to condemn. The Daily Telegraph did not even carry an account of the judge's ruling. The Times being a Murdoch paper and with its company involved in a similar case, has no moral standing in the matter. The Guardian, which now has a weekly page devoted to the media, called on Derek Jameson for its comment. That, in itself, tells one something about present standards at the upper end of Fleet Street. Naturally, Jameson thought it a great joke, `spoiling' and so forth being all in the day's work. He would, wouldn't he? As a popu- lar newspaper editor he earned himself the accolade of Sid Yobbo. He, Kelvin Mac- kenzie and Mike Molloy, editor of the Mirror, are all much of a muchness; nothing to choose between them, I'd say, in terms of moral codes or professional standards. The idea of one of them sitting in judgement on the others or calling names is preposterous.

It is up to the proprietors to improve standards, for no one else will. I implore Rupert Murdoch and Bob Maxwell to agree on a code of conduct and enforce it on their editors. It has been a great disappointment to me that Maxwell, since he has become a proprietor, has failed to form a working alliance with Murdoch to break the power of the Fleet Street pring- ing chapels and instead has engaged in undignified personal shouting-match with Murdoch's people. It is as bad as or worse than the needle between the Aitkens and the Harmsworths or the Camroses and the Kemsleys. When will Fleet Street pub- lishers learn that their personal animosities are the ultimate source of the ills of our national newspaper industry and so pro- vocative of the wrath which is one day sure to come?