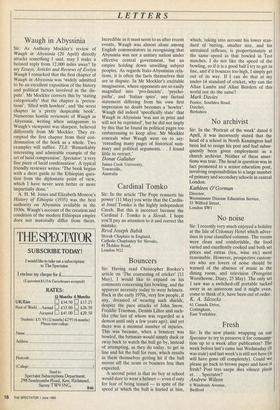 Sir: As Anthony Mockler's review of Waugh in Abyssinia (20 April) directly attacks something I said, may I make a belated reply from 12,000 miles away? In my Essays, Articles and Reviews of Evelyn Waugh I remarked that the first chapter of Waugh in Abyssinia was 'widely admitted to be an excellent exposition of the history and political factors involved in the dis- pute'. Mr Mockler corrects this by 'stating categorically' that the chapter is 'preten- tious', 'filled with howlers', and 'the worst chapter in a pretty despicable book'. Numerous hostile reviewers of Waugh in Abyssinia, writing when antagonism to Waugh's viewpoint was sharpest, believed differently from Mr Mockler. They ex- empted the first chapter from their con- demnation of the book as a whole. Two examples will suffice. TLS: 'Remarkably interesting and admirable example of the art of lucid compression'. Spectator: 'a very fine piece of lucid condensation'. A typical friendly reviewer writes: 'The book begins with a short guide to the Ethiopian ques- tion from the diplomatic point of view, which I have never seen better or more impartially done.'

A. H. M. Jones and Elizabeth Monroe's History of Ethiopia (1935) was the best authority on Abyssinia available in the 1930s. Waugh's account of the creation and condition of the modern Ethiopian empire does not materially differ from theirs. Incredible as it must seem to us after recent events, Waugh was almost alone among English commentators in recognising that Abyssinia was not a unitary nation under effective central government, but an empire holding down unwilling subject peoples. As regards Italo-Abyssinian rela- tions, it is often the facts themselves that are in dispute. In Mr Mockler's excitable imagination, where opponents are so easily magnified into 'pro-fascists', 'psycho- paths', and 'Italian spies', any factual statement differing from his own first impression no doubt becomes a 'howler'. Waugh did indeed 'specifically state' that Waugh in Abyssinia 'was not in print and will not be reprinted', but he did not imply by this that he found its political pages too embarrassing to keep alive. Mr Mockler conceals what Waugh went on to say: 'rereading many pages of historical sum- mary and political arguments. . . I found little to retract.'