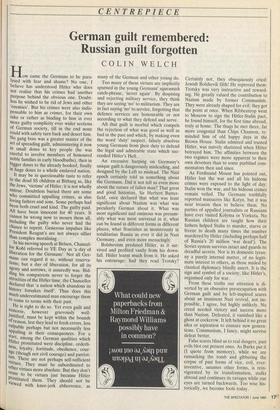 How came the Germans to be para- lysed with fear and shame? No one, I believe has understood Hitler who does not realise that his crimes had another Purpose behind the obvious one. Doubt- less he wished to be rid of Jews and other 'enemies'. But his crimes were also indis- pensable to him as crimes, for their own sake or rather as binding to him in ever more guilty complicity ever wider sections of German society, till in the end none Could with safety turn back and desert him. No gang boss was a greater master of the art of spreading guilt, administering it now in small doses to key people (he was careful to involve members of honoured noble families in early bloodbaths), then in bigger doses to the already hooked, finally in huge doses to a whole enslaved nation.

It may be in questionable taste to refer to the dead SS children at Bitburg as, like the Jews, 'victims' of Hitler; it is not wholly untrue. Doubtless buried there are some who committed appalling crimes, as also loving fathers and sons. Some perhaps had been both cruel and kind. The guilty paid. All have been innocent for 40 years. It cannot be wrong now to mourn them all, including the guilty who never had the chance to repent. Generous impulses like President Reagan's are not always sillier than complex moralising. In his moving speech at Belsen, Chancel- lor Kohl referred to VE Day as 'a day of liberation for the Germans'. Not all Ger- mans can regard it so, without reserva- tions; but a day of liberation, for all its agony and sorrows, it assuredly was. Bid-

His compatriots never to forget the atrocities of the Hitler time, the Chancellor declared that 'a nation which abandons its history forsakes itself . Thus does this much underestimated man encourage them to come to terms with their past. He is right to do so. Yet even guilt and remorse, however grievously well- justified, must be kept within the bounds of reason, lest they lead to fresh errors, less culpable perhaps but not necessarily less appalling in their consequences. For a start, among the German qualities which Hitler prostituted were discipline, orderli- ness, loyalty, fortitude, obedience, cour- age (though not civil courage) and patriot- isin. These are not perhaps self-sufficient virtues. They must be subordinated to other virtues more absolute. But they don't cease to be virtues just because Hitler Prostituted them. They should not be viewed with knee-jerk abhorrence, as many of the German and other young do.

Too many of these virtues are implicitly spurned in the young Germans' squeamish catch-phrase, 'never again'. By despising and rejecting military service, they think they are saying 'no' to militarism. They are in fact saying 'no' to service, forgetting that defence services are honourable or not according to what they defend and serve.

All that guilt is morbid which compels the rejection of what was good as well as bad in the past and which, by making even the word 'duty' suspect, falsely absolves young Germans from their duty to defend the legal and admirable state which suc- ceeded Hitler's Hell.

An excessive harping on Germany's unique guilt is dangerously misleading, and designed by the Left to mislead. The Nazi epoch certainly told us something about the Germans. Did it not tell us even more about the nature of fallen man? That great and good historian, Sir Herbert Butter- field, once declared that what was least significant about Nazism was what was peculiarly German about it. What was most significant and ominous was presum- ably what was most universal in it, what can be found in different forms in different places, what flourishes as monstrously in totalitarian Russia as ever it did in Nazi Germany, and even more menacingly.

Bolshevism predated Hitler, as it sur- vived and profited vastly from his down- fall. Hitler learnt much from it. He asked his entourage: had they read Trotsky? Certainly not, they obsequiously cried: Jewish Bolshevik filth! He reproved them: Trotsky was very instructive and reward- ing. He greatly valued the contribution to Nazism made by former Communists. They were already shaped for evil: they got the point at once. When Ribbentrop went to Moscow to sign the Hitler-Stalin pact, he found himself, for the first time abroad, truly at home. The thugs he met there, far more congenial than Chips Channon, re- minded him of old happy days in the Brown House. Stalin admired and trusted Hitler, was naïvely shattered when Hitler betrayed him. The affinities between the two regimes were more apparent to their own devotees than to some purblind com- mentators then and since.

As Ferdinand Mount has pointed out, Hitler lost the war and all his hideous crimes were exposed to the light of day: Stalin won the war, and his hideous crimes remain veiled. The Germans truthfully reported massacres like Katyn, but it was near treason then to believe them. No parties of appalled journalists or Russians have ever visited Kolyma or Vorkuta. No Russian children are taught how their fathers helped Stalin to murder, starve or freeze to death many times the number murdered by Hitler (including perhaps half of Russia's 20 million 'war dead'). The Soviet system survives intact and guards its dreadful secrets. Nor is its domestic tyran- ny a purely internal matter, of no legiti- mate interest to others, as those misled by classical diplomacy blindly assert. It is the sign and symbol of a society, like Hitler's, organised only for war.

From these truths our attention is di- verted by an obsessive preoccupation with German guilt and by left-inspired scares about an imminent Nazi revival, not im- possible, I agree, but highly unlikely. No creed needed victory and success more than Nazism. Defeated, it vanished like a ghost at cockcrow. It left behind it no great idea or aspiration to ensnare new genera- tions. Communism, I fancy, might survive defeat better.

False scares blind us to real dangers, past evils blot out present ones. As Burke put it (I quote from memory), while we are ransacking the tomb and gibbeting the corpse of past forms of vice, evil, ever- inventive, assumes other forms, is rein- vigorated by its transformation, stalks abroad and continues its ravages while our eyes are turned backwards. Too wise his- torically, we become fools today.