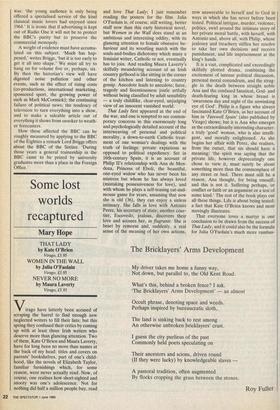 My driver takes me home a funny way, Not down, but parallel to, the Old Kent Road.

What's this, behind a broken fence? I ask.

'The Bricklayers' Arms Development' — an almost Occult phrase, denoting space and weeds. Perhaps inspired by bureaucratic sloth, The land is sinking back to rest among An otherwise unbroken bricklayers' crust.

I guess the city purlieus of the past Commonly held poets speculating on Their ancestors and scions, driven round (If they were lucky) by knowledgeable slaves - A pastoral tradition, often augmented By flocks cropping the grass between the stones.