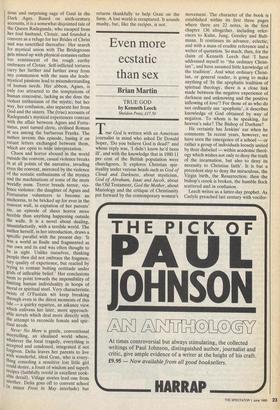 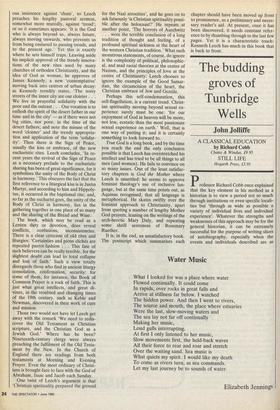 Even more ecstatic than sex

True God is written with an American journalist in mind who asked Dr Donald Soper, 'Do you believe God is dead?' and whose reply was, 'I didn't know he'd been ill', and with the knowledge that in 1980 11 per cent of the British population were churchgoers. It explores Christian spir- ituality under various heads such as God of Cloud and Darkness, about mysticism, God of Abraham, Isaac and Jacob, about the Old Testament, God the Mother, about Mariology and the critique of Christianity put forward by the contemporary women's

movement. The character of the book is established within its first three pages where there are 22 notes, in the first chapter 136 altogether, including refer- ences to Kuhn, Jung, Greeley and Bult- mann. It continues its advance, eclectic, and with a mass of erudite reference and a welter of quotation. So much, then, for the claim of Kenneth Leech that 'I have addressed myself to "the ordinary Christ- ian", and have assumed little knowledge of the tradition'. And what ordinary Christ- ian, or general reader, is going to make anything of 'In the apophatic tradition of spiritual theology, there is a close link made between the negative experience of darkness and unknowing and the positive inflowing of love"? For those of us who do not ordinarily use `apophatic', it describes knowledge of God obtained by way of negation. To whom is he speaking, for heaven's sake? The Bishop of Durham?

He certainly has Jenkins' ear when he comments 'In recent years, however, we have seen the emergence of a school — or rather a group of individuals loosely united by their disbelief — within academic theol- ogy which wishes not only to deny the truth of the incarnation, but also to deny its necessity to Christian faith'. It is but a precedent step to deny the miraculous, the Virgin birth, the Resurrection: then the bishop's crook is broken, the humble flock scattered and in confusion.

Leech writes as a latter-day prophet. As Carlyle preached last century with vocifer- ous insistence against 'sham', so Leech preaches his lengthy pastoral sermon, somewhat more mutedly, against 'trend'; or so it sometimes appears: 'It is the God who is always beyond us, always future, always moving onwards, who prevents us from being enslaved to passing trends, and to the present age.' Yet this is exactly where he sets himself traps. Leaving aside his implicit approval of the trendy innova- tions of the new rites used by many churches of orthodox Christianity, and the idea of God as woman, he approves of James Kennedy, a new 'contemplative' moving back into centres of urban decay: as Kennedy trendily states, 'The noisy streets of the inner city are our cloister . . . We live in prayerful solidarity with the poor and the outcast . . . Our vocation is to enflesh the spirit of the desert father in our time and in the city' — as if there were not big cities, nor poor, in the time of the desert fathers; and note the misuse of the word 'cloister' and the trendy appropria- tion and application of the term 'solidar- ity'. Then there is the Sign of Peace, usually the kiss or embrace, of the new eucharistic rites. Leech concludes, 'In re- cent years the revival of the Sign of Peace as a necessary prelude to the eucharistic sharing has been of great significance, for it symbolises the unity of the Body of Christ in harmony.' This obscures the fact that the first reference to a liturgical kiss is in Justin Martyr, and according to him and Hippoly- tus, it occurred in the baptismal rite; and, so far as the eucharist goes, the unity of the Body of Christ in harmony, lies in the gathering together in one place of so many and the sharing of the Bread and Wine.

The book, which may be read as a Lenten duty or devotion, does reveal conflicts, confusions, inconsistencies. There is a clear criticism of old rites and liturgies: 'Certainties and pious clichés are repeated parrot-fashion . . . This fate of such believers can be really terrible, for the slightest doubt can lead to total collapse and loss of faith.' Such a view totally disregards those who find in ancient liturgy consolation, confirmation, security: for some of them, for instance, the Book of Common Prayer is a rock of faith. This is just what great intellects, and great di- vines, in the troubled and changing times of the 19th century, such as Keble and Newman, discovered in their work of cure and mission.

Those two would not have let Leech get away with the remark 'We need to redis- cover the Old Testament as Christian scripture, and the Christian God as a Jewish God.' Where has he been?

Nineteenth-century clergy were always preaching the fulfilment of the Old Testa- ment by the New. In the Church of England there are readings from both testaments at Morning and Evening Prayer. Even the most ordinary of Christ- ians is brought face to face with the God of Abraham, Isaac and Jacob each Sunday.

One twist of Leech's argument is that 'Christian spirituality prepared the ground for the Nazi atrocities', and he goes on to ask fatuously 'is Christian spirituality possi- ble after the holocaust?' He repeats at another point, 'The horrors of Auschwitz . . . were the terrible conclusion of a long tradition of thought and feeling, of a profound spiritual sickness at the heart of the western Christian tradition.' What such monstrous statements, of course, do ignore is the complexity of political, philosophic- al, and mad racial theories at the centre of Nazism, and the principles of love at the centre of Christianity: Leech chooses to ignore the example of the Good Samar- itan, the circumcision of the heart, the Christian embrace of Jew and Gentile.

Perhaps this self-condemnation, this self-flagellation, is a current trend. Christ- ian spirituality moving beyond sexual ex- perience surely must be one: 'for our enjoyment of God in heaven will be more, not less, ecstatic than the most passionate sexual experience on earth.' Well, that is one way of putting it; and it is certainly something to look forward to.

True God is a long book, and by the time you reach the end the only conclusion possible is that Leech has overstretched his intellect and has tried to be all things to all men (and women). He fails to convince on so many issues. One of the least satisfac- tory chapters is God the Mother where Leech is unsettled: he seems to approve feminist theology's use of inclusive lan- guage, but at the same time points out, as Aquinas recognised, that all language is metaphorical. He skates swiftly over the feminist approach to Christianity, apart from quoting a number of lengthy Mother God prayers, leaning on the writings of the arch-heretic Mary Daly, and repeating some shrill sentences of Rosemary Ruether.

It is, in the end, an unsatisfactory book. The postscript which summarises each chapter should have been moved up front to prominence, as a preliminary and neces- sary reader's aid. At present, once it has been discovered, it needs constant refer- ence to by thumbing through to the last few pages. Yet it is a characteristic touch: Kenneth Leech has much in this book that is back to front.