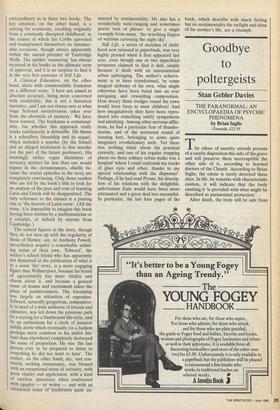 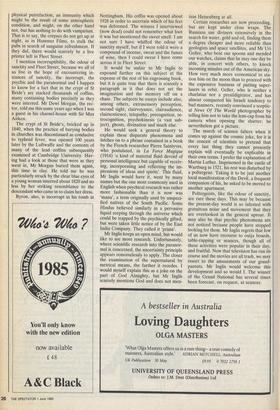 THE PARANORMAL: AN ENCYCLOPAEDIA OF PSYCHIC PHENOMENA by Brian Inglis

The odour of sanctity attends persons of a saintly disposition this side of the grave and will preserve them incorruptible the other side of it, according to learned doctors of the Church. According to Brian Inglis, the odour is rarely detected these days. In life, he remarks with characteristic caution, it will indicate that the body emitting it 'is provided with what might be described as paranormal protection'.

After death, the body will be safe from physical putrefaction, an immunity which might he the result of some atmospheric condition, and might, on the other hand not, but has nothing to do with vampirism. That is to say, the corpses do not get up at night, as in Hammer Films, to stalk the pubs in search of sanguine refreshment. If they did, there would scarcely be a live printer left in Fleet Street.

I mention incorruptibility, the odour of sanctity and Fleet Street, because we all of us live in the hope of encountering in- stances of sanctity, the incorrupt, the psychic and the paranormal and I happen to know for a fact that in the crypt of St Bride's are stacked thousands of coffins, many containing bodies precisely as they were interred. Mr Dewi Morgan, the rec- tor, told me this some years ago when I was a guest in his charnel-house with Sir Max Aitken.

The crypt of St Bride's, bricked up in 1840, when the practice of burying bodies in churches was discontinued as conducive to typhoid fever, was opened 100 years later by the Luftwaffe and the contents of many of the lead coffins subsequently examined at Cambridge University. Hav- ing had a look at those that were as they went in, Mr Morgan buried them again, this time in clay. He told me he was particularly struck by the clear blue eyes of a young woman interred about 1820 and no less by her striking resemblance to the descendant who came in to claim her dress.

Byron, also, is incorrupt in his tomb at Nottingham. His coffin was opened about 1928 in order to ascertain which of his feet was deformed. The witness I interviewed (now dead) could not remember what foot it was but mentioned the sweet smell. I am not sure I have whiffed the odour of sanctity myself, but if I were told it were a compound of incense, sweat and the fumes of wine, then I could swear I have come across it in Fleet Street.

It would be unfair to Mr Inglis to expound further on this subject at the expense of the rest of his engrossing book, but it is quite true that there is scarcely a paragraph in it that does not set the imagination and the memory off on a chase. The subjects he essays include also, among others, extrasensory perception, second sight, clairvoyance, clairaudience, clairsentience, telepathy, precognition, re- trocognition , psychokinesis (a vast sub- ject), ghosts, divination and much else.

He would seek a general theory to explain these disparate phenomena and latches on to a phrase contained in a book by the French researcher Pierre Saintyves, who postulated, in La Force Magique (1914) 'a kind of material fluid devoid of personal intelligence but capable of receiv- ing, incorporating and reflecting the im- pressions of ideas and spirits'. This fluid, Mr Inglis would have it, went by many names but the one most commonly used in English when psychical research was rather more fashionable than it is now was `mana', a term originally used by unspeci- fied natives of the South Pacific. Some Hindus believed similarly in a pervasive liquid seeping through the universe which could be trapped by the psychically gifted, but were taken little notice of by the East India Company. They called it `prana'.

Mr Inglis keeps an open mind, but would like to see more research. Unfortunately, where scientific research into the paranor- mal is concerned, the uncertainty principle appears remorselessly to apply. The closer the examination of the supernatural by metrical means, the further it recedes. I would myself explain this as a joke on the part of God Almighty, but Mr Inglis scarcely mentions God and does not men- tion Heisenberg at all.

Certain researches are now proceeding, but are kept under close wraps. The Russians use diviners extensively in the search for water, gold and oil, finding them a degree cheaper and more reliable than geologists and space satellites, and Mr Uri Geller, who bent our spoons and mended our watches, claims that he may one day be able, in concert with others, to knock incoming missiles out of the American sky. How very much more economical to sta- tion him on the moon than to proceed with the expensive business of putting super- lasers in orbit. Geller, who is neither a charlatan nor a prestidigitator, and has almost conquered his Israeli tendency to bad manners, recently convinced a sceptic- al News Of The World photographer by telling him not to take the lens-cap from his camera when opening the shutter; he nevertheless got a picture.

The march of science falters when it comes up against the cosmic joke, for it is the conceit of scientists to pretend that every last thing they cannot presently explain will eventually be explicable in their own terms. I prefer the explanation of Martin Luther. Imprisoned in the castle of Wartburg in 1521, his rest was disturbed by a poltergeist. Taking it to be just another local manifestation of the Devil, a frequent companion of his, he asked to be moved to another apartment.

Poltergeists, like the odour of sanctity, are rare these days. This may be because the present-day world is so infested with gratuitous noise and movement that they are overlooked in the general uproar. It may also be that psychic phenomena are not noticed because people have stopped looking for them. Mr Inglis regrets that few of us now have recourse to ouija boards, table-rapping or seances, though all of these activities were popular in their day, and fruitful. Now that television has run its course and the movies are all trash, we may resort to the amusements of our grand- parents. Mr Inglis would welcome this development and so would I. The winner of the Grand National has several times been forecast, on request, at seances.