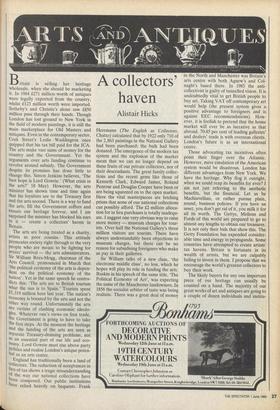 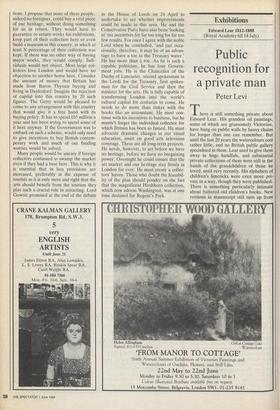 Britain is selling her heritage wholesale, when she should be marketing it. In 1984 £271 million worth of antiques were legally exported from the country, whilst £123 million worth were imported. Sotheby's and Christie's alone saw £850 million pass through their hands. Though London has lost ground to New York in the field of modern paintings, it is still the main marketplace for Old Masters and antiques. Even in the contemporary sector, Cork Street's Leslie Waddington once quipped that his tax bill paid for the ICA. The arts make vast sums of money for the country and the Government. Yet the arguments over arts funding continue to revolve around subsidy. The Government despite its promises has done little to change this. Simon Jenkins believes, 'The best hope is Lord Gowrie.' (What crisis in the arts?' 18 May). However, the arts minister has shown time and time again that his loyalties are to the Treasury first and the arts second. There is a way to fund the arts, fill the Government coffers and ensure our heritage forever, and I am surprised the minister has blocked his ears to it — create a collectors' haven in Britain.

The arts are being treated as a charity, artists as poor cousins. This attitude permeates society right through to the very People who are meant to be fighting for artists' survival — the arts administrators. Sir William Rees-Mogg, chairman of the Arts Council, pronounced in March that 'the political economy of the arts is depen- dent on the political economy of the nation'. Yet in the same speech he contra- dicts this: 'The arts are to British tourism what the sun is to Spain.' Tourists spent £5,319 million here last year. The nation's economy is boosted by the arts and not the other way round. Unfortunately the arts are victims of clashing economic ideolo- gies. Whatever one's views on free trade, the Government is going to have to take the first steps. At the moment the heritage and the funding of the arts are seen as separate Treasury-draining problems, not as an essential part of our life and eco- nomy. Lord Gowrie must rise above party politics and realise London's unique poten- tial as an arts centre.

England has traditionally been a land of Collectors. The reduction of acceptances in lieu of tax shows a tragic misunderstanding of the way our national collections have been composed. Our public institutions have relied heavily on bequests. Frank Herrmann (The English as Collectors, Chatto) calculated that by 1922 only 710 of the 2,863 paintings in the National Gallery had been purchased; the bulk had been donated. The emergence of the modern tax system and the explosion of the market mean that we can no longer depend on these fruits of our private collectors, nor of their descendants. The great family collec- tions and the recent gems like those of Kenneth Clark, Edward James, Roland Penrose and Douglas Cooper have been or are being squeezed on to the open market. Here the vital masterpieces are fetching prices that none of our national collections can possibly afford. The £2 million alloca- tion for in lieu purchases is totally inadequ- ate. I suggest one very obvious way to raise more money — museum charges for tour- ists. Over half the National Gallery's three million visitors are tourists. There have always understandably been objections to museum charges, but there can be no reason for subsidising foreigners who make us pay in their galleries.

Sir William talks of a new class, 'the electronic middle class', no less, which he hopes will play its role in funding the arts. Ruskin in his speech of the same title, 'The Political Economy of Art', was expecting the same of the Manchester landowners. In 1856 the socialist arbiter of taste was being realistic. There was a great deal of money in the North and Manchester was Britain's arts centre with both Agnew's and Col- naghi's based there. In 1985 the anti- collectivist is guilty of tunnelled vision. It is undoubtedly vital to get British people to buy art. Taking VAT off contemporary art would help (the present system gives a positive advantage to foreigners and is against EEC recommendations). How- ever, it is foolish to pretend that the home market will ever be as lucrative as that abroad. 70-85 per cent of leading galleries' and dealers' trade is with overseas clients. London's future is as an international centre.

Those advocating tax incentives often point their finger over the Atlantic.

However, mere emulation of the American system would be disastrous. London has different advantages from New York. We have the heritage. Why flog it outright, when we could reap its benefits for ever? I am not just referring to the aesthetic benefits, but the financial. Let us be Machiavellian, or rather pursue plain, sound, business policies. If you have an asset, you don't get rid of it, you milk it for all its worth. The Gettys, Mellons and Fords of this world are prepared to go to almost any lengths to obtain our treasures. It is not only their bids that show this. The Getty Foundation has expended consider- able time and energy in propaganda. Some countries have attempted to create artists' tax havens. Britain is fortunate in its wealth of artists, but we are culpably failing to invest in them. I propose that we encourage the world's greatest collectors to buy their work.

The likely buyers for any one important piece of our heritage can usually be counted on a hand. The majority of our great works of art and antiques are going to a couple of dozen individuals and institu- tions. I propose that none of these people, indeed no foreigner, could buy a vital piece of our heritage, without doing something for us in return. They would have to guarantee to return works for exhibitions, keep part of their collection here or even build a museum in this country, in which at least X percentage of their collection was kept. If there was no other way of buying major works, they would comply. Indi- viduals would not object. Most large col- lectors love London and would have no objection to another home here. Consider the amount of money that Britain has made from Baron Thyssen buying and living in Daylesford. Imagine the injection of capital into this country by 20 such figures. The Getty would be pleased to come to any arrangement with this country that would give it a free hand with its buying policy. It has to spend £65 million a year and has been trying to spend some of it here anyway. If the Government was to embark on such a scheme, would only need to give incentives to buy British contem- porary work and much of our funding worries would be solved.

Many people would be uneasy if foreign collectors continued to swamp the market even if they had a base here. This is why it is essential that in lieu provisions are increased, preferably at the expense of tourists as it is only mete and right that the arts should benefit from the tourism they play such a crucial role in attracting. Lord Gowrie promised at the end of the debate in the House of Lords on 24 April to undertake to see whether improvements could be made in this area. He and the Conservative Party have also been 'looking at' tax incentives for far too long for far too few results. For once I agree with the noble Lord when he concluded, 'and just occa- sionally, therefore, it may be of an advan- tage to have a toe in the Treasury water.' He has more than a toe. As he is such a capable politician, he has four Govern- ment jobs. He is the Chancellor of the Duchy of Lancaster, second spokesman in the Lords for the Treasury, first spokes- man for the Civil Service and then the minister for the arts. He is fully capable of transforming London into the world's cultural capital for centuries to come. He needs to do more than tinker with the books like an accountant. He must con- tinue with his incentives to business, but he mustn't forget the individual collector for which Britain has been so famed. He must advocate dramatic changes in our visual education, insist on good arts television coverage. These are all long-term projects. He needs, however, to act before we have no heritage, before we have no bargaining power. Overnight he could ensure that the art market and our heritage stay firmly in London for ever. He must create a collec- tors' haven. Those who doubt the feasabil- ity of the plan should ponder on the fact that the magnificent Hirshhorn collection, which now adorns Washington, was at one time destined for Regent's Park.