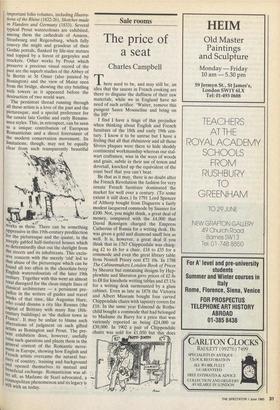 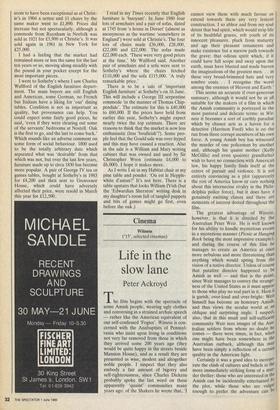 The price of a seat

There used to be, and may still be, an idea that the sauces in French cooking are there to disguise the duffness of their raw materials, while we in England have no need of such artifice. 'Waiter, remove this pungent Sauce Mousseline and bring on the HP.'

I find I have a tinge of this prejudice when thinking about English and French furniture of the 18th and early 19th cen- tury. I know it to be untrue but I have a feeling that all that ebenisterie and all those Sevres plaques were there to hide shoddy continental workmanship whereas our stal- wart craftsmen, wise in the ways of woods and grain, subtle in their use of tenon and dovetail, knocked up the equivalent of the roast beef that you can't beat.

Be that as it may, there is no doubt after the French Revolution the fashion for very ornate French furniture dominated the market for well over a century. (To some extent it still does.) In 1791 Lord Spencer of Althorp bought from Daguerre a fairly modest lacquered commode by Saunier for £100. Not, you might think, a great deal of money, compared with the £4,000 that David Roentgen charged the Empress Catherine of Russia for a writing desk. He was given a gold and diamond snuff box as well. It is, however, a great deal if you think that in 1767 Chippendale was charg- ing £2 to £6 for a chair, £18 to £35 for a commode and even the great library table from Nostell Priory cost £72 10s. In 1788 The Cabinetmakers London Book of Prices by Shearer but containing designs by Hep- plewhite and Sheraton gave prices of £2 8s to £8 for kneehole writing tables and £5 15s for a writing desk surmounted by a glass cabinet. Even as late as 1878 the Victoria and Albert Museum bought four carved Chippendale chairs with tapestry covers for £16. In the same year Edmond de Roths- child bought a commode that had belonged to Madame du Barry for a price that was variously reported as being £24,000 or £30,000. In 1902 a pair of Chippendale chairs was sold for £1,050 but this does ep • • misetorm

I had a feeling that the market had remained more or less the same for the last ten years or so, moving along steadily with the pound in your pocket except for the most important pieces.

I went to Sotheby's where I saw Charles Wallford of the English furniture depart- ment. The main buyers are still English and American, some German, no French but Italians have a liking for `our' dining tables. Condition is not as important as quality, but provenance can help. You could expect some fairly good prices, he said, 'even if they were clearing out some of the servants' bedrooms at Nostell. Oak is the first to go, and the last to come back.' Which sounds like an adverse comment on some form of social behaviour. 1800 used to be the totally arbitrary date which separated what was 'desirable' from that which was not, but over the last few years, furniture made up to circa 1830 has become more popular. A pair of George IV tea or games tables, bought at Sotheby's in 1983 for £4,200 and then sent to Grosvenor House, which could have adversely affected their price, were resold in March this year for £12,500.

There is to be a sale of 'important English furniture' at Sotheby's on 16 June. This will include a George III serpentine commode 'in the manner of Thomas Chip- pendale'. The estimate for this is £40,000 to £60,000. If the prices have held from earlier this year, Sotheby's might expect nearly twice the top estimate. There are reasons to think that the market is now less enthusiastic (less toulleish'?). Some peo- ple feel that the Gould sale was over-hyped and this may have caused a reaction. Also in the sale is a William and Mary writing cabinet that was owned and used by Sir Christopher Wren (estimate £4,000 to £6,000). I hope it makes more.

As I write I sit in my Habitat chair at my pine table and ponder. 'Ou est le Hepple- white d'antan?' It's not here. There is a table upstairs that looks William IVish (but the `Edwardian Sheraton' writing desk in my daughter's room full of tangled puppets and bits of games might go first, even before the oak.)