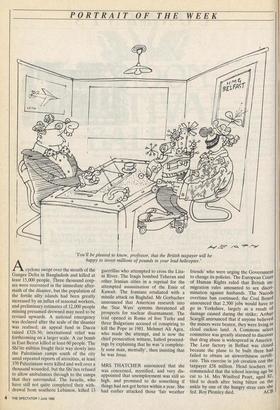 'You'll be pleased to know, professor, that the British taxpayer will be happy to invest millions of pounds in your lead helicopter.' Acyclone swept over the mouth of the Ganges Delta in Bangladesh and killed at least 15,000 people. Three thousand corp- ses were recovered in the immediate after- math of the disaster, but the population of the fertile silty islands had been greatly increased by an influx of seasonal workers, and preliminary estimates of 12,000 people missing presumed drowned may need to be revised upwards. A national emergency was declared after the scale of the disaster was realised; an appeal fund in Dacca raised £326.56; international relief was forthcoming on a larger scale. A car bomb in East Beirut killed at least 60 people. The Shi'ite militias fought their way slowly into the Palestinian camps south of the city amid repeated reports of atrocities, at least 370 Palestinians were killed and well over a thousand wounded, but the Shi'ites refused to allow ambulances through to the camps that they surrounded. The Israelis, who have still not quite completed their with- drawal from southern Lebanon, killed 13

guerrillas who attempted to cross the Lita- ni River. The Iraqis bombed Teheran and other Iranian cities in a reprisal for the attempted assassination of the Emir of Kuwait. The Iranians retaliated with a missile attack on Baghdad. Mr Gorbachev announced that American research into the 'Star Wars' systems threatened all prospects for nuclear disarmament. The trial opened in Rome of five Turks and three Bulgarians accused of conspiring to kill the Pope in 1981. Mehmet All Agca, who made the attempt, and is now the chief prosecution witness, halted proceed- ings by explaining that he was 'a complete- ly sane man, mentally', then insisting that he was Jesus.

MRS THATCHER announced that she was concerned, mystified, and very dis- appointed that unemployment was still so high, and promised to do something if things had not got better within a year. She had earlier attacked those 'fair weather

friends' who were urging the Government to change its policies. The European Court of Human Rights ruled that British im- migration rules amounted to sex discri- mination against husbands. The Nacods overtime ban continued; the Coal Board announced that 2,500 jobs would have to go in Yorkshire, largely as a result of damage caused during the strike; Arthur Scargill announced that if anyone believed the miners were beaten, they were living in cloud cuckoo land. A Commons select committee was greatly alarmed to discover that drug abuse is widespread in America. The Lear factory in Belfast was closed because the plane to be built there had failed to obtain an airworthiness certifi- cate. This exercise in job creation cost the taxpayer £58 million. Head teachers re- commended that the school leaving age be cut to 14. Mrs Winifred Peart, aged 82, bled to death after being bitten on the ankle by one of the hungry stray cats she