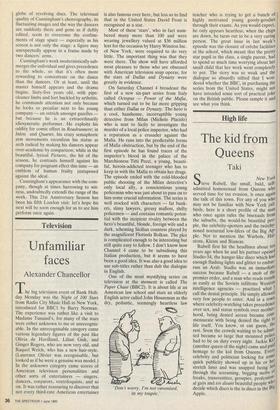 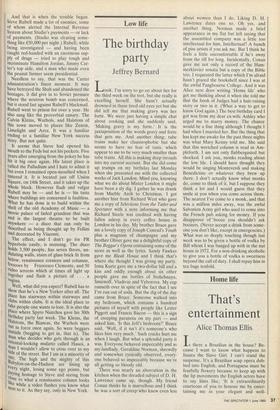 The kid from Queens

teve Rubell, the small, bald, self' admitted homosexual from Queens who served time for tax evasion, is once again the talk of this town. For any of you who may not be familiar with New York jail- birds, here is a short profile of the man who once again rules the bisexuals from the suburbs, the would-be beautiful peo- ple, the celebrity-spotters and the twitchy' nosed nocturnal low-lifers of the Big AP' ple. Not to mention the Warhols, Hal- stons, Kleins and Biancas.

Rubell first hit the headlines about ter; years ago when he and his partner opened Studio-54, the hangar-like disco which had enough flashing lights and glitter to embar• rass an Arab. Studio was an immediate success because Rubell — a snob of the premier order, and a man who reads trends as easily as the Soviets infiltrate Western intelligence agencies — practised what call the denial principle. He simply allowed very few people to enter. And in a town where celebrity-watching takes precedence over sex, and status symbols over mother' hood, being denied access became cool' mensurate with being denied the right to life itself. You know, or can guess, the rest. Soon the crowds waiting to be admit' ted became so large that mounted police had to be on duty every night. Jackie Kv, (another queen of the night) came and pat' homage to the kid from Queens. Eve/ celebrity and politician looking for some quick publicity showed up in his or her stretch limo and was snapped being le", through the screaming, begging mobs 0' freaks, transvestites, groupies, profession- al gays and soi disant beautiful people who decide which disco is the in disco in the Olg Apple.

And that is when the trouble began. Steve Rubell made a lot of enemies, some of whom alerted the Internal Revenue System about Studio's payments — or lack of payments. (Studio was clearing some- thing like £50,000 per night.) Rubell, while being investigated — and having been caught red-handed with an enormous sup- ply of drugs — tried to play tough and incriminate Hamilton Jordan, Jimmy Car- ter's top aide, and a man who made even the peanut farmer seem presidential.

Needless to say, that was the Carter administration's finest moment. It may have betrayed the Shah and abandoned the hostages, it did give in to Soviet pressure where the neutron bomb was concerned, but it stood fast against Rubell's blackmail. Rubell went to prison for over a year. He also sang like the proverbial canary. The Calvin Kleins, Warhols, and Halstons of this town moved to places like Zenon, Limelight and Area. It was a familiar ending to a familiar New York success story. But not quite.

It seems that Steve had opened his mouth to the Feds but not his pockets. Five Years after emerging from the pokey he has hit it big once again. His latest place is called the Palladium and I hate to admit it but even I remained open-mouthed when I entered it. It is located just off Union Square, on 14th Street, and it takes up the whole block. However flash and vulgar Rubel' may be — and he is — his taste where buildings are concerned is faultless. What he has done is to build within the shell of the old Academy of Music — a Movie palace of faded grandeur that was and is the largest theatre to be built anywhere — a disco that can only be described as being thought up by Fellini and decorated by Visconti.

The effect, and I don't go for PR hyperbole easily, is stunning. The disco holds 3,500 people, has seven floors, un- dulating walls, stairs of glass brick lit from below, renaissance cornices and columns, frescoes by Francesco Clemente, and 50 Video screens which at times all light up together and flash a picture of . . . a vagina.

Well, what did you expect? Rubell has to show that he's a New Yorker after all. The Place has stairways within stairways and Clubs within clubs. It is the ideal place to take people one wants to lose. It is also the Place where Spyro Niarchos gave his 30th birthday party last week. The Kleins, the Halstons, the Biancas, the Warhols were

°ut in force once again. So were beggars outside (begging to get in, that is). The man who decides who gets through is an

°nental-looking mulatto called Hauoi, a man I wouldn't allow to cross over to my

side of the street. But I am in a minority of

every night, losing some ego points, but Paying homage to Steve and seeing from like to what a renaissance column looks 'Ike while a video flashes you know what next to it. As they say, only in New York.