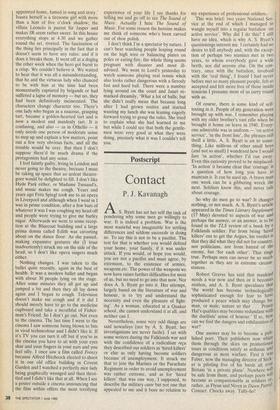 P. J . Kavanagh A. S. Byatt has set her self the task of pondering why some men go willingly to war. It is indeed a problem. War is the most wasteful way imaginable for settling differences and seldom succeeds in doing so. To say this is not to be a pacifist. The test for that is whether you would defend your home, your family, if it was under attack. If you would, or hope you would, you are not a pacifist and must agree, by extension, to the existence of armies, weapons etc. The power of the weapons we now have raises further difficulties for most of us, but no need to go into that now. Nor does A. S. Byatt go into it. Her attempt, largely based on the literature of war and honour, is to `try and understand the necessity and even the pleasure of fight- ing'. As a woman, educated at a Quaker school, she cannot understand it at all, and neither can I.

Nevertheless, some very odd things are said nowadays (not by A. S. Byatt, her investigations are never facile). I sat with some writers during the Falklands war and with the confidence of a radicalism recu they described our soldiers as `hired killers' or else as only having become soldiers because of unemployment. It struck me that to join the Marines or the Parachute Regiment in order to avoid unemployment was rather extreme, and as for 'hired killers' that was one way, I supposed, to describe the military caste but not one that appealed to me and it bore no relation to

my experience of professional soldiers.

This was brief: two years National Ser- vice at the end of which I managed to wangle myself into a regular battalion `on active service'. Why did I do this? I still have no idea, which is why A. S. Byatt's questionings interest me. I certainly had no desire to kill anybody and, with the excep- tion of perhaps two maniacs met in two years, to whom everybody gave a wide berth, nor did anyone else. On the con- trary, once with the battalion, involved with the 'real thing', I found I had never before met so many pleasant people, felt so accepted and felt more free of those inside tensions I presume most of us carry round with us.

Of course, there is some kind of self- testing in it. People of my generation were brought up with war. I remember playing with my older brother's vast rifle when he brought it home on leave in 1940. Every- one admirable was in uniform — `on active service', `in the front line', the phrases still thrill a little, A. S. Byatt is on to some- thing. Like millions of other small boys (and not so small) I wondered how I would fare 'in action', whether I'd run away. Even this curiosity proved to be misplaced. `In action' it became clear that 'courage' is a question of how long you have to maintain it. It can be used up. A brave man one week can be a gibbering wreck the next. Soldiers know this, and never talk about courage.

So why do men go to war? It changes nothing, or not much. A. S. Byatt's article appeared in the Times Literary Supplement (17 May) devoted to aspects of war and perhaps the answer, or an answer, is to be found in the TLS review of a book by a Falklands soldier. Far from being 'hired killers' out to get the Argies, his verdict is that they did what they did not for country, nor politicians, nor from hatred of the enemy, but `for each other'. That rings true. Perhaps men can never be so much together as they are in extreme circum- stances.

Robert Graves has said that mankind needs a war now and then or it becomes restless, and A. S. Byatt speculates that `the world has become technologicallY sophisticated enough ' for fear to have produced a peace which may change hik man, or male, nature so that . . . Prince Hal's qualities may become redundant with the duellists' sense of honour.' If so, how can we find the dangers and exhilaration of war?

One answer may be to become a pub- lished poet. Their publishers now whizz, them through the skies on promotional tours in conditions surely as arduous and dangerous as most warfare. First it was Faber, now the managing director of Seek- er is piloting five of his bards all over Britain 'in a private plane'. Nowhere wt,I1, be safe from them, and perhaps poets will become as companionable as soldiers or. rather, as Flynn and Niven in Dawn Patrol: Contact. Chocks away. Tally-ho!