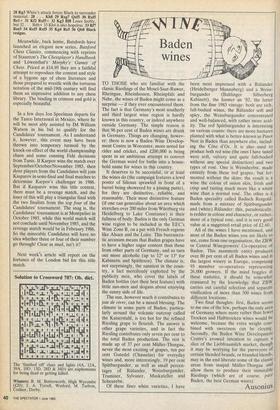 TO THOSE who are familiar with the classic Rieslings of the Mosel-Saar-Ruwer, Rheingau, Rheinhessen, Rheinpfalz and Nahe, the wines of Baden might come as a surprise — if they ever encountered them. The fact is that Germany's most southerly and third largest wine region is hardly known in this country, or indeed anywhere outside Germany. The simple reason is that 96 per cent of Baden wines are drunk in Germany. Things are changing, howev- er: there is now a Baden Wine Develop- ment Centre in Worcester, more noted for cider and cricket, and £200,000 is being spent in an ambitious attempt to convert the German word for baths into a house- hold name for wines in this country.

It deserves to be successful, or at least the wines do (the campaign features a lewd poster of Silenus sprawled in front of a barrel being showered by a pissing putto), for they are distinctive, reliable, and reasonable. Their most distinctive feature (if one can generalise about an area which stretches over 200 miles from Wiirzburg via Heidelberg to Lake Constance) is their fullness of body: Baden is the only German wine region to be included in the EEC's Wine Zone B, on a par with French regions like Alsace and the Loire. This bureaucra- tic arcanum means that Baden grapes have to have a higher sugar content than those from other parts of Germany, and so turn out more alcoholic (up to 12° or 13° for Kabinetts and Spatlesen). The climate is, not surprisingly, the sunniest in the coun- try, a fact mercilessly exploited by the publicity men, who cover the labels of Baden bottles (not their best feature) with little sun-men and slogans about enjoying the sunny side of life.

The sun, however much it contributes to joie de vivre, can be a mixed blessing. The climate in some parts of Baden, particu- larly around the volcanic outcrop called the Kaiserstuhl, is too hot for the refined Riesling grape to flourish. The answer is other grape varieties, and in fact the Riesling contributes only seven per cent to the total Baden production. The rest is made up of 37 per cent Muller-Thurgau, never the most exciting of grapes, ten per cent Gutedel (Chasselas) for everyday wines and, more interestingly, 19 per cent Spatburgunder, as well as small percen-

Of these finer white varieties, I have been most impressed with a Riilander (Heidelberger Mannaberg) and a Weiss-

burgunder (Bahlinger Silberberg Kabinett), the former an '82, the latter from the fine 1983 vintage: both are rich. full-bodied wines, the Riilander soft and spicy, the Weissburgunder concentrated and well-balanced, with rather more acid- ity. The red Spatburgunder is interesting on various counts: there are more hectares planted with what is better-known as Pinot Noir in Baden than anywhere else, includ- ing the Cote d'Or. It is also used to produce both red wine (the ones I have tasted were soft, velvety and quite full-bodied without any special distinction) and two types of rosé. One is Weissherbst, made entirely from these red grapes. but fer- mented without the skins: the result is a wine the colour of onion skin, fresh and crisp and tasting much more like a white wine than a normal rosé. The other is a Baden speciality called Badisch Rotgold, made from a mixture of Spatburgunder and (white) Riilander: this, paradoxically, is redder in colour and character, or rather. more of a typical rosé, and it is very good value at a suggested retail price of £2.60.

All of the wines I have mentioned, and most of the Baden wines you are likely to see, come from one organisation, the ZBW or Central Winegrowers' Co-operative of Baden. This mammoth entity produces over 80 per cent of all Baden wines and is the largest winery in Europe, comprising 93 member co-operatives representing 26,000 growers. If the mind boggles at these statistics, it should be somewhat reassured by the knowledge that ZBW carries out careful selection and separate vinification of more than 500 wines from different locations.

Two final thoughts: first, Baden seems to me one of the few, perhaps the only area of Germany where more rather than fewer Trocken and Halbtrocken wines would he welcome, because the extra weight com- bined with sweetness can be cloying. Secondly, the Baden Wine Development Centre's avowed intention to capture a slice of the Liebfraumilch market, though. it may be worrying for the purveyors 01 certain blended brands, or branded blend, may in the end liberate some of the classic

areas from insipid MUller-Thurgau and allow them to produce their inimitable Rieslings (which are of course, pace Baden, the best German wines).