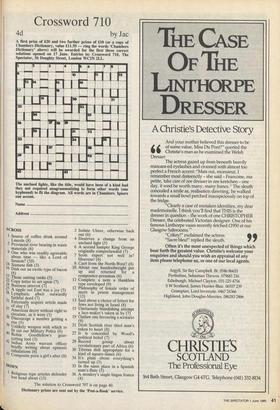 ry' above) will be awarded for the first three correct solutions opened on 17 June. Entries to: Crossword 710, The Spectator, 56 Doughty Street, London WC1N 2LL.

The lights, like the tide, would have been of a kind had

they not required anagrammatising to form other words (one hyphened) to fit the diagram. All words are in Chambers. Ignore one accent.

Name Address ACROSS 1 Source of coffee drink around Lincoln (8)

S Provincial river bearing in waste materials (6) 9 One who was readily agreeable about time — like a Lord of Session? (10)

31 Externally acquire article made of clay (7) 37 American decoy without right to , circulate, as it were (5) 38 Discourage a number getting a

4 Deserves a change from an unclued light (5) 6 A second hamper King George originally comprehended (7) 7 Scots expert not well in? Heavens! (6 th ) 8 Card from the North-West? (4) put up About one hundredweight t up and returned for a compositor-pressman (6) 11 Complete a note a thankless type enveloped (9)m 12 Philosophy of female order of merit in prison management (13)

The solution to Cr Dictionary prizes are sent