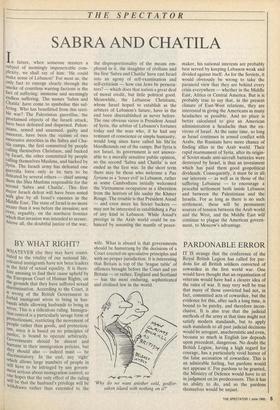 In future, when someone masters a subject of seemingly impenetrable com- plexity, we shall say of him: 'He could make sense.of Lebanon!' For most us, the Only fact to emerge clearly through the smoke of countless warring factions is the fact of suffering: immense and seemingly endless suffering. The names 'Sabra and Chatila' have come to symbolise this suf- fering. Who has benefitted from this terri- ble war? The Palestinian guerrillas, the proclaimed objects of the Israeli attack, have been defeated and dispersed. Palest- inians, armed and unarmed, guilty and innocent, have been the victims of two successive atrocities in the Sabra and Cha- tila camps, the first committed by people calling themselves Christians, and backed by Israel, the other committed by people calling themselves Muslims, and backed by Syria. The Israeli army has defeated one guerrilla force only in its turn to be defeated by several others — chief among them the Shia Muslims responsible for the second 'Sabra and Chatila'. This first major Israeli defeat will have been noted with glee by all Israel's enemies in the Middle East. The state of Israel is no more Secure than it was before the invasion; not even, arguably, on the northern frontier which that invasion was intended to secure. Above all, the doubtful justice of the war, the disproportionality of the means em- ployed in it, the slaughter of civilians and the first 'Sabra and Chatila' have cast Israel into an agony of self-examination and self-criticism — how can Jews be persecu- tors? — which does that nation a great deal of moral credit, but little political good. Meanwhile, the Lebanese Christians, whom Israel hoped to establish as the arbiters of Lebanon's future, have in the end been disestablished as never before. The one obvious victor is President Assad of Syria, the arbiter of Lebanon's fortunes today and the man who, if he had any remnant of conscience or simple humanity, would long since have called his Shi'ite bloodhounds out of the camps. But Syria is not Israel, its government is not answer- able to a morally sensitive public opinion, so the second 'Sabra and Chatila' is not ended as the first was. In the short term there may be those who welcome a Pax Syriana as a 'lesser evil' in Lebanon, rather as some Cambodians initially welcomed the Vietnamese occupation as a liberation from the horrors of life under the Khmer Rouge. The trouble is that President Assad — and even more his Soviet backers may not be interested in establishing a Pax of any kind in Lebanon. While Assad's prestige in the Arab world could be en- hanced by assuming the mantle of peace-

maker, his national interests are probably best served by keeping Lebanon weak and divided against itself. As for the Soviets, it would obviously be wrong to take the paranoid view that they are behind every crisis everywhere — whether in the Middle East, Africa or Central America. But is is probably true to say that, in the present climate of East-West relations, they are interested in giving the Americans as many headaches as possible. And no place is better calculated to give an American administration a headache than the en- virons of Israel. At the same time, so long as Israel continues in armed conflict with Arabs, the Russians have more chance of finding allies in the Arab world. Their rapid rearmament of Syria, after its origin- al Soviet-made anti-aircraft batteries were destroyed by Israel, is thus an investment which has paid them good geopolitical dividends. Consequently, it must be in all our interests — as well as in those of the suffering Lebanese — to encourage a peaceful settlement both inside Lebanon and between the Palestinians and the Israelis. For as long as there is no such settlement, these will be permanent sources of tension between the Arab world and the West, and the Middle East will continue to plague the American govern- ment, to Moscow's advantage.