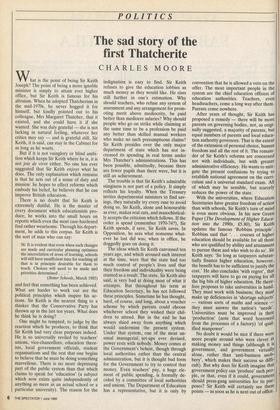 The sad story of the first Thatcherite

What is the point of being Sir Keith Joseph? The point of being a more ignoble minister is simply to attain ever higher office, but Sir Keith is famous for his altruism. When he adopted Thatcherism in the mid-1970s, he never hogged it for himself, but kindly pointed out to his colleague, Mrs Margaret Thatcher, that it existed, and she could have it if she wanted. She was duly grateful — she is not lacking in natural feeling, whatever her critics may say — and is grateful still. Sir Keith, it is said, can stay in the Cabinet for as long as he wants.

But if it is not vainglory or blind ambi- tion which keeps Sir Keith where he is, it is not joie de vivre either. No one has ever suggested that Sir Keith enjoys what he does. The only explanation which remains is that he acts out of a sense of duty and mission: he hopes to effect reforms which embody his belief, he believes that he can improve British education.

There is no doubt that Sir Keith is extremely dutiful. He is the master of every document which educationists pro- duce; he works into the small hours on reports which even the most case-hardened find rather wearisome. Through his depart- ment, he adds to this corpus. Sir Keith is the sort of man who can say: 56. It is evident that even when such changes are made and curricular planning optimises the interrelation of areas of learning, schools will still have insufficient time for teaching all that is in principle desirable for them to teach. Choices will need to be made and priorities determined . . . .'

and feel that something has been achieved. What are harder to work out are the political principles which inspire his ac- tions. Sir Keith is the nearest thing to a thinker that the Conservative Party has thrown up in the last ten years. What does he think he is doing?

One might be tempted, to judge by the reaction which he produces, to think that Sir Keith had very clear purposes indeed. He is so universally reviled by teachers' unions, vice-chancellors, education theor- ists, local government officials, student organisations and the rest that one begins to believe that he must be doing something marvellous. There is no more depressing part of the public system than that which claims to speak for 'education' (a subject which now exists quite independently of anything so mere as an actual school or a particular university). The reason for the indignation is easy to find. Sir Keith refuses to give the education lobbies as much money as they would like. He rises still further in one's estimation. Why should teachers, who refuse any system of assessment and any arrangement for prom- oting merit above mediocrity, be paid better than mediocre salaries? Why should people who go on strike while claiming at the same time to be a profession be paid any better than skilled manual workers who make no such presumptuous claims? Sir Keith presides over the only major department of state which has not in- creased its spending in real terms under Mrs Thatcher's administrations. This has been possible, admittedly, because there are fewer pupils than there were, but it is still an achievement.

The trouble is that Sir Keith's admirable stinginess is not part of a policy. It simply reflects his loyalty. When the Treasury invites departmental ministers to find sav- ings, they naturally try every ruse to avoid doing so. Sir Keith, alone and honourable as ever, makes real cuts, and masochistical- ly accepts the criticism which follows. If the order is spend (remember 1970-74?), Sir Keith spends, if save, Sir Keith saves. In Opposition, he sees what nonsense what- ever he last did was; when in office, he doggedly goes on doing it.

The ideas which Sir Keith canvassed ten years ago, and which aroused such interest at the time, were that the state had too much control of people's lives and that their freedom and individuality were being stunted as a result. The state, Sir Keith also said, is very bad at doing most of what it attempts. But throughout his term as Education Secretary, he has not followed these principles. Sometime he has thought, hard, of course, and long, about a voucher scheme by which parents could choose whichever school they wished their chil- dren to attend. But in the end he has always shied away from anything which would undermine the present system. Under that system, one of the most un- usual managerial set-ups ever devised, power rests with nobody. Money comes at the Government's behest, though through local authorities rather than the central administration, but it is thought bad form for the Government to try to control that money. Even teachers' pay, a huge ele- ment of public spending, is formally de- cided by a committee of local authorities and unions. The Department of Education has a representative, but it is only by convention that he is allowed a veto on the offer. The most important people in the system are the chief education officers of education authorities. Teachers, even headteachers, come a long way after them. Parents come nowhere.

After years of thought, Sir Keith has proposed a remedy — there will be more, parents on governing bodies, not, as origi- nally suggested, a majority of parents, but equal numbers of parents and local educa- tion authority governors. That is the extent of the extension of personal choice, human freedom and all the rest of it. The remain- der of Sir Keith's reforms are concerned not with individuals, but with greater administrative efficiency. He wants to miti- gate the present confusions by trying to establish national agreement on the curri- culum and a universal standard exam. All of which may be sensible, but scarcely reduces the power of the state.

With the universities, where Education Secretaries have greater freedom of action than with schools, Sir Keith's turn of mind is even more obvious. In his new Green Paper (The Development of Higher Educa- tion into the 1990s, £5.80), Sir Keith updates the famous 'Robbins principle'. Robbins said that `. . . courses of higher education should be available for all those who are qualified by ability and attainment to pursue them and who wish to do so'. Sir Keith says: 'So long as taxpayers substan- tially finance higher education, however, the benefit has to be sufficient to justify the cost.' He also concludes 'with regret', that taxpayers will have to go on paying for all the big bits of higher education. He there- fore proposes to take universities in hand. They must work with business; they must make up deficiencies in 'shortage subjects, — various sorts of maths and science — they must answer the nation's `needs'. Universities must be improved in their `production' (note that word borrowed from the processes of a factory) 'of qual- ified manpower'.

No doubt it would be nice if there were more people around who were clever at making money and things (although it is government, and government virtually alone, rather than 'anti-business snob- bery', which makes their success so diffi- cult). But why does Sir Keith imagine that government policy can 'produce' such peo- ple, or that, even if it could, government should press-gang universities for its pur- poses? Sir Keith will certainly see these points — as soon as he is next out of office.