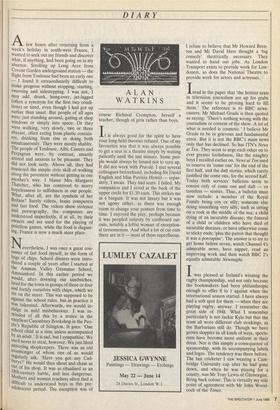 Page 7, 1 June 1985 — A few hours after returning from a week's holiday in south-west
Close

France, I wanted to seek out my friends and discover what, if anything, had been going on in my absence. Strolling up Long Acre from Covent Garden underground station — the flight from Toulouse had been an early one — I found it extraordinarily difficult to make progress without stopping, starting, swerving and sidestepping. I was not, I may add, drunk, hung-over, jet-lagged (often a synonym for the first two condi- tions) or tired, even though I had got up earlier than usual. But people of all ages were just standing around, gazing at shop windows or simply into space. Or they were walking, very slowly, two or three abreast, often eating from plastic contain- ers, drinking from tins or doing both simultaneously. They were mostly shabby. The people of Toulouse, Albi, Castres and Perpignan were, by contrast, smartly attired and anxious to be pleasant. They did not look surly. Above all, they had mastered the simple civic skill of walking along the pavement without getting in one another's way. I blame Mrs Margaret Thatcher, who has contrived to marry hopelessness to selfishness in our people. What, after all, are the symbols of her Britain? Surely videos, home computers and fast food. The videos show violence and pornography, the computers are understood imperfectly, if at all, by their owners and are used for the playing of pointless games, while the food is disgust- ing. France is now a much nicer place.

Nevertheless, I was once a great con- sumer of fast food myself, in the form of bags of chips. School dinners were intro- duced a couple of years after I started at the Amman Valley Grammar School, Ammanford. In this earlier period we would, after downing our sandwiches, head for the town in groups of three or four and fortify ourselves with chips, which we ate on the street. This was supposed to be against the school rules, but in practice it was tolerated. Afterwards, we would in- dulge in mild misbehaviour. I was re- minded of all this by a notice in the excellent Canonbury Bookshop in the Peo- Pie's Republic of Islington. It goes: 'One school child at a time unless accompanied by an adult.' It is sad, but I sympathise. We used never to steal, however. We just liked annoying shopkeepers. There was an old ironmonger of whom one of us would regularly ask: 'Have you got any Cad- burys?' He would then shout and chase us out of his shop. It was as ritualised as an 18th-century battle, and less dangerous. Mothers and women teachers often find it difficult to understand boys in this pre- adolescent period. The exception was of

course Richmal Crompton, herself a teacher, though of girls rather than boys.

It is always good for the spirit to have your long-held theories refuted. One of my favourites was that it was always possible to get a seat in a theatre simply by waiting patiently until the last minute. Some peo- ple would always be bound not to turn up. It did not work with Pravda. I met several colleagues beforehand, including Sir David English and Miss Patricia Hewitt — separ- ately, I mean. They had seats. I failed. My companion and I stood at the back of the upper circle for £1.50 each. This strikes me as a bargain. It was not luxury but it was not agony either, as there was enough room to change your posture from time to time. I enjoyed the play, perhaps because it was peopled entirely by cardboard cut- outs, notably a leftist woman of exception- al tiresomeness. And what a lot of cut-outs there are in it — most of them superfluous.

I refuse to believe that Mr Howard Bren- ton and Mr David Hare thought a 'big comedy' theatrically necessary. They wanted to hand out jobs. As London Transport exists to provide work for Lon- doners, so does the National Theatre to provide work for actors and actresses.

Iread in the paper that 'the hottest seats

them.' The reference is to BBC news- casters. Mr Michael Grade is then quoted as saying: 'There's nothing wrong with the journalism or content of the show. A lot of what is needed is cosmetic.' I believe Mr Grade to be in grievous and fundamental error. But it is not the BBC's main news only that has declined. So has ITN's News at Ten. They seem to urge each other on to ever greater foolishness, like the naughty boys I recalled earlier on. News at Ten used to reserve its 'come ons' for the end of the first half, and the daft stories, which rarely justified the come ons, for the second half. Today both services' bulletins seem to consist only of come ons and daft — or tasteless — stories. Thus, a bulletin must now include: a member of the Royal Family being coy or silly; someone else doing something very silly, such as sitting on a rock in the middle of the sea; a child dying of an incurable disease; the funeral of a child or children who have died of incurable diseases, or have otherwise come to sticky ends; 'plus the parrot that thought it was a porcupine'. The answer is to try to get home before seven, watch Channel 4's admirable news, have supper, read an improving work and then watch BBC 2's equally admirable Newsnight.

Iwas pleased at Ireland's winning the rugby championship, and not only because

the bookmakers had been philanthropic enough to offer 8 to 1 against when the international season started. I have always

had a soft spot for them — when they are playing rugby, anyway. I remember the great side of 1948. What I remember particularly is not Jackie Kyle but that the team all wore different club stockings, as the Barbarians still do. Though we have grown sloppier in all kinds of ways, sports- men have become more uniform, in their dress. Nor is this simply a consequence of sponsorship, with its accompanying labels and logos. The tendency was there before. The last cricketer I saw wearing a Cam- bridge University cap after he had gone down, and when he was playing for a county, was Mr Tony Lewis of Glamorgan. Bring back colour. This is virtually my sole point of agreement with Mr John Wood- cock of the Times.