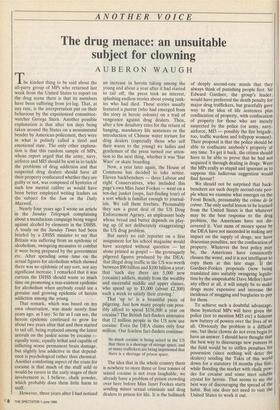 The drug menace: an unsuitable subject for clowning

The kindest thing to be said about the all-party group of MPs who returned last week from the United States to report on the drug scene there is that its members have been suffering from jet-lag. That, at any rate, is the interpretation put on their behaviour by the experienced committee- watcher George Stern. Another possible explanation is that after ten days being taken around the States on a monumental bender by American policemen, they were in what is politely called a tired and emotional state. The only other explana- tion is that this random sample of MPs, whose report urged that the army, navy, airforce and MI5 should be sent in to tackle the problems of drug addiction and that suspected drug dealers should have all their property confiscated whether they are guilty or not, was composed of hysterics of such low mental calibre as would have been better employed writing leaders on the subject for the Sun or the Daily Maxwell.

Nearly four years ago I wrote an article in the Sunday Telegraph complaining about a mendacious campaign being waged against alcohol by elements in the DHSS. A toady on the Sunday Times had been briefed by a DHSS minister to say that Britain was suffering from an epidemic of alcoholism, swingeing measures to combat it were being prepared by the government etc. After spending some time on the actual figures for alcoholism which showed there was no epidemic of any sort, nor any significant increase, I remarked that it was curious the DHSS should waste so much time on promoting a non-existent epidemic for alcoholism when anybody could see a genuine and growing epidemic of heroin addiction among the young.

That remark, which was based on my own observation, was made nearly four years ago, as I say. So far as I can see, the heroin epidemic continued to grow for about two years after that and then started to tail off, being replaced among the latest arrivals on the junkie scene by cocaine equally toxic, equally lethal and capable of inflicting worse permanent brain damage, but slightly less addictive in that depend- ence is psychological rather than chemical.

Another comforting aspect of the craze for cocaine is that much of the stuff sold to would-be ravers in the early stages of their involvement is, I believe, chalk powder, which probably does them little harm to sniff.

However, three years after I had noticed an increase in heroin taking among the young and about a year after it had started to tail off, the press took an interest, splashing endless stories about young junk- ies who had died. These stories usually featured a parent (who had emerged from the story in heroic colours) on a trail of vengeance against drug dealers. Then, after a few desultory cries for the return of hanging, mandatory life sentences or the introduction of Chinese water torture for drug dealers (especially those who sell their wares to the young) we ladies and gentlemen of the press turned our atten- tion to the next thing, whether it was 'Star Wars' or skate boarding.

Now, a year later again, the House of Commons has decided to take notice. Eleven backbenchers — three Labour and eight Conservatives, who included this page's own Miss Janet Fookes — went on a ten-day junket (oops, fact-finding tour) of a sort which is familiar enough to journal- ists. We call them freebies. Presumably they saw a great deal of the US Drug Enforcement Agency, an unpleasant body whose bread and butter depends on play- ing up (if not deliberately exaggerating) the US drug problem.

But surely no cub reporter on a first assignment for his school magazine would have accepted without question — let alone printed as gospel — the grotesquely pilgered figures produced by the DEA: that illegal drug traffic in the US was worth between $90 billion and $100 billion a year; that 'each day there are 5,000 new (cocaine) addicts, mainly from the wealthy and successful middle and upper classes, who spend up to $3,000 (about £2,300) each a week to satisfy their craving.'

That 'up to' is a beautiful piece of pilgering. Just how many people can poss- ibly afford to spend $156,000 a year on cocaine? The British fact-finders announce that 12 million people in the US now use cocaine. Even the DEA claims only four million. Our fearless fact-finders continue:

The idea that in the whole country there is nowhere to store three or four tonnes of seized cocaine is not even laughable; we already have a problem of prison crowding over here before Miss Janet Fookes starts sending minor sexual criminals and drug dealers to prison for life. It is the hallmark of deeply second-rate minds that they always think of punishing people first. Sir Edward Gardner, the group's leader, would have preferred the death penalty for major drug traffickers, but gracefully gave way to the idea of life sentences plus confiscation of property, with confiscation of property for those who are merely suspected by the police (or army, navy, airforce, MI5 — possibly the fire brigade, too, traffic wardens and lollypop women). Their proposal is that the police should be able to confiscate anybody's property at any time. To get it back, the citizen should have to be able to prove that he had not acquired it through dealing in drugs. Were the MPs really so stupid and ignorant as to suppose this ludicrous suggestion would find favour?

We should not be surprised that back- benchers are such deeply second-rate peo- ple when we examine what emerges on the Front Bench, presumably the creme de la creme. The only useful lesson to be learned from the United States is that whatever may be the best response to the drug problem, the Americans have not dis- covered it. Vast sums of money spent by the DEA have not succeeded in making any impact on the supply of drugs, nor have draconian penalties, nor the confiscation of property. Whatever the best policy may be, the Americans have consistently chosen the worst, and it is not intelligent to copy them at this late stage. If the Gardner-Fookes proposals (now being translated into suitably swingeing legisla- tion by the unspeakable Dave Mellor) have any effect at all, it will simply be to make drugs more' expensive and increase the incidence of mugging and burglaries to pay for them.

To achieve such a doubtful advantage, these hysterical MPs will have given the police (not to mention MI5 etc) a hideous new battery of powers over the lives of us all. Obviously the problem is a difficult one, but these clowns do not even begin to have an answer. I should have thought that the best way to discourage new punters in the field would be to stiffen penalties for possession (since nothing will deter the dealers) sending the Takis of this world

down for a statutory 18 months plus fine, while flooding the market with chalk pow- der for cocaine and some inert soluble

crystal for heroin. That seems to me the best way of discouraging the spread of the habit. But one does not need to visit the United States to work it out.