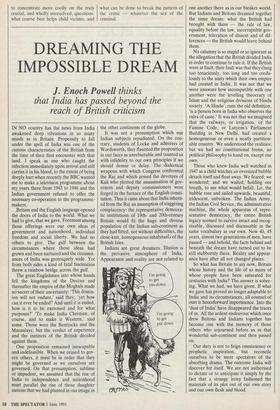 that India has passed beyond the reach of British criticism

IN NO country has the news from India awakened deep vibrations in so many minds as in Britain. Propensity to fall under the spell of India was one of the curious characteristics of the British from the time of their first encounter with that land. I speak as one who caught the infection immediately upon arrival and still carries it in his blood, to the extent of being deeply hurt when recently the BBC wanted me to make a television programme about my years there from 1943 to 1946 and the Indian government refused to offer the necessary co-operation to the programme- makers.

Britain and the English language opened the doors of India to the world. What we had to give, that we gave. Foremost among those offerings were our own ideas of government and nationhood, individual freedom and social liberty. We had no others to give. The gulf between the circumstances where those ideas had grown and been nurtured and the circumst- ances of India was grotesquely wide. Yet from both sides a kind of fatal fascination threw a rainbow bridge across the gulf.

The great Englishmen into whose hands fell the kingdoms of the Deccan and thereafter the empire of the Moghuls made no secret of their uncertainty: 'This domin- ion will not endure,' said they; 'yet how can it ever be ended? And until it is ended, how is it to be exercised and for what purposes?' To make India Christian, of course, and to make it Western,' said some. Those were the Bentincks and the Macaulays; but the verdict of experience and the instincts of the British decided against them.

One proposition remained inescapable and indefeasible. When we ceased to gov- ern others, it must be in order that they might be governed as we ourselves are governed. On that presumption, sublime or impudent, we assumed that the rise of India to independence and nationhood must parallel the rise of those daughter nations that we had planted in our image in the other continents of the globe.

It was not a presumption which our Indian subjects repudiated. On the con- trary, students of Locke and admirers of Wordsworth, they flaunted the proposition in our faces as unrebuttable and taunted us with infidelity to our own principles if we should demur or delay. The dialectical weapons with which Congress confronted the Raj and which armed the devotees of Kali who plotted the assassination of gov- ernors and deputy commissioners were forged in the furnace of the English consti- tution. Thus it came about that India inherit- ed from the Raj an assumption of staggering complacency: the representative democra- tic institutions of 19th- and 20th-century Britain would fit the huge and diverse population of the Indian sub-continent as they had fitted, not without difficulties, the close-knit, homogeneous inhabitants of the British Isles.

Indians are great dreamers. Illusion is the pervasive atmosphere of India. Appearance and reality are not related to one another there as in our bleaker world. But Indians and Britons dreamed together the same dream: what the British had brought with them — the rule of law, equality before the law, incorruptible gov- ernment, toleration of dissent and of dif- ferences — the British would leave behind them.

No calumny is so stupid or so ignorant as the allegation that the British divided India in order to continue to rule it. If the British were at fault, their fault was that they clung too tenaciously, too long and too credu- lously to the unity which their own empire had created in India. It was not that we were unaware how incompatible with one another were the levelling theocracy of Islam and the religious divisions of Hindu society. 'A Hindu', runs the old definition, `is a person born in India who observes the rules of caste.' It was not that we imagined that the railways, or irrigation, or the Famine Code, or Lutyens's Parliament Building in New Delhi, had created a homogeneous or even a neatly partition- able country. We understood the realities; but we had no constitutional forms, no political philosophy to hand on, except our own.

Those who knew India well watched in 1947 as a child watches an oversized bubble detach itself and float away. We feared; we wondered; and we waited, holding our breath, to see what would befall. Lo, the bubble rose and sailed upwards, beautiful, iridescent, unbroken. The Indian Army, the Indian Civil Service, the administrative machine, the whole apparatus of repre- sentative democracy, the entire British legacy seemed to survive intact and recog- nisable, discussed and discussable in the same vocabulary as our own. Now 40, 45 years, almost two generations of men, have passed — and behold, the facts behind and beneath the dream have turned out to be still stubbornly there. Reality and appear- ance have after all not changed places.

So what has Britain to say now, Britain whose history and the life of so many of whose people have been saturated for centuries with India? The answer is sober- ing. What we had, we have given. If what we gave has proved no longer adaptable to India and its circumstances, all counsel of ours is henceforward impertinence. Into the `dust of India' have disappeared the traces of us. All the ardent endeavour which once drew Britons and Indians together has become one with the memory of those others who sojourned before us in that wonderful sub-continent and then passed on.

Our duty is not to feign omniscience or prophetic inspiration, but reconcile ourselves to be mere spectators of the absorbing drama. The outcome India will discover for itself. We are not authorised to dictate or to anticipate it simply by the fact that a strange irony fashioned the materials of its plot out of our own story and our own flesh and blood.