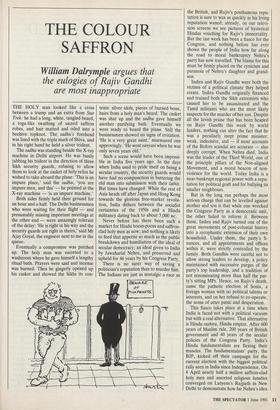 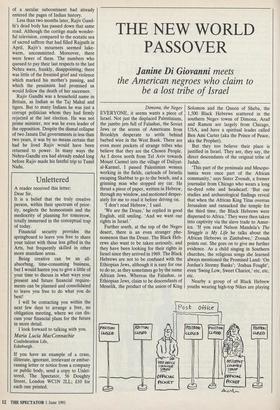 the eulogies of Rajiv Gandhi are most inappropriate

THE HOLY man looked like a cross between a tramp and an extra from Star Trek: he had a long, white, tangled beard, a toga-like swathing of sacred saffron robes, and hair matted and oiled into a beehive topknot. The sadhu's forehead was lined with the triple mark of Shiva, and in his right hand he held a silver trident.

The sadhu was standing beside the X-ray machine in Delhi airport. He was busily jabbing his trident in the direction of three Sikh security guards, refusing to allow them to look at the casket of holy relics he wished to take aboard the plane: 'This is an impure place,' said the sadhu, 'you are impure men, and this' — he pointed at the X-ray machine — 'is an impure machine.'

Both sides firmly held their ground for an hour and a half. The Delhi businessmen who were waiting for their flight — and presumably missing important meetings at the other end — were amazingly tolerant of the delay: 'He is right in his way and the security guards are right in theirs,' said Mr Ajay Goyal, the engineer next to me in the queue.

Eventually a compromise was patched up. The holy man was escorted to a washroom where he gave himself a lengthy ritual bath. Prayers were said and incense was burned. Then he gingerly opened up his casket and showed the Sikhs its con-

tents: silver idols, pieces of burned bone, hairs from a holy man's beard. The casket was shut up and the sadhu gave himself another purifying bath. Eventually we were ready to board the plane. Still the businessmen showed no signs of irritation. 'He is a very great saint,' murmured one approvingly. 'He went sanyasi when he was only seven years old.'

Such a scene would have been impossi- ble in India five years ago. In the days when India used to pride itself on being a secular country, the security guards would have had no compunction in battering the old man into submission with their lath is . But times have changed. While the rest of Asia heads off after Japan and Hong Kong towards the glorious free-market revolu- tion, India dithers between the socialist certainties of the 1950s and a Hindu militancy dating back to about 3,000 sc.

Never before has there been such a market for Hindu hocus-pocus and saffron- clad holy men as now; and nothing is likely to feed that appetite so much as the public breakdown and humiliation of the ideal of secular democracy; an ideal given to India by Jawaharlal Nehru, and preserved and upheld for 46 years by his Congress Party.

There is no surer way of saving a politician's reputation than to murder him. The Indians are just as nostalgic a race as the British, and Rajiv's posthumous repu- tation is sure to wax as quickly as his living reputation waned; already, on our televi- sion screens we see pictures of hysterical Hindus vouching for Rajiv's immortality. But the last week has been a fiasco for the Congress, and nothing before has ever shown the people of India how far along the road to moral bankruptcy Nehru's party has now travelled. The blame for this must be firmly placed on the cynicism and paranoia of Nehru's daughter and grand- son.

Indira and Rajiv Gandhi were both the victims of a political climate they helped create. Indira Gandhi originally financed and trained both the Sikh extremists who caused her to be assassinated and the Tamil militants who are the most likely suspects for the murder of her son. Despite all the lavish praise that has been heaped on Rajiv Gandhi this week by world leaders, nothing can alter the, fact that he was a peculiarly inept prime minister: weak, indecisive, and — if most accounts of the Bofors scandal are accurate — also deeply corrupt. When Nehru died, India was the leader of the Third World, one of the principle pillars of the Non-aligned Movement, and a moral beacon of non- violence for the world. Today India is a near-bankrupt regional power with a repu- tation for political graft and for bullying its smaller neighbours.

But in the long run perhaps the most serious charge that can be levelled against mother and son is that while one wrecked the Congress Party as a democratic unit, the other failed to reform it. Between them, Indira and Rajiv turned one of the great movements of post-colonial history into a sycophantic extension of their own household. Under them, the party's fi- nances, and all appointments and offices within it, were strictly controlled by the family. Both Gandhis were careful not to allow strong leaders to develop, a policy maintained with successive purges of the party's top leadership, and a tradition of not renominating more than half the par- ty's sitting MPs. Hence, on Rajiv's death, came the pathetic election of Sonia, a foreign woman with no political talents or interests, and on her refusal to co-operate, the sense of utter panic and desperation.

This fiasco takes place at a time when India is faced not with a political vacuum but with a real alternative. That alternative is Hindu rashtra, Hindu empire. After 600 years of Muslim rule, 200 years of British government and 40 years of the secular policies of the Congress Party, India's Hindu fundamentalists are flexing their muscles. The fundamentalists' party, the BJP, kicked off their campaign for the current election with the biggest political rally seen in India since Independence. On 4 April nearly half a million saffron-clad holy men and assorted religious lunatics converged on Lutyens's Rajpath in New Delhi to demonstrate how far Nehru's idea of a secular subcontinent had already entered the pages of Indian history.

Less than two months later, Rajiv Gand- hi's dead body has passed down that same road. Although the cortege made wonder- ful television, compared to the ecstatic sea of sacred saffron that had filled Rajpath in April, Rajiv's mourners seemed luke- warm, uncommitted. Moreover, there were fewer of them. The numbers who queued to pay their last respects to the last Nehru were, frankly, disappointing; there was little of the frenzied grief and violence which marked his mother's passing, and which the pessimists had promised us would follow the death of her successor.

Rajiv Gandhi was a household name in Britain, as Indian as the Taj Mahal and tigers. But to many Indians he was just a corrupt politician whom they had firmly rejected at the last election. He was not prime minister, nor was he even leader of the opposition. Despite the dismal collapse of two Janata Dal governments in less than two years, it was by no means certain that had he lived Rajiv would have been returned to power. In many ways the Nehru-Gandhi era had already ended long before Rajiv made his fateful trip to Tamil Nadu.