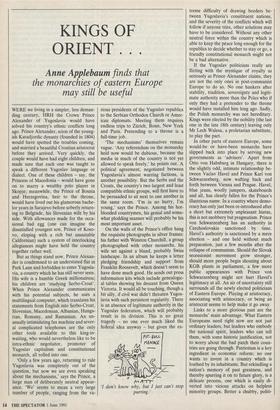 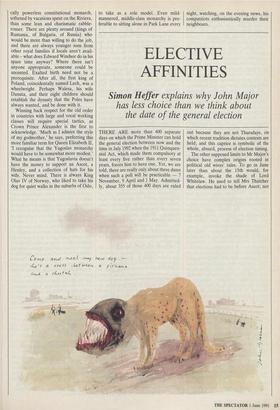 the monarchies of eastern Europe may still be useful

WERE we living in a simpler, less deman- ding century, HRH the Crown Prince Alexander of Yugoslavia would have solved his country's ethnic conflicts long ago. Prince Alexander, scion of the young- ish Karadjordic dynasty (founded in 1804) would have spotted the troubles coming, and married a beautiful Croatian aristocrat before they arrived. Very quickly, the couple would have had eight children, and made sure that each one was taught to speak a different Yugoslav language or dialect. One of these children — say, the Princess of Macedonia — would have gone on to marry a wealthy polo player in Skopje; meanwhile, the Prince of Bosnia and Herzegovina, heir to the throne, would have lived out his glamorous bache- lor years in Sarajevo before soberly return- ing to Belgrade, his Slovenian wife by his side. With allowances made for the occa- sional bad egg (one can imagine the dissatisfied youngest son, Prince of Koso- vo, eloping with a rich but unsuitable Californian) such a system of interlocking allegiances might have held the country together rather well.

But as things stand now, Prince Alexan- der is condemned to an understated flat in Park Lane and forbidden to enter Yugosla- via, a country which he has still never seen. His wife is a humble Greek millionairess; his children are 'studying Serbo-Croat'. When Prince Alexander communicates with his potential subjects, he uses a multilingual computer, which translates his statements from English into Serbo-Croat, Slovenian, Macedonian, Albanian, Hunga- rian, Romany, and Rumanian. An un- usually intimidating fax machine and sever- al complicated telephones are the only other tools available to this king-in- waiting, who would nevertheless like to be intra-ethnic negotiator, promoter of Yugoslav capitalism and constitutional monarch, all rolled into one.

`Only a few years ago, returning to rule Yugoslavia was completely out of the question, but now we are even speaking about the mechanisms,' says the Prince, a large man of deliberately neutral appear- ance. 'We' seems to mean a very large number of people, ranging from the va- rious presidents of the Yugoslav republics to the Serbian Orthodox Church or Amer- ican diplomats. Meeting them requires endless trips to Zurich, Bonn, New York and Paris. Pretending to a throne is a full-time job.

`The mechanisms' themselves remain vague. 'Any referendum on the monarchy held now would be dubious, because the media in much of the country is not yet allowed to speak freely,' he points out. A political agreement, negotiated between Yugoslavia's almost warring factions, is another possibility. But the Serbs and the Croats, the country's two largest and least compatible ethnic groups, will first have to be persuaded to sit next to one another in the same room. 'I'm in no hurry, I'm young,' says the Prince. Among his hot- blooded countrymen, his genial and some- what plodding manner will probably be his most important asset.

On the walls of the Prince's office hang the requisite photographs in silver frames: his father with Winston Churchill, a group photographed with other monarchs, his wife set against a bland, probably Swiss landscape. In an album he keeps a letter pledging friendship and support from Franklin Roosevelt, which doesn't seem to have done much good. He sends out press information kits which include genealogic- al tables showing his descent from Queen Victoria. It would all be touching, though a bit silly, if civil war didn't threaten Yugos- lavia with such persistent regularity. There is an absence of legitimate authority in the Yugoslav federation, which will probably result in its division. This is no great tragedy — no one ever much liked the federal idea anyway — but given the ex- 1 don't know why, but I just can't stop purring.' • treme difficulty of drawing borders be- tween Yugoslavia's consitituent nations, and the severity of the conflicts which will follow if anyone tries, other solutions may have to be considered. Without any other neutral force within the country which is able to keep the peace long enough for the republics to decide whether to stay or go, a friendly constitutional monarch might not be a bad alternative.

If the Yugoslav politicians really are flirting with the mystique of royalty as seriously as Prince Alexander claims, they are not the only ones in post-communist Europe to do so. No one hankers after stability, tradition, sovereignty and legiti- mate authority more than the Poles who if only they had a pretender to the throne would have installed him long ago. Sadly, the Polish monarchy was not hereditary. Kings were elected by the nobility (the last one in the late 18th century) leaving only Mr Lech Walesa, a proletarian substitute, to play the part.

In other parts of eastern Europe, some would-be or have-been monarchs have slipped back into place by serving new governments as 'advisers'. Apart from Otto von Habsburg in Hungary, there is the slightly odd, intimate relationship be- tween Vaclav Havel and Prince Karl von Schwarzenberg, now wafting back and forth between Vienna and Prague. Havel, blue jeans, woolly jumpers, skateboards and all, has clearly fallen for the Prince's illustrious name. In a country where demo- cracy has only just been re-introduced after a short but extremely unpleasant hiatus, this is not snobbery but pragmatism. Prince von Schwarzenberg has an authority in Czechoslovakia sanctioned by time. Havel's authority is sanctioned by a mere election — and one held without much preparation, just a few months after the collapse of communism. Should the Slovak secessionist movement grow stronger, should more people begin shouting about KGB plants in parliament, a few more public appearances with Prince von Schwarzenberg might not hurt Havel's legitimacy at all. An air of uncertainty still surrounds all the newly elected politicians of Eastern Europe. Playing at aristocracy, associating with aristocracy, or being an aristocrat seems to help make it go away.

Links to a more glorious past are the monarchs' main advantage. What Eastern Europeans need right now are not just ordinary leaders, but leaders who embody the national spirit, leaders who can tell them, with some historic justification, not to worry about the bad patch their coun- tries are going through. Patriotism is a key ingredient in economic reform; no one wants to invest in a country which is loathed by its inhabitants. But rekindling a nation's memory of past greatness, and thereby spurring it on to future glory, is a delicate process, one which is easily di- verted into vicious attacks on helpless minority groups. Better a chubby, politi- cally powerless constitutional monarch, softened by vacations spent on the Riviera, than some lean and charismatic rabble- rouser. There are plenty around (kings of Rumania, of Bulgaria, of Russia) who would be more than willing to do the job, and there are always younger sons from other royal families if locals aren't avail- able – what does Edward Windsor do in his spare time anyway? Where there isn't anyone appropriate, someone could be anointed. Exalted birth need not be a prerequisite. After all, the first king of Poland, coincidentally named Lech, was a wheelwright. Perhaps Walesa, his wife Danuta, and their eight children should establish the dynasty that the Poles have always wanted, and be done with it.

Winning back respect for the old order in countries with large and vocal working classes will require special tactics, as Crown Prince Alexander is the first to acknowledge. 'Much as I admire the style of my godmother,' he says, preferring this more familiar term for Queen Elizabeth II, 'I recognise that the Yugoslav monarchy would have to be somewhat more modest.' What he means is that Yugoslavia doesn't have the money to support an Ascot, a Henley, and a collection of hats for his wife. Never mind. There is always King Olav IV of Norway, who liked to take his dog for quiet walks in the suburbs of Oslo,

to take as a role model. Even mild- mannered, middle-class monarchy is pre- ferable to sitting alone in Park Lane every

night, watching, on the evening news, his compatriots enthusiastically murder their neighbours.