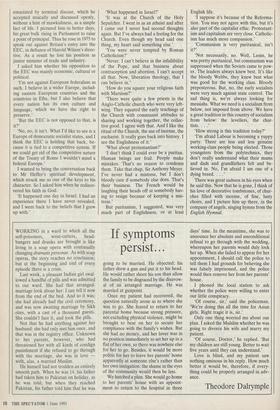 WORKING in a ward to which all the self-poisoners, wrist-cutters, head- bangers and drunks are brought is like living in a soap opera with continually changing dramatis personae. As with soap operas, the story reaches no conclusion; but at the beginning and end of every episode there is a crisis.

Last week, a pleasant Indian girl swal- lowed a handful of pills and was admitted to our ward. She had that arranged- marriage look about her: I can tell it now from the end of the bed. And so it was; she had already had the civil ceremony, and was now awaiting marriage by Sikh rites, with a cast of a thousand guests. She couldn't face it, and took the pills.

Not that he had anything against her husband: she had only met him once, and that was in the registry office. Unknown to her parents, however, who had threatened her with all kinds of condign punishment if she refused to go through with the marriage, she was in love with, alas, a married Muslim.

He himself had not trodden an entirely smooth path. When he was 14, his father had taken him to Pakistan on holiday, as he was told; but when they reached Pakistan, his father told him that he was

going to be married. He objected; his father drew a gun and put it to his head. He would rather shoot his son than allow the family to be disgraced by the disavow- al of an arranged marriage. He was married at gunpoint.

Once my patient had recovered, the question naturally arose as to where she was to go. She feared to return to her parental home because strong pressure, not excluding physical violence, might be brought to bear on her to secure her compliance with the family's wishes. But she had no money, and her lover was in no position immediately to set her up in a flat of her own, so there was nowhere else for her to go. Besides, it would be more politic for her to leave her parents' home apparently at someone else's rather than her own instigation: the shame in the eyes of the community would then be less.

We hatched a plan. She would go home to her parents' house with an appoint-. ment to return to the hospital in three days' time. In the meantime, she was to announce her absolute and unconditional refusal to go through with the wedding, whereupon her parents would duly lock her up. When she failed to appear for her appointment, I should call the police to tell them I had grounds for believing she was falsely imprisoned, and the police would then remove her from her parents' house.

I phoned the local station to ask whether the police were willing to enter our little conspiracy.

'Of course, sir,' said the policeman. 'We're doing this all the time for Asian girls. Right tragic it is, sir.'

Only one thing worried me about our plan. I asked the Mulslim whether he was going to divorce his wife and marry my patient.

'Of course, Doctor,' he replied. 'But my children are still young. Better to wait five years until they can understand.'

Love is blind, and my patient saw nothing ominous in his reply. How much better it would be, therefore, if every- thing could be properly arranged in adv- ance.