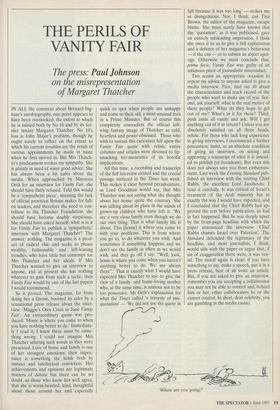 THE PERILS OF VANITY FAIR

on the misrepresentation of Margaret Thatcher The press: Paul Johnson

IN ALL the comment about Bernard Ing- ham's autobiography, one point appears to have been overlooked: the extent to which he is missed both by No 10 and by its for- mer tenant Margaret Thatcher. No 10's loss is John Major's problem, though he ought surely to reflect on the extent to which his current troubles are the result of various appointments he made in haste when he first moved in. But Mrs Thatch- er's predicament evokes my sympathy. She is plainly in need of some good advice. She has always been a bit naïve about the media. When approached by Maureen Orth for an interview for Vanity Fair, she should have flatly refused. Told this would be a 'sympathetic piece', stressing the lack of official provision Britain makes for fall- en leaders, and therefore the need to con- tribute to the Thatcher Foundation, she should have become doubly suspicious. She should have asked herself: what is in it for Vanity Fair to publish a 'sympathetic' interview with Margaret Thatcher? The answer: nothing. The magazine is a prod- uct of radical chic and seeks to please wealthy, fashionable and left-leaning trendies, who have little but contempt for Mrs Thatcher and her ideals. If Mrs Thatcher wanted to give an interview to anyone, and at present she has nothing whatever to gain from such a tactic, then Vanity Fair would be one of the last papers I would recommend.

So it proved. The magazine, far from doing her a favour, boosted its sales by a sensational press release about the inter- view: 'Maggie's Own Crisis in June Vanity Fair'. An extraordinary quote was pro- duced: `Home is where you come to when you have nothing better to do.' Immediate- ly I read it, I knew there must be some- thing wrong. I could not imagine Mrs Thatcher uttering such words as they were presented. Love of home and family is one of her strongest emotions: their impor- tance is something she holds both by instinct and intellectual conviction. Her achievements and opinions are legitimate matters of debate but there can be no doubt, as those who know her well agree, that she is warm-hearted, kind, thoughtful about those around her and especially quick to spot when people are unhappy and come to their aid, a most unusual trait in a Prime Minister. But of course this completely contradicts the official left- wing fantasy image of Thatcher as cold, heartless and power-obsessed. Those who wish to sustain this caricature fell upon the Vanity Fair quote with relish; entire columns and articles were devoted to lip- smacking her-meneutics of its horrific implications.

All this time, a recording and transcript of the full interview existed and the crucial passage surfaced in the Times last week. This makes it clear beyond peradventure, as Lord Goodman would say, that Mrs Thatcher was not saying what she thought about her home: quite the contrary. She was talking about its place in the minds of grown-up children who have left it: 'We are a very close family even though we do our own thing. That is what family life is about. This [home] is where you come to with your problems. This is from where you go to, to do whatever you wish. And sometimes if something happens and we don't see the family as often as we would wish, and they go off I say: "Well, look, home is where you come when you haven't anything better to do. We are always there".' That is exactly what I would have expected Mrs Thatcher to say: to give the view of a family- and home-loving mother who, at the same time, is anxious not to be too possessive. Ms Orth's explanation for what the Times called `a travesty of mis- quotation' — `We did not use the quote in full because it was too long' — strikes me as disingenuous. Nor, I think, can Tina Brown, the editor of the magazine, escape blame. She must surely have known that the 'quotation', as it was publicised, gave an entirely misleading impression. I think she owes it to us to give a full explanation and a defence of her magazine's behaviour — if she can — or to submit an abject apol- ogy. Otherwise we must conclude that, prima facie, Vanity Fair was guilty of an infamous piece of journalistic misconduct.

This seems an appropriate occasion to repeat my advice to anyone asked to give a media interview. First, find out all about the characteristics and track record of the people who want to make use of you. Sec- ond, ask yourself: what is the real motive of these people? What do they hope to get out of me? What's in it for them? Third, push aside all vanity and ask: Will I get anything out of it in return? Unless you are absolutely satisfied on all three heads, refuse. For those who lack long experience in giving interviews, I recommend a further precaution: insist, as an absolute condition of giving an interview, on seeing and approving a transcript of what it is intend- ed to publish (or broadcast). But even this does not always save you from embarrass- ment. Last week the Evening Standard pub- lished an interview with the retiring Chief Rabbi, the excellent Lord Jacobovits. I read it carefully. It was critical of Israel's treatment of the Arab minority but in exactly the way I would have expected, and I concluded that the Chief Rabbi had ap- proved the text before publication, as had in fact happened. But he was deeply upset by the front-page headline with which the paper announced the interview: 'Chief Rabbi shames Israel over Palestine'. The Standard defended the legitimacy of the headline, and most journalists, I think, would side with the paper or argue that, if sin of exaggeration there were, it was ven- ial. The moral again is clear: if you have something to say, make a speech, put it in a press release, best of all write an article. But, if you are asked to give an interview, remember you are accepting a collaborator you may not be able to control and, behind him or her, other collaborators he or she cannot control. In short, dear celebrity, you are gambling in the media casino.

`Where are you going?'