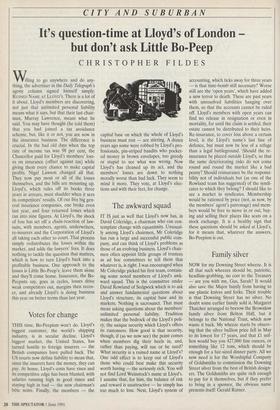 THIS time, Bo-Peepism won't do. Lloyd's biggest customer, the world's shipping industry, is in secular decline. Lloyd's biggest market, the United States, has turned hostile to foreign insurers — the British companies have pulled back. The US courts now define liability to mean that, since the insurers have the money, they can pay. At home, Lloyd's costs have risen and its competitive edge has been blunted, with salaries running high in good times and staying high in bad — the new chairman's bete noire. Finally, the members — the capital base on which the whole of Lloyd's business must rest — are stirring. A dozen years ago some were robbed by Lloyd's pro- fessionals, pin-striped bandits who pocket- ed money in brown envelopes, too greedy or stupid to see what was wrong. Now Lloyd's has cleaned up its act, and the members' losses are down to nothing morally worse than bad luck. They seem to mind it more. They vote, at Lloyd's elec- tions and with their feet, for change.