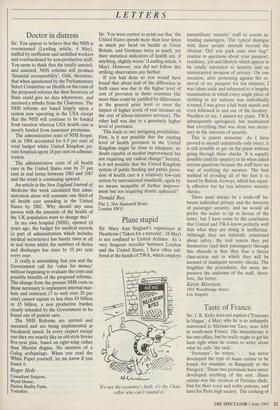 Sir: Mary Ann Sieghart's experience at Heathrow (`Taken for a terrorist', 18 May) is not confined to United Airlines. As a very frequent traveller between London and the United States, I have often suf- fered at the hands of TWA, which employs 'It's not the economy's fault, it's the Chan- cellor who can't control it.' paramilitary 'security' staff to screen in- tending passengers. The typical dialogue with these people extends beyond the obvious Did you pack your own bag?' routine to questions about your passport, residency, job and lifestyle which appear to be totally unrelated to security and an unwarranted invasion of privacy. On one occasion, after protesting against the re- moval of my passport for ten minutes, I was taken aside and subjected to a lengthy examination in which every single piece of clothing in my suitcase was individually x-rayed; I was given a full body search and even followed in and out of the lavatory. Needless to say, I missed my plane. TWA subsequently apologised, but maintained that everything that was done was neces- sary in the interests of security.

This is patent nonsense. As I have proved to myself (admittedly only once), it is still possible to get on the plane without going through these checks. It is equally possible (and far simpler) to lie when asked certain questions because the staff have no way of verifying the answers. The best method of avoiding all of the fuss is to travel by British Airways, which has equal- ly effective but far less intrusive security checks.

There must always be a trade-off be- tween individual privacy and the interests of passenger security, and we would all prefer the scales to tip in favour of the latter, but I have come to the conclusion that United and TWA know perfectly well that what they are doing is ineffectual. Although they are naturally concerned about safety, the real reason they put themselves (and their passengers) through this charade is that they fear a future class-action suit in which they will be accused of inadquate security checks. The lengthier the procedures, the more im- pressive the uniforms of the staff, there- fore, the better.