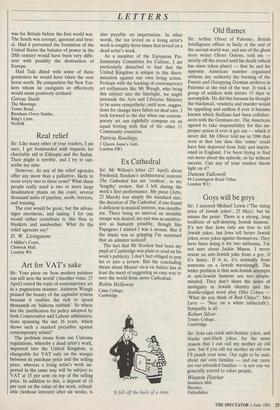 Goys will be goys

Sir: I enjoyed Michael Lewis (`The rising price of Jewish jokes', 25 May), but he misses the point. There is a strong, long tradition of self-denying Jewish humour. It's not that Jews only are free to tell Jewish jokes, but Jews tell better Jewish jokes, even jokes against themselves. They have been doing it for two millennia. I'm not sure about Jackie Mason. I never resent an anti-Jewish joke from a goy, if it's funny. If it is, it's normally from someone on a Jewish wavelength. The wider problem is that non-Jewish attempts at anti-Jewish humour are too simple- minded. They don't share the sense of ambiguity in Jewish identity and the double-edged word play (Mrs Cohen 'What do you think of Red China?': Mrs Levy — 'Nice on a white tablecloth'). Sympathy is all.