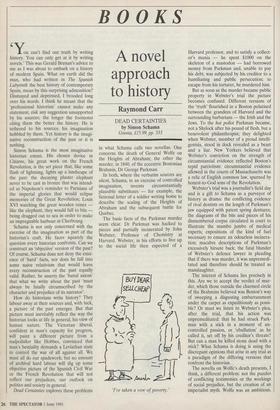 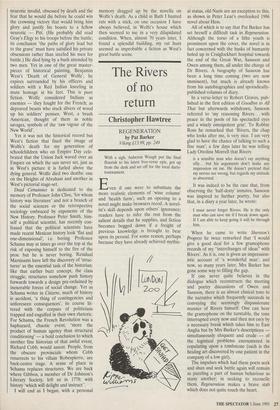 A novel approach to history

DEAD CERTAINTIES by Simon Schama Granta, f15.99, pp. 333 You can't find out truth by writing history. You can only get at it by writing novels.' This was Gerald Brenan's advice to me as I was about to embark on a history of modern Spain. What on earth did the man, who had written in The Spanish Labyrinth the best history of contemporary Spain, mean by this surprising admonition? Dismayed and depressed, I brooded long over his words. I think he meant that the `professional historian' cannot make any statement, risk any suggestion unsupported by his sources; the longer the footnotes citing them the better the history. He is tethered to his sources; his imagination hobbled by them. Yet history is the imagi- native reconstruction of the past or it is nothing.

Simon Schama is the most imaginative historian extant. His chosen device in Citizens, his great work on the French Revolution, is the set piece that, like some flash of lightning, lights up a landscape of the past: the decaying plaster elephant never to be cast in bronze that was intend- ed as Napoleon's reminder to Parisians of the imperial glories that would eclipse memories of the Great Revolution; Louis XVI watching the great wooden cones like the elephant, they would fall to bits being dragged out to sea in order to make an impregnable harbour at Cherbourg.

Schama is not only concerned with the exercise of the imagination as part of the historian's craft. He faces squarely the question every historian confronts. Can we construct an 'objective' version of the past? Of course, Schama does not deny the exist- ence of 'hard' facts, nor does he fall into some naive relativism that would leave every reconstruction of the past equally valid. Rather, he asserts the 'banal axiom' that what we write about the past 'must always be fatally circumscribed by the character and prejudice of its narrator'.

How do historians write history? They labour away at their sources and, with luck, a picture of the past emerges. But that picture must inevitably reflect the way the historian looks at life in general, his view of human nature. The Victorian liberal, confident in man's capacity for progress, will paint a different picture from a realpolitiker like Hobbes, convinced that man's bestiality demands a Leviathan state to control the war of all against all. We must all do our spadework; but no amount of archival hard labour will dig up some objective picture of the Spanish Civil War or the French Revolution that will not reflect our prejudices, our outlook on politics and society in general.

Dead Certainties explores these problems in what Schama calls two novellas. One concerns the death of General Wolfe on the Heights of Abraham; the other the murder, in 1840, of the eccentric Bostonian Brahmin, Dr George Parkman.

In both, where the verbatim sources are silent, Schama, in an exercise of controlled imagination, invents circumstantially plausible substitutes — for example, the fictional letter of a soldier writing home to describe the scaling of the Heights of Abraham and the subsequent battle for Quebec.

The basic facts of the Parkman murder seem clear. Dr Parkman was hacked to pieces and partially incinerated by John Webster, Professor of Chemistry at Harvard. Webster, in his efforts to live up to the social life then expected of a `I've taken a vow of poverty.' Harvard professor, and to satisfy a collect- or's mania — he spent $1000 on the skeleton of a mastodon — had borrowed money from Parkman and, unable to pay his debt, was subjected by his creditor to a humiliating and public persecution; to escape from his torturer, he murdered him.

But as soon as the murder became public property in Webster's trial the picture becomes confused. Different versions of the 'truth' flourished in a Boston polarised between the grandees of Harvard and the surrounding barbarians — the Irish and the Jews. To the hoi polloi Parkman became, not a Shylock after his pound of flesh, but a benevolent philanthropist; they delighted when Webster, member of a proud intelli- gentsia, stood in dock revealed as a beast and a liar. New Yorkers believed that Webster's conviction on the strength of circumstantial evidence reflected Boston's tepid patriotism: circumstantial evidence allowed in the courts of Massachusetts was a relic of English common law, spurned by honest-to-God sons of the Revolution.

Webster's trial was a journalist's field day and is a gift to Schama as a purveyor of history as drama: the conflicting evidence of rival dentists on the length of Parkman's jaw equipped with patent spring dentures; the diagrams of the bits and pieces of his dismembered corpse circulated in court to illustrate the mumbo jumbo of medical experts; expositions of the kind of fuel necessary to ensure an odourless incinera- tion; macabre descriptions of Parkman's excessively hirsute back; the fatal blunder of Webster's defence lawyer in pleading that if there was murder, it was unpremedi- tated and therefore should be treated as manslaughter.

The interest of Schama lies precisely in this. Are we to accept the verdict of mur- der, which those outside the charmed circle of the Brahmins believed was Boston's way of sweeping a disgusting embarrassment under the carpet as expeditiously as possi- ble? Or must we listen to Webster's plea, after the trial, that his action was unpremeditated: that he had struck Park- man with a stick in a moment of un- controlled passion, or `ebullution' as he called it, set off by his creditor's threats? But can a man be killed stone dead with a stick? What Schama is doing is using the discrepant opinions that arise in any trial as a paradigm of the differing versions that confront the historian.

The novella on Wolfe's death presents, I think, a different problem: not the puzzles of conflicting testimonies or the workings of social prejudice, but the creation of an imperialist myth. Wolfe was an ambitious, neurotic invalid, obsessed by death and the fear that he would die before he could win the crowning victory that would bring him glory and justify his boasts to a fellow neurotic — Pitt. (He probably did read Gray's Elegy to his troops before the battle; its conclusion 'the paths of glory lead but to the grave' must have satisfied his private obsessions rather than steeled his men for battle.) He died lying by a bush attended by two men. Yet in one of the great master- pieces of historical painting, Benjamin West's 'Death of General Wolfe', he expires surrounded by his officers and soldiers with a Red Indian kneeling in mute homage at his feet. This is pure fiction. Wolfe considered Indians as enemies — they fought for the French; as depraved beasts who stuck slivers of wood up his soldiers' penises. West, a brash American, thought of them as noble savages, symbols of the 'raw vigour of the New World'.

Yet it was not the historical record but West's fiction that fixed the image of Wolfe's death for my generation of schoolchildren who on Empire Day cele- brated that the Union Jack waved over an Empire on which the sun never set, just as in West's picture it is furled above the dying general. Wolfe died two deaths: one on the Heights of Abraham and another in West's pictorial stage-set.

Dead Certainties is dedicated to the memory of Professor John Clive, 'for whom history was literature' and not a branch of the social sciences or the retrospective sociology embraced by exponents of the New History. Professor Peter Smith, him- self a political scientist, has recently con- fessed that the political scientists have made recent Mexican history look 'flat and one-dimensional', i.e. boring. Professor Schama may at times go over the top at the risk of exposing himself to the fire of the pros: but he is never boring. Residual Marxisants have left the discovery of 'struc- tures' as the essential task of the historian: like that earlier buzz concept, the class struggle, structures somehow push history forwards towards a design pre-ordained by inexorable forces of social change. Yet as Schama writes in Citizens, much of history is accident, 'a thing of contingencies and unforeseen consequences', its course lit- tered with the corpses of politicians trapped and engulfed in their own rhetoric. For Schama, the French Revolution was a haphazard, chaotic event, 'more the product of human agency than structural conditioning' — a bold conclusion to which another fine historian of that awful event, Richard Cobb, would assent. People, from the obscure provincials whom Cobb resurrects to his villain Robespierre, are back-centre stage. A sense of place in Schama replaces structures. We are back where Gibbon, a member of Dr Johnson's Literary Society, left us in 1778: with history 'which will delight and instruct '.

I will end as I began, with a personal memory dragged up by the novella on Wolfe's death. As a child in Bath I hunted rats with a stick, on one occasion I have always believed, in Wolfe's house which then seemed to me in a very dilapidated condition. When, almost 70 years later, I found a splendid building, my rat hunt seemed as improbable a fiction as West's great battle scene.