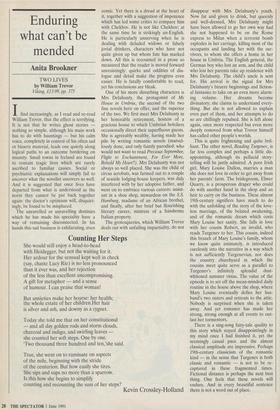 Enduring what can't be mended

TWO LIVES by William Trevor Viking, f13.99, pp. 375 Ifind increasingly, as I read and re-read William Trevor, that the effect is terrifying. It is not that he writes ghost stories nothing so simple, although his main work has to do with hauntings — but his calm voice, completely in control of his often sad or bizarre material, leads one quietly along logical paths to an outcome bordering on insanity. Small towns in Ireland are found to contain tragic lives which are rarely ascribed to familiar causes. Social or psychiatric explanations will simply fail to uncover what the novelist uncovers so well. And it is suggested that once lives have departed from what is understood as the norm they cannot be put back together again: the doctor's optimism will, disquiet- ingly, be found to be misplaced.

The unravelled or unravelling destinies which he has made his speciality have a way of remaining disconnected. In his hands this sad business is exhilarating, even comic. Yet there is a dread at the heart of it, together with a suggestion of impotence which has led some critics to compare him with Chekhov. He is not like Chekhov; at the same time he is strikingly un-English. He is particularly unnerving when he is dealing with deluded widows or falsely jovial drinkers, characters who have not quite given up but whom fate has marked down. All this is recounted in a prose so measured that the reader is moved forward unresistingly: quirks and oddities of dia- logue and detail make the progress even easier. He is fatally comfortable to read, yet his conclusions are bleak.

One of his more disturbing characters is Mrs Delahunty, the protagonist of My House in Umbria, the second of the two fine novels here on offer, and the superior of the two. We first meet Mrs Delahunty in her honorable retirement, hostess of a gracious house to which Umbrian hoteliers occasionally direct their superfluous guests. She is agreeably wealthy, having made her pile by writing romantic novels (marvel- lously done, and only faintly parodied: who would not want to read Precious September, Flight to Enchantment, For Ever More, Behold My Heart?). Mrs Delahunty was not always so well placed. She was the child of circus acrobats, was farmed out to a couple of seaside lodging-house keepers, was duly interfered with by her adoptive father, and went on to embrace various careers: assist- ant in a shoe shop, stewardess on the S.S. Hamburg, madame of an African brothel, and finally, after her brief but flourishing literary career, mistress of a handsome Italian property.

The grotesqueries, which William Trevor deals out with unfailing impartiality, do not disappear with Mrs Delahunty's youth. Now fat and given to drink, but queenly and well-dressed, Mrs Delahunty might have been allowed to go her own way had she not happened to be on the Rome express to Milan when a terrorist bomb explodes in her carriage, killing most of the occupants and landing her with the sur- vivors, to whom she offers a home in her house in Umbria. The English general, the German boy who lost an arm, and the child who lost her parents take up residence with Mrs Delahunty. The child's uncle is sent for. His arrival is the signal for Mrs Delahunty's bizarre beginnings and fiction- al fantasies to take on an even more alarm- ing volume. Her dreams become divinatory; she claims to understand every- thing. But she- is not allowed to explain even part of them, and her attempts to do so are chillingly repulsed. She is left alone again, once more respected but even more deeply removed from what Trevor himself has called other people's worlds.

This is quite frightening and quite bril- liant. The other novel, Reading Turgenev, is far less complex and perhaps a little dis- appointing, although its pellucid story- telling will be justly admired. A poor Irish girl, Mary Louise Dallon, marries a man she does not love in order to get away from her parents' farm. The bridegroom, Elmer Quarry, is a prosperous draper who could do with another hand in the shop and an heir to carry on the business. These almost 19th-century signifiers have much to do with the unfolding of the story of the love- less marriage, of the belated awakening, and of the romantic dream which costs Mary Louise her sanity. She falls in love with her cousin Robert, an invalid, who reads Turgenev to her. This cousin, indeed this branch of Mary Louise's family, whom we know quite intimately, is introduced carelessly into the narrative in a way which is not sufficiently Turgenevian, nor does the country churchyard in which the cousins meet quite serve as a parallel to Turgenev's infinitely splendid dust- whitened summer vistas. The value of the episode is to set off the mean-minded daily routine in the house above the shop, where Mary Louise eventually defies her hus- band's two sisters and retreats to the attic. Nobody is surprised when she is taken away. And yet romance has made her strong, strong enough at all events to out- last her tormentors.

There is a sing-song fairy-tale quality to this story which stayed disappointingly in my mind once I had finished it, yet the seemingly casual pace and the almost classical amplitude are impressive. Perhaps 19th-century classicism of the romantic kind — in the sense that Turgenev is both classic and romantic — is not to be re- captured in these fragmented times. Fictional distance is perhaps the next best thing. One feels that these novels will endure. And in every beautiful sentence there is not a word out of place.