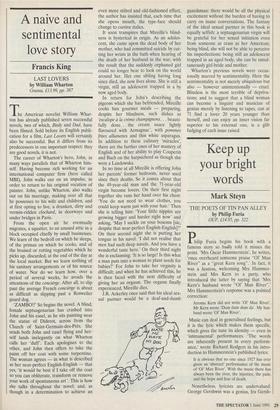 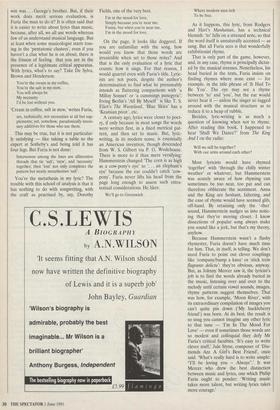 Keep up your bright words

THE POETS OF TIN PAN ALLEY by Philip Furia OUP, £14.95, pp. 322 Philip Furia begins his book with a famous story so badly told it misses the point. 'Mrs Oscar Hammerstein', he writes, `once overheard someone praise "01' Man River" as a "great Kern song".' In fact, it was a hostess, welcoming Mrs Hammer- stein and Mrs Kern to a party, who introduced the latter by saying that 'Mrs Kern's husband wrote "01' Man River".' Mrs Hammerstein's response was a pointed correction:

Music can deal in generalised feelings, but it is the lyric which makes them specific, which gives the tune its identity — even in inmrumental' performances. The words are inherently present in every perform- ance,' wrote Richard Rodgers in his intro- duction to Hammerstein's published lyrics:

It is obvious that no one since 1927 has ever given an 'abstract' performance of the music of '01' Man River'. With the music there has always been the river, the injustice, the pain, and the hope and fear of death.

Nonetheless, lyricists are undervalued: George Gershwin was a genius, Ira Gersh- win was . . . George's brother. But, if their work does merit serious evaluation, is Furia the man to do it? It is often said that it is easier to write about lyrics than music, because, after all, we all use words whereas few of us understand musical language. But at least when some musicologist starts toss- ing in the 'pentatonic clusters', even if you haven't a clue what he is on about, there is the frisson of feeling that you are in the presence of a legitimate critical apparatus. With lyrics, what's to say? Take De Sylva, Brown and Henderson:

You're the cream in my coffee, You're the salt in my stew, You will always be My necessity I'd be lost without you.

are, technically, not necessities at all but sup- plements; yet, somehow, paradoxically neces- sary additives for those who use them.

This may be true, but it is not particular- ly satisfying — like taking a table to the expert at Sotheby's and being told it has four legs. But Furia is not done:

Interwoven among the lines are alliterative threads that tie 'salt', 'stew', and 'necessity' together; then 'lost' not only completes the pattern but neatly metathesises 'salt'.

You're the metathesis in my lyric? The trouble with this school of analysis is that it has nothing to do with songwriting, with the craft as practised by, say, Dorothy Fields, one of the very best.

I'm in the mood for love,

On the page, it looks like doggerel. If you are unfamiliar with the song, how would you know that those words are irresistible when set to those notes? And that is the only evaluation of a lyric that counts: how it sings. For that reason, I would quarrel even with Furia's title. Lyric- ists are not poets, despite the author's determination to find what he presumably intends as flattering comparisons with 'a Millay Sonnet' or 'a cummings panegyric'; Irving Berlin's 'All By Myself ' is like T. S. Eliot's The Wasteland, 'Blue Skies' has a `Keatsian pivot', etc.

A century ago, lyrics were closer to poet- ry, if only because in most songs the words were written first, in a fixed metrical pat- tern, and then set to music. But, lyric- writing, in its modern sense, is essentially an American invention, though descended from W. S. Gilbert via P. G. Wodehouse. There is more to it than mere versifying: Hammerstein changed 'The corn is as high as a cow-pony's eye' to . an elephant's eye' because the ear couldn't catch 'cow- pony'. Furia never lifts his head from the page long enough to assess such extra- textual considerations. He likes:

We'll go to Greenwich Where modern men itch To be free.

As it happens, this lyric, from Rodgers and Hart's Manhattan, has a technical blemish: `to' falls on a stressed note, so that the word itself is unnaturally accented — as sung. But all Furia sees is that wonderfully exhibitionist rhyme.

That is only part of the game, however, and, in any case, rhyme is principally dictat- ed by the musical stresses. Nonetheless, his head buried in the texts, Furia insists on finding rhymes where none exist — for example, in the title phrase of 'It Had To Be You'. The eye may see a rhyme between `to' and 'you', but the ear would never hear it — unless the singer so tugged around with the musical structure as to reduce it to a heap of rubble.

Besides, lyric-writing is as much a question of knowing when not to rhyme. After reading this book, I happened to hear 'Shall We Dance?' from The King And I on the radio:

Will we still be together?

With our arms around each other?

Most lyricists would have rhymed `together' with 'through the chilly winter weather' or whatever, but Hammerstein was acutely aware of how rhyming can sometimes be too neat, too pat and can therefore obliterate the sentiment. Anna and the King are hesitant, faltering, and the ease of rhyme would have seemed glib, off-hand. By retaining only the `-ther' sound, Hammerstein nudges us into notic- ing that they're moving closer. I know dissections of popular song always make you sound like a jerk, but that's my theory, anyhow.

Because Hammerstein wasn't a flashy rhymester, Furia doesn't have much time for him. That, in itself, is telling. We don't need Furia to point out clever couplings like 'company/bump a knee' or 'stick to/in flagrante delictu': they're obvious, anyway. But, as Johnny Mercer saw it, the lyricist's job is to find the words already buried in the music, listening over and over to the melody until certain vowel sounds, images, rhyme patterns suggest themselves. That was how, for example, 'Moon River', with its extraordinary compilation of images you can't quite pin down (`My huckleberry friend') was born. At its best, the result is so snug you cannot imagine any other lyric to that tune — 'I'm In The Mood For Love' — even if sometimes those words are so modest and colloquial they defy Mr Furia's critical faculties. 'It's easy to write clever stuff,' Jule Styne, composer of 'Dia- monds Are A Girl's Best Friend', once said. 'What's really hard is to write simple: "I'll be loving you – Always".' It was Mercer who drew the best distinction between music and lyrics, one which Philip Furia ought to ponder: 'Writing music takes more talent, but writing lyrics takes more courage.'