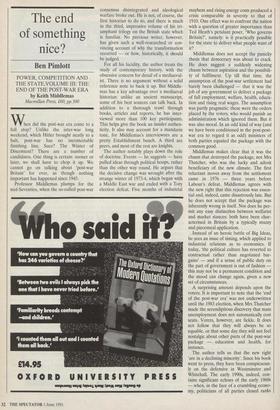 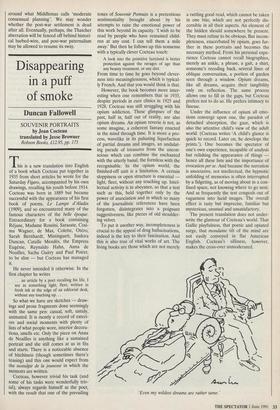 The end of something nice?

POWER, COMPETITION AND THE STATE,VOLUME III: THE END OF THE POST-WAR ERA by Keith Middlemas Macmillan Press, £60, pp.500

hen did the post-war era come to a full stop? Unlike the inter-war long weekend, which Hitler brought neatly to a halt, post-war has no incontestable finishing line. Suez? The Winter of Discontent? There are a number of candidates. One thing is certain: sooner or later, we shall have to chop it up. We cannot go on talking about 'post-war Britain' for ever, as though nothing important has happened since 1945.

Professor Middlemas plumps for the mid-Seventies, when the so-called post-war consensus disintegrated and ideological warfare broke out. He is not, of course, the first historian to do so, and there is much in the third, impressive volume of his tri- umphant trilogy on the British state which is familiar. No previous writer, however, has given such a well-researched or con- vincing account of why the transformation occurred — or how, historically, it should be judged.

For all his lucidity, the author treats the study of contemporary history, with the obsessive concern for detail of a mediaeval- ist. There is no argument without a solid reference note to back it up. But Middle- mas has a key advantage over a mediaeval historian: unlike an ancient manuscript, some of his best sources can talk back. In addition to a thorough trawl through books, articles and reports, he has inter- viewed more than 100 key participants. This helps give the book an insider authen- ticity. It also may account for a mandarin tone, for Middlemas's interviewees are a pretty Establishment bunch. A third are peers, and most of the rest are knights.

The author notably plays down the role of doctrine. Events — he suggests — have pulled ideas through political hoops, rather than the other way round. He argues that the decisive change was wrought after the strange winter of 1973-4, which began with a Middle East war and ended with a Tory election defeat. Five months of industrial mayhem and rising energy costs produced a crisis comparable in severity to that of 1910. One effect was to confront the nation with a question of greater importance than Ted Heath's petulant poser, 'Who governs Britain?', namely: is it practically possible for the state to deliver what people want of it?

Middlemas does not accept the panicky thesis that democracy was about to crack. He does suggest a suddenly widening chasm between aspiration and the possibili- ty of fulfilment. Up till that time, the assumption of the post-war settlement had barely been challenged — that it was the job of any government to deliver a package of full employment, welfare, health, educa- tion and rising real wages. The assumption was partly pragmatic: these were the orders placed by the voters, who would punish an administration which ignored them. But it was also moral. In an odd kind of way (and we have been conditioned in the post-post- war era to regard it as odd) ministers of both parties equated the package with the common good.

Middlemas makes clear that it was the chasm that destroyed the package, not Mrs Thatcher, who was the lucky and adroit beneficiary of the new climate. The first reluctant moves away from the settlement came in 1976 — three years before Labour's defeat. Middlemas agrees with the new right that this rejection was essen- tial and, indeed, came disastrously late. But he does not accept that the package was inherently wrong in itself. Nor does he per- mit any easy distinction between welfarist and market stances: both have been char- acterised in Britain by a typically muzzy and piecemeal application.

, Instead of an heroic battle of Big Ideas, he sees an issue of timing, which applied to industrial relations as to economics. If today, 'the political culture has reverted to contractual rather than negotiated bar- gains' — and if a sense of public duty on the part of government is out of fashion this may not be a permanent condition and the mood can change again, given a new set of circumstances.

A surprising amount depends upon the voters. It is important to note that the 'end of •the post-war era' was not underwritten until the 1983 election, when Mrs Thatcher made the serendipitous discovery that mass unemployment does not automatically cost seats. Voters, however, are fickle. It does not follow that they will always be so equable, or that some day they will not feel nostalgic about other parts of the post-war package — •education and health, for instance.

The author tells us that the new right `are in a declining minority'. Since his book went to press, they have been conspicuous- ly on the defensive in Westminster and Whitehall. The early 1990s, indeed, con- tains significant echoes of the early 1960s — when, in the face of a crumbling econo- my, politicians of all parties closed ranks around what Middlemas calls 'moderate consensual planning'. We may wonder whether the post-war settlement is dead after all. Eventually, perhaps, the Thatcher aberration will be fenced off behind histori- cal barbed-wire, and post-war paternalism may be allowed to resume its sway.