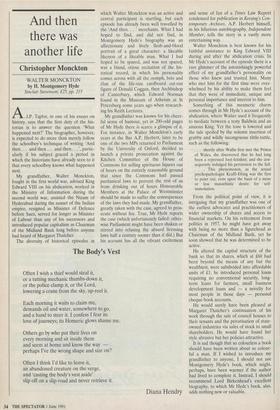 And then there was another life

WALTER MONCKTON by H. Montgomery Hyde Sinclair Stevenson, £25, pp. 215 A.J.P. Taylor, in one of his essays on history, says that the first duty of the his- torian is to answer the question 'What happened next?' The biographer, however, is expected to do more than merely follow the schoolboy's technique of writing 'And then... and then ... and then... ', partic- ularly if his subject graced a period in which the historians have already seen to it that every schoolboy knows what happened next.

My grandfather, Walter Monckton, fought in the first world war, advised King Edward VIII on his abdication, worked in the Ministry of Information during the second world war, assisted the Nizam of Hyderabad during the sunset of the Indian empire, resigned as Minister of Defence before Suez, served for longer as Minister of Labour than any of his successors and introduced popular capitalism as Chairman of the Midland Bank long before anyone had heard of Margaret Thatcher.

The diversity of historical episodes in which Walter Monckton was an active and central participant is startling, but each episode has already been well travelled by the 'And then. . . ' merchants. What I had hoped to find, and did not find, in Montgomery Hyde's biography was an affectionate and lively flesh-and-blood portrait of a great character: a likeable likeness of a likeable man. What I had hoped to be spared, and was not spared, was a bland, otiose recitation of the his- torical record, in which his personality comes across with all the oomph, brio and élan of the life-size cardboard cut-out figure of Donald Coggan, then Archbishop of Canterbury, which Edward Norman found in the Museum of Atheism at St Petersburg some years ago when research- ing his Reith Lectures.

My grandfather was known for his cheer- ful sense of humour, yet in 200-odd pages of Mr Hyde there is scarce a glimpse of it. For instance, in Walter Monckton's early years at the Bar A.P. Herbert, later to be one of the two MPs returned to Parliament by the University of Oxford, decided to launch a private prosecution against the Kitchen Committee of the House of Commons for selling spirituous liquors out of hours on the entirely reasonable ground that since the Commons had passed puritanical laws to prevent the rest of us from drinking out of hours Honourable Members at the Palace of Westminster should be made to suffer the consequences of the laws they had made. My grandfather, greatly taken with the case, agreed to pros- ecute without fee. True, Mr Hyde reports the case (which unfortunately failed: other- wise Parliament might have been shaken or stirred into relaxing the absurd licensing laws half a century sooner than it did.) But his account has all the vibrant excitement

and sense of fun of a Times Law Report condensed for publication in Keesing's Con- temporary Archives. A.P. Herbert himself, in his hilarious autobiography, Independent Member, tells the story in a vastly more entertaining way.

Walter Monckton is best known for his faithful assistance to King Edward VIII during and after the abdication crisis. In Mr Hyde's account of the episode there is a rare glimmer of the astonishingly powerful effect of my grandfather's personality on those who knew and trusted him. Many who met him for the first time were over- whelmed by his ability to make them feel that they were of immediate, unique and personal importance and interest to him.

Something of this mesmeric charm comes through in Mr Hyde's account of the abdication, where Walter used it frequently to mediate between a testy Baldwin and an anxious King. Yet the tone is lowered and the tale spoiled by the solemn insertion of grubby and wildly incongruous tittle-tattle, such as the following:

. . . shortly after Wallis first met the Prince of Wales, she discovered that he had long been a repressed foot-fetishist; and she con- sequently indulged his perversion to the full. . . . This phenomenon, as the sexual psychopathologist Krafft-Ebing was the first to point out, rests upon the basis of a more or less masochistic desire for self- immolation.

From the political point of view, it is intriguing that my grandfather was one of the earliest advocates and practitioners of wider ownership of shares and access to financial markets. On his retirement from politics in 1957, he might have got away with being no more than a figurehead as Chairman of the Midland Bank, yet he soon showed that he was determined to be active.

He altered the capital structure of the bank so that its shares, which at £60 had been beyond the means of any but the wealthiest, were subdivided into affordable units of £1; he introduced personal loans requiring no conventional security, long- term loans for farmers, small business development loans and — a novelty for most people in those days — personal cheque-book accounts.

He would surely have been pleased at Margaret Thatcher's continuation of his work through the sale of council houses to their tenants and the privatisation of state- owned industries via sales of stock to small shareholders. He would have found her style abrasive but her policies attractive.

It is sad though that so colourless a book should have been written about so colour- ful a man. If I wished to introduce my grandfather to anyone, I should not use Montgomery Hyde's book, which might, perhaps, have been warmer if the author had lived to complete it. Instead, I should recommend Lord Birkenhead's excellent biography, to which Mr Hyde's book, alas, adds nothing new or valuable.